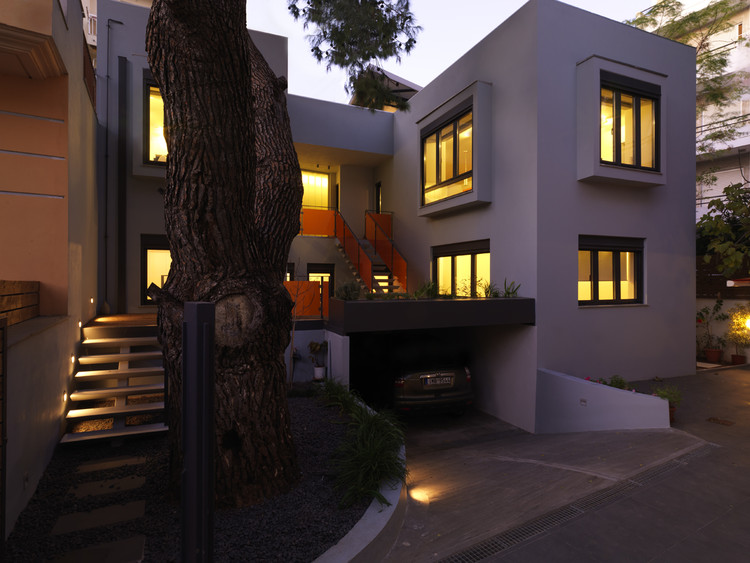 Text description provided by the architects. The 195 sqm house in Aghia Paraskevi, Attica, was built to replace a previous detached house, which had been condemned after the 1999 earthquake. It sits on a 245 sqm lot, last in a row of properties of a cul-de-sac. A prominent feature that has been preserved is a towering pine tree standing next to the entrance, a signpost for visitors.

A basic restriction in replacing quake struck buildings is that the footprint, area and mass of the original building must be adhered to. The prerequisite prescribes the disposition of the building in the site, though not the form it will assume. Since the original house had been composed of two volumes (main residence and guest house) the main concept attempts to join the two, creating thus a ‘U’ shaped plan.

A main feature of the new building’s form is to be found in the connection of the two volumes, effected by means of a transparent passage, which maintains an outdoor feel while alluding to the form of the original building. The building is characterized by three ‘architectural protrusions’ jutting out from its facade, which create an intermediate space between indoors and outdoors, and can function as sitting areas or as benches. Though the surrounding buildings ‘weigh down’ on the residence and overshadow it, it still manages to identify openings and bring the light to all inside spaces.

As far as the program is concerned, the house comprises an open plan sitting room plus kitchen, a study area, two large bedrooms, a storage space, bathroom and water closet, and ample book cases in the rooftop shed.