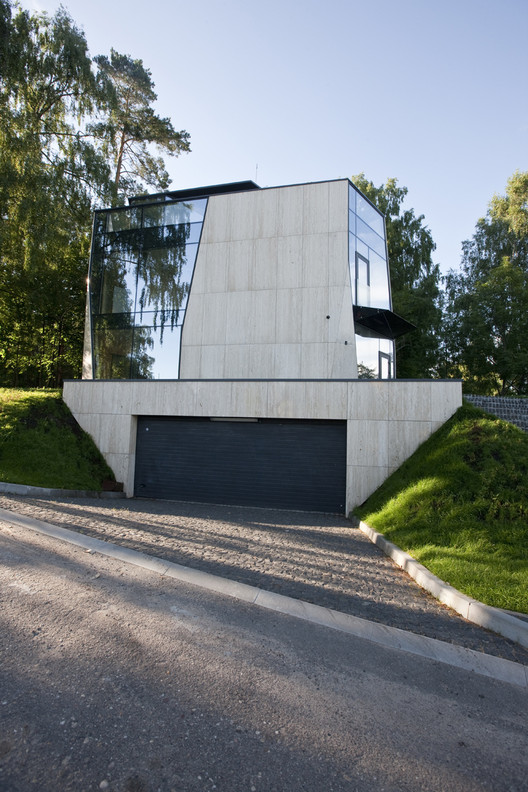 Text description provided by the architects. Birštonas is one of the four famous resorts of Lithuania. Balneological and mud therapy resort is famous for it‘s local mineral water. The city of Birštonas with it‘s 3200 population is situated in the loop of the biggest river in the very heart of Lithuania.

During the Soviet period, the city of Birštonas was inflated with convalescent houses and sanatoriums, which were popular among the people of Soviet Union, despite that, the city was floundering morally. After gaining independence, the small city of Birtštonas has truly become cosy and calm and is keeping up to european standarts. The price of Birštonas land increased fast and free plots are hardly to find.

The owners bought their plot on a small hill, on the border of the park surrounded with trees. The plot is unique for it‘s street-free space, it‘s an opened part of the park. The fact that plot wasn‘t included as regular part of street, raised the architectural idea of the house. The garage was constructed under the hill, which formed the regular bulk into a multi-edged amber like construction which has elegantly risen in between the trees of the park. It neither has a regular interior plan, orientation or direction. Obviously the idea of enclosing the area was not even an issue.

It is a 4 storey summer-house. 3 space garage, storage and boiler-room are situated in the basement. Ground floor has a lobby, living-room, kitchen and sitting room. First-floor locates all the sleeping areas as for the second-floor one already steps into a terrace which overlooks the forest, river and a little chapel. The house is constructed to get all the advantages of the wonderful nature that Birstonas has to offer. Whilst being on the 2nd floor terrace, one gets a total privacy ( not to forget that the house has no fence ) and a full view of the city at the same time having the opportunity to enjoy the sun and the sough of the forest for the entire day.

The facade of the house is covered with polished travertine panels. The details of Aluminium on the vitrines represent/expose different perspectives of each environment at the same time making the architectural structure interesting for the eye.