Save
Update: Shenzhen Stock Exchange by OMA
Share
Or
Copy

The NASDAQ equivalent Shenzhen Stock Exchange by OMA, continues to progress forward nearing completion. The latest photographs of the new building, which poses a strong representation of capitalism in China, highlight the robust exoskeletal grid and the and complexity of construction.

“For millennia, the solid building stands on a solid base; it is an image that has survived modernity. Typically, the base anchors a structure and connects it emphatically to the ground. The essence of the stock market is speculation: it is based on capital, not gravity. In the case of Shenzhen’s almost virtual stock market, the role of symbolism exceeds that of the program – it is a building that has to represent the stock market, more than physically accommodate it. It is not a trading arena with offices, but an office with virtual organs that suggest and illustrate the process of the market.”

More construction photographs of the Shenzhen Stock Exchange after the break. 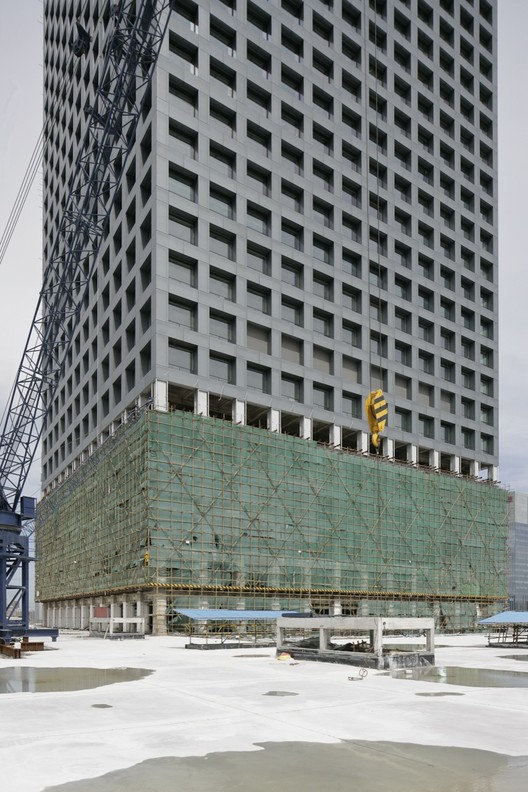 The project is based on pure volumes, a combination of a tower and a podium suspended 36m high. The podium is one of the biggest cantilevers in the world, an operation that liberates the ground to create a big public plaza which is visually connected (representing the new economic openness) to the lower part of the tower and the podium itself, the places were the stock exchange operations take place. Above the podium, there is a series of office space for internal operations of the SSE, totaling 200,000sqm for the entire building.

“The tower’s structure is a robust exoskeletal grid overlayed with a patterned glass skin – the first time such glass has been used for an exterior at this scale. The patterned glass reveals the detail and complexity of construction while creating a mysterious crystalline effect as the tower responds to light: sparkling during bright sunshine, mute on an overcast day, enigmatic at dusk, glimmering during rain and glowing at night.”