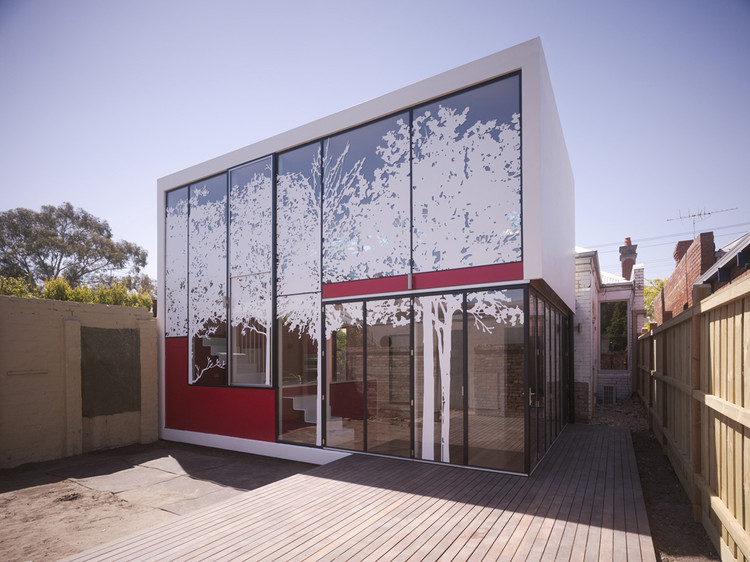 Text description provided by the architects. Andrew Maynard Architects shared with us the Tattoo house located in Victoria, Australia. It features a interesting way to filter light and views. Architect's description, more photographs and drawings after the break.

The Tattoo house is Andrew Maynard's latest built project. The building is a small extension to an existing 3 bedroom house in Fitzroy North, Victoria.

The client's brief was delightfully loose; provide new living and kitchen space for a growing young family and create an open plan with plenty of natural light and high ceilings. A kitchen and a flexible work space incorporated into the extension rounded out the brief. By balancing these desires against the various restrictions of budget, town planning requirements and available space, tactics were employed to make everything within the space perform multiple tasks, both functionally and conceptually.

The tight budget generated many of the design decisions. The form is a simple box- the strongest form an architect can achieve at a bargain basement price. From the starting point of the simple box we began to express the addition as a covered external space. The original house is very internalised. The extension was to be as open as possible so that when one crosses the threshold between the original and new structures they felt as though they were entering a covered deck rather than additional internalised space.

Generally we try to avoid having separate ideas performing different functions. We try to be economic with our concepts and make a couple of key ideas achieve multiple and varied tasks. Every element within the Tattoo House needed to perform multiple functions for maximum return- hence the kitchen bench becomes part of the stair, and the screening required by council reflects heat and glare away from the expansive windows.

Despite these challenges a double story, non-domestic scale space was achieved with a basic palette of materials.

The new architecture was approached as no more than a deck. Through bringing the external decking up to the original back wall of the home, then turning and folding it where existing structures were encountered, a covered open backyard was effectively created. The detailing of the decking timbers reveals the wrapping pattern further.

Bi-fold doors retreat to reveal a completely open corner, framed by the box while allowing uninterrupted flow between the extension and the backyard underneath, merging these spaces while retaining the edge of each. The folding doors and post-less corner make the form of the structure appear precarious. The structure playfully feels as though it defies gravity and may topple.

The stickers became a multi-purpose solution to the dual requirements of council overlooking regulations and glare reduction.Legislation which dictates a 75% opacity to second-storey windows was resolved with UV stable stickers rather than expensive and elaborate screening. The tree supergraphic creates playful and ever-changing shadows across the interior spaces and is composed of images taken in the local park.

The tattoo was conceived as a continuation of the tree graphic around the simple white box- to soften the impact of this modern addition to a resolutely 19th-century neighbourhood. Furthermore the design was a neighbourly gesture. The household to the west has a manicured garden which is very important to the resident. A stencil of vegetation was created in-house and applied by the AMA team in a covet operation to give the neighbour an additional, though less than manicured, layer of garden.

The house isn't as "green" as most of our other projects as it was not an issue that the client was keen to pursue. The client wanted the south facade to be completely glass so that there is a very strong connection with the yard and views to the city from the 2nd level. Regardless we made the design as green as you can make glass box. A few of the key tactics were :

1. Control the northern glazing. The horizontal slot windows on the northern facade bring direct winter sunlight from over the existing roof into the extension, while cutting out the high summer sun. .

2. Thermally protect the southern facade as much as possible. A large glass southern facade is always going to loose a lot of heat in winter. Therefore we double glazed the entire facade and specified extremely efficient seals for all the doors and windows.

3. We also installed a water tank between the extg house and the extension which is connected to toilets and the garden.

4. Venting - we have small windows on the upper north west corner of the extension and very large openings on the bottom of the south east corner. This creates a surprisingly effective chimney effect to drag heat thru the voids and out of the extension. Once the garden becomes established with lush indigenous planting we hope to get a natural evaporative cooling effect to optimise the through breezes.

5. Insulation - the roof and walls are clad in an extremely efficient foam product that has been rendered. This, combined with the high R value insulation within the walls and roof protect the extension from the hard morning and arvo sun in summer, while reducing heat loss in winter.