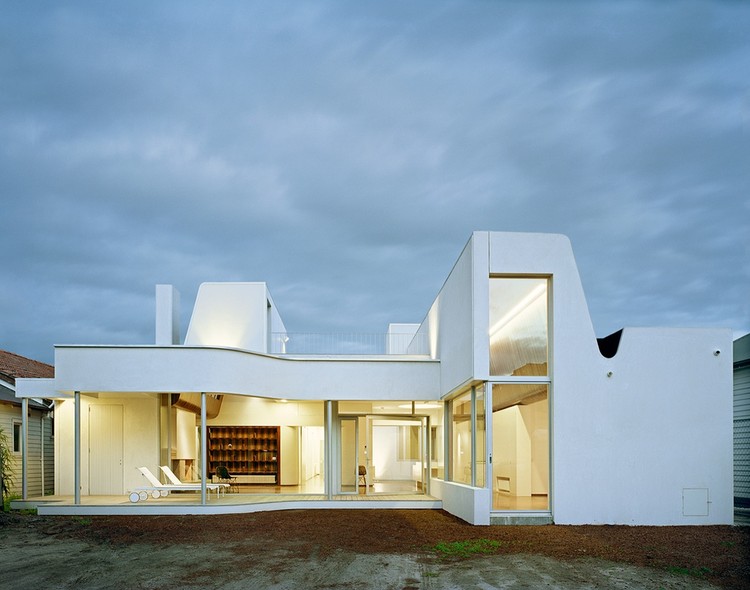 Text description provided by the architects. Located on a site with two street frontages, about 5 Km from the central business district, the house is part original and part addition- linked by a corridor and separated by a courtyard. The original fronts a picturesque street-scape, rebuilt in sympathy with its Art Deco architecture. The new work, containing the living spaces, is designed to operate as a facade to the rear street and as “sculptural form” to a future garden. It is constructed of a series of dynamic volumes oriented to capture sunlight to the interior.

Conceptually, the interior is an abstraction in black and white- curved black veneer punctuates the space vertically and white walls modulate the space horizontally. Although the use of curves connects with the natural form of the tree, bending the timber across its grain introduces tension and abstraction not normally associated with “feature” decoration. The timber is sourced from the trunk of a single tree- allowing the entire variation of natural grain to be represented. The outside of the trunk, where the grain is younger, is located high in the space and it progressively descends to the joinery and intimate spaces where the core is dense and dark.

The exterior is detailed to reflect the finesse of a line drawing. Edges are defined by aluminium sections giving the mass a lightness of tectonic representation. In some instances steel windows are positioned to sit in line with the façade so as to appear drawn on the wall rather than penetrating the wall.

A corridor with a continuous fluorescent beam intervenes the original part of the house, and connects the living spaces with two new bathrooms. The first bathroom is clad in black tiles. The universal and consistent application of the tiles, which also includes the ceiling, alludes to an idea of cave, whilst its blackness visually magnifies and exaggerates the occupant’s naked flesh. The other bathroom, finished in reflective bronze tiles, is open to the courtyard. Here the tiles were chosen because of their sensitivity to change in natural light, allowing the “mood” of the exterior to be represented throughout the day. When one closes the door of these spaces its as if they exist independent of the utility of domestic life, allowing a moment to engage in an intimate dialogue with the new architecture. 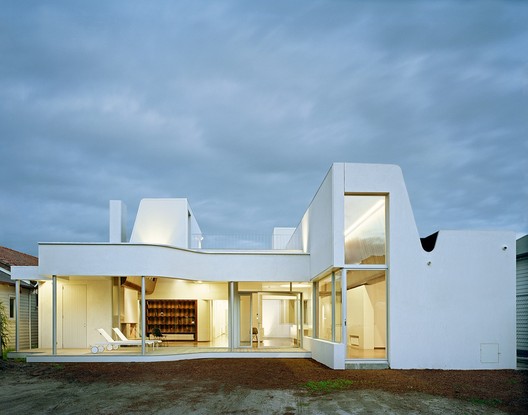