Within St. Petersburg lies a triangle shaped island that has been home to a naval prison, lumberyard, a radio station, and military barracks. Off limits to the public for 300 years New Holland Island, with its unique identity of canals and existing warehouse structures, will be part of a $12 billion dollar redevelopment project. Identifying the island as one of St. Petersburg’s most significant historical sites The Architecture Foundation held an international invitation-only competition New Ideas for New Holland, which included entires from David Chipperfield Architects, MVRDV, Russia’s Studio 44, and winning proposal from WORK Architecture Company (WORKac).

Amale Andraos and Dan Wood, principals of WORKac shared, “We are very excited at the opportunity to work with the Iris Foundation and NHD on this critically important project for one of the world’s most beautiful cities. Our master plan balances preservation with innovation, respecting St Petersburg’s past while paving the way for its continued artistic development and future.”

A few years ago we had a chance to visit WORKac at their studio in New York and spoke with principals Amale Andraos and Dan Wood (be sure to take a look at our interview with them!) More on this winning proposal by WORKac along with renderings and drawings following the break. 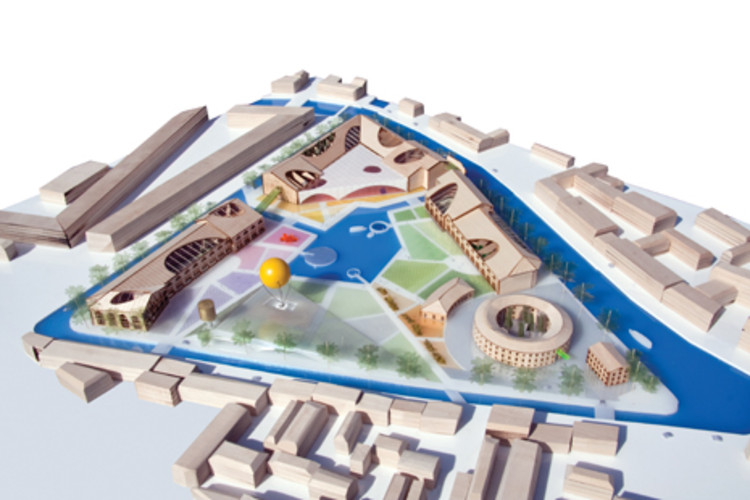 The competition invited entries from all over the world and an exhibition of proposals recently went on show at the Central Naval Museum in St Petersburg overlooking the New Holland site attracted 6,617 visitors within a two week period. Opinions left on comment cards filled out by the public at the exhibition overwhelmingly coincided with the views of the competition organisers in supporting WORKac’s vision.

New Holland is an 8-hectare island bordered by two canals and a river in the heart of St Petersburg, within 20-minutes walk of the Hermitage and the city’s other major cultural sites. The island was conceived by Peter the Great in 1719, and became Russia’s first military port in 1721. It belonged to the military since its foundation and had thus been closed to the general public for 300 years.

WORKac’s winning entry creates a public park, whose topography transforms New Holland Island into an outdoor amphitheatre and performance space. An elevated promenade brings the park to the interior of the existing structures, connecting a series of programmatic ‘voids’ – art, design, education and commercial – that builds on St Petersburg’s rich cultural history to create a new vibrant cultural hub for the city.

WORKac imagines New Holland Island as a microcosm of wider St. Petersburg: a cultural “city within the city” that sponsors a vast range of public spaces and programs, from the visual and performing arts, to new technologies, to education, to markets and a hotel. Rather than adding new architectural statements, however, they have worked primarily through subtraction to carve from the historic warehouses their amazing potential for public and cultural activity, retaining as much public outdoor space as possible.

The warehouses will be fully restored on the exterior. Within, the new voids and skylights are introduced within the repetitive brick structure to organize the programs and larger internal spaces. Outdoors, public activities, performances and exhibitions are supported around the pool once used for testing ships, and new landscaped areas.

Two new structures accommodate programs that the warehouses cannot contain. A landscape-covered “wedge” provides space for parking and shared infrastructures for the island; the sloped surface can be used for watching events and hosts a tethered balloon to view the city. Secondly, a triangular tent is proposed between two warehouse buildings to provide large-scaled exhibition space in the winter. In summertime this becomes a sculpture garden.

To ensure the cultural center remains vibrant year-round, an interior public promenade winds its way across the tops of the warehouses, linking the buildings with sky bridges. This is a new kind of public space, combining functional circulation with gardens and views down into the buildings.

WORKac will collaborate with Arup on the engineering, infrastructure design and phasing of the project. As the project moves from the concept phase to the planning phase, WORKac, together with New Holland Development and the Iris Foundation, plan to hold a series of public discussions with interested parties to ensure that the public’s input continues to be a central part of New Holland’s development.