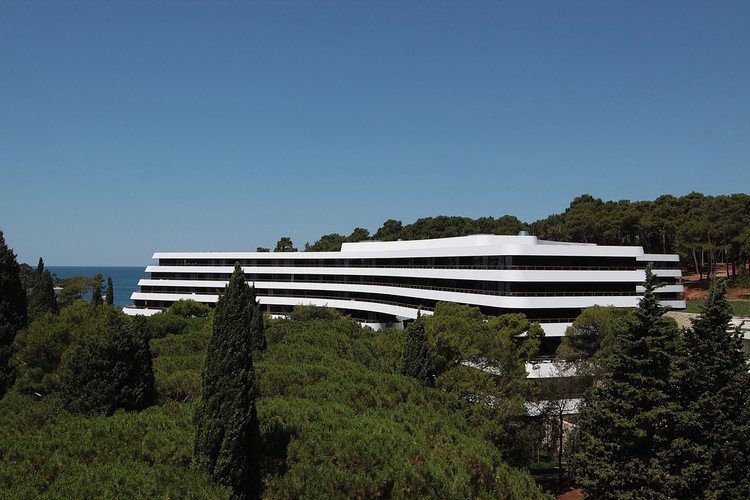 Text description provided by the architects. Created by a team of renowned Croatian creatives comprised of a new generation of architects, conceptual artists, product, fashion and graphic designers, Hotel Lone is the first design hotel in Croatia, and is situated in the Monte Mulini forest park. This park is one of Rovinj's most attractive tourist zones, located in the immediate vicinity of the legendary Eden Hotel and the new Monte Mulini hotel. The surrounding grounds and parkland is a unique and protected region of the Monte Mulini forest on the Lone Bay.

The term design hotel is meant to illustrate this as a space that nurtures the concept of an interesting and functional design. The Architects from studio 3LHD were responsible for the design and construction of the hotel building. In addition to the overall architecture, the interiors and the furniture were designed and chosen especially for the hotel in order to achieve a distinct and recognizable identity. The hotel has 236 rooms and 12 suites. 16 rooms offer an exclusive experience of a private massage pool built in the room's terrace. All the rooms are suitable for all types of guests. Rooms with king-size beds, twin beds or connected rooms are suitable for families.  The hotel has three restaurants "L", "ON" and "E", two bars, a jazz club and a mini club.

One of the main characteristics of the hotel is the state of the art high-quality conference center with 4 conference halls, several meeting rooms, and a VIP lounge fully equipped with the most advanced technology and an accompanying bar. The hotel's lowest level has a wellness center inspired by the Mediterranean. Besides a big pool there is a fitness center, massage rooms, a relaxation zone with a vitality bar, saunas and hydro massage pools.

The agency Bruketa & Žinić OM conceived and oversaw the visual identity of the hotel.   The hotel's identity is recognized through the external design of the building, with a facade that is defined by dominant horizontal lines – terrace guards designed to evoke the image of slanted boat decks. The building's floorplates contract from level to level going up, creating an elevation that is tapered at all angles.

The site's complex terrain with dramatic altitude changes determined the locations of internal facility spaces through a dynamic interweaving of public areas and guest suites at all levels. The specific Y shaped ground plan enabled the following: a rational & functional organizational scheme, quality views from all rooms, and the grouping of public facilities around a central vertical lobby.

The main lobby connects common spaces on all levels, creating a central volume of impressive height and scale with interesting views in and around where all vital functions of the hotel take place.   When designing the interior, 3LHD and the designers from Numen/For Use chose the surrounding ambiance as the hotel's signature visual element which also defined all views of the interior. With that in mind, the walls in the rooms are covered with mirrored panels, distributed in a random pattern which reflects ambient light and Mediterranean greenery, pulling them deeply into the interior, filling it with the exterior. The greenery also reflects on the glossy surfaces of ceilings in public areas, intensifying the effect of the surrounding plants.

The visually light and open space of the lobby is covered in white stone surfaces and beige-golden fabrics, the oval lines of the mezzanine guards and the furniture enhance the fluid character of the space and are in contrast with the intimate, subdued tones of the rooms and suites where the atmosphere is calmer, materials warmer (wood and carpets), the colors darker and lighting dimmer. The entire design of the hotel is based on contrasts (black, white, wood) and fabrics as the unifying element, varying from a fluid thin veil in the restaurant, through functional but dynamic wall coverings in the rooms, to the richly decorative mural in the lobby.

The key to the concept was the awareness of the necessity to avoid the sterility of most hotel facilities; that is why the designers used textiles with rich textures and quality oak veneer treated with eco-friendly lacquers, which give the visual and tactile impression of untreated massive wood. This material is usually too rustic but in this execution it manages to integrate walls and spaces into a harmonious composition through contemporary design and purified, spatially articulated shapes of paneling that overflow into furniture.   The conceptual assumptions used in the design of the hotel and its interior show evidence of a deep respect towards the achievements of hotel architecture on the Adriatic Coast from the previous century, combining it with a strong modernity expressed primarily in materials, functions and typologies and consequently in architectural forms. 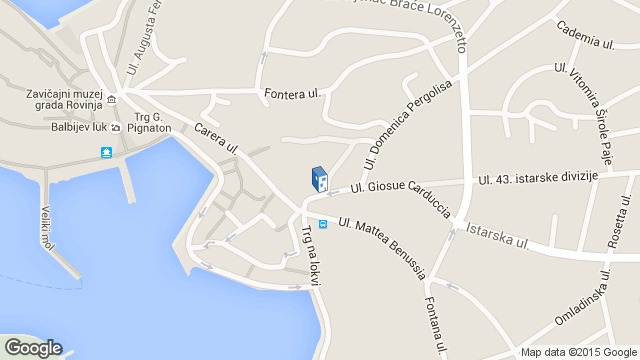