A unique concept the PAS House is imagined to be a place to both live and skateboard. The skateable surface of the home, interior to exterior, fluidly moves from the ground to the wall and then to the ceiling in a continuous surface forming a tube of a 10ft diameter. The PAS House will be constructed in Malibu, California for Pierre Andre Senizerques (PAS), a former World Champion and Pro Skater as well as Founder and Owner of Sole Technology, the design by Francois Perrin and Gil Lebon Delapointe divides the home into three separate spaces; including a living room, dining area, and kitchen, the second one includes a bedroom and bathroom and the third a skateboard practice area. 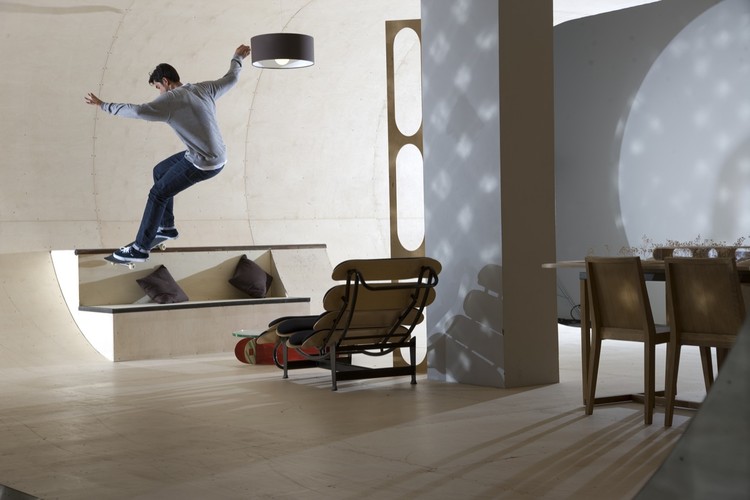 The PAS house is the first house to be entirely used for skateboarding as well as being a traditional dwelling. It is the ultimate dream for generations of skateboarders who wanted to bring their practice into their home.

In the practice of Architecture, it also represents a groundbreaking in the construction of a non Euclidian geometrical space with a continuous surface that creates a new experience of the domestic space, more fluid and dynamic and reflecting of our 21st century lifestyle.

A model of the project and a full scale prototype of the Living area was recently presented in Paris for the exhibition Public Domaine/Skateboard Culture at la Gaite Lyrique, a New museum directed by the City of Paris. For the 25th birthday celebration of Etnies, their team of pro skaters did a demo session in the prototype.

Sustainable facts: The project through design and its location on site will make the most of the natural elements (sun exposure and natural ventilation) to avoid the use of ac or heating, all the rest of energy use will come from solar and wind power. Rain water will be stored and recycled on site for landscaping. The concrete slabs will act as thermal mass and most of the materials, especially the wood, will come from a local source. The prototype in Paris was made using local french wood (pine, poplar and birch) and created minimal waste by an efficient use of the plywood panels.