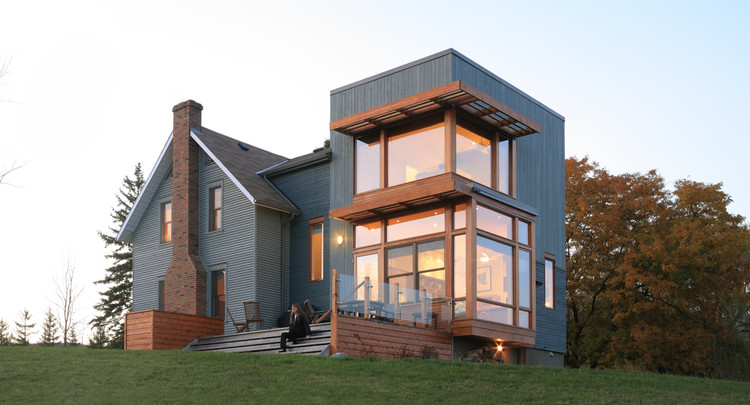 Text description provided by the architects. The Creemore Farm is a frugal renovation and 85 sqm extension to a turn of the century farmhouse north of Toronto, overlooking rolling hills and expansive views. The addition reorients the whole house toward the view, presenting tall panoramic corner windows in the sitting area at the ground floor, and the master bedroom at the second floor, both framing the vista to the Southeast.

The project proposes a total reconsideration of the house orientation, proportion and form within a tiny and efficient floor plate to create a lofty, light space that uses its relationship to the landscape to make it feel larger than it is. The new floor plate was founded on, and overhangs the foundation of the previous addition freeing it from the previous form that had ignored the view, but preserving the economy of the footprint.

With only the tiniest increase in square footage, the window heights, and orientation to the sloping into the valley, the space feels significantly more generous. The building stands tall, taking in the valley and the sky. The deck and sunshades extend the interior space to the exterior and overlook the pond below. Next to the existing historic farmhouse form, the simple tower form has a contemporary expression, yet mirrors the sense of stark simplicity of the traditional farmhouse, and the traditional barn and silo relationship.

The owner was looking to rethink the weekend house for future retirement and full time use on a frugal budget. Having lived in the house for quite a long time, she had clear criticisms of the existing functional layout and clear direction on what her expectations were for the new work. The new program for the extension comprises a vestibule, powder room, kitchen, storage and sitting area at the ground floor and is connected by a new stair to the new second floor master bedroom suite and original bedrooms.

The historic farmhouse needed a new weather envelope, and a face-lift – it had been badly clad in brick. The existing farmhouse and new addition were reconceived in a light material that instead would be lofty against the sky. A tapestry of grey/blue horizontal and vertical siding provide texture and differentiation of the contrasting building volumes, while still marrying them together as a whole. The exterior sunshades ensure the interior space is open to the landscape, but not blinding. The interior form is simple, with the changing seasonal landscape as primary decoration framed and accented with bamboo millwork and dark offcut-hardwood flooring. The clients moved into the house in Fall 2009.