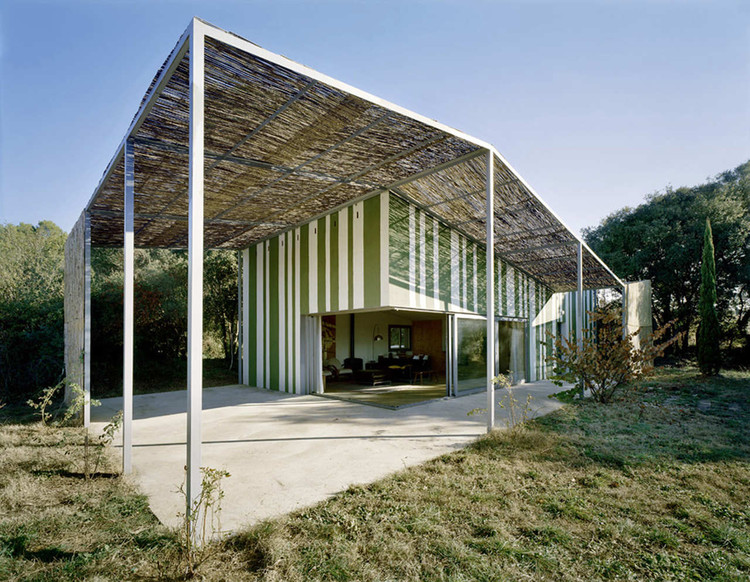 Text description provided by the architects. On a narrow, elongated site where a house already stood it was proposed to build a small studio that could be used as both a paint workshop and an occasional weekend home for the children of the owners.

The starting point for the project was given by the financial aspect, as it needed to be an economically viable project on a tiny budget estimated at seventy thousand euros. This factor limited both the structural possibilities and the finishes, which meant we had a very clear starting premise: we needed to work with the local industrial¬ists (if possible from the same village), and with technical solutions that they were accustomed to, as they were the traditionally adopted ones in the typical constructions of the area.

This premise led us to work with load bearing walls, single-direction forgings, aluminium windows of reasonable dimensions and conventional finishes such as painted render.

On this basis, the studio-dwelling, of around ninety metres square, is divided into two well-differentiated sectors: an open-plan space that gives on to the outside via a cane porch, and a more intimate space, with two bedrooms and a small bathroom. The entire programme fitted into a perimeter of load bearing walls with a height of just over six metres.

The open-plan space contains the living room, dining room and kitchen. This space has been designed to maximise its surface over the total, so that the heart of the house, the space where most of the daily functions are carried out, is as pleasant as possible. The rooms, in contrast, are understood as basic spaces, with the minimal sufficient space for sleeping and for a small desk.

The bathroom and kitchen are also reduced to essentials. The bath¬room also integrates the space for the washing machine and the hot-water boiler; and the kitchen is a minimal bar in the living room space.

The municipality regulations mandate a sloping roof, which gives rise to a play of inclinations that recall the profile of the mountains on the horizon. These inclinations are applied to both the principal construction and to the cane porch that surrounds the north-west and south-east facades, providing a formal continuity between the principal building and the porch.

Given the high levels of sunlight that strike the roof during the summer months, its inclination is taken advantage of to generate a flow of air within a ventilated chamber in the traditional roof mode found in Barcelona’s Ensanche: above the forging a second corrugated roof is raised that generates an air chamber of around thirty centimetres.

This chamber takes advantage of the inclination of the building to, through perforations in the facade, allow air to enter through the lowest part of the roof and to exit through the highest part. In this way the air chamber is heated through sunlight, rises and exits via the upper perforations, taking in more fresh air through the lower part.

The roof inclination is also used to collect rain water on its surface, which is led to the centre of the building and drained via a great gargoyle above a surface water tank. This tank is connected to the old kitchen garden, allowing it to be irrigated entirely with recovered rainwater.

The two facades of the dwelling below the porch are painted in vertical white and green stripes, allowing the shadow from the cane to produce a play of textures that change with the different solar orientations during the day. This is not just a formal resource that also helps to integrate the building into the surrounding vegetation, but also a response to the type of facade finish that the budget has imposed.

The mortar render on a ceramic brick wall cracks easily and has poor absorption of any possible facade movements, thus making it virtually impossible to prevent the appearance of fissures and cracks. When a facade of this type is painted uniformly, the cracks are the only pattern on the surface and are therefore terribly in view. The fact of superposing a highly contrasted pattern, in this case a white and green bar code, allows the cracks to fade through a question of intensity and become blurred behind the main pattern.

The vertical white and green bars therefore, besides giving the build¬ing a far more durable appearance, produce a changing play in the appearance of the facade according to how the sunlight strikes the cane porch and the shadow it throws on the building, integrating it into the forest that begins at this spot on the site while at the same time creating an allegory to the reduced price of the house.

The rest of the facades, which front the dense forest that surrounds the house, are painted in the same green colour as the strips so that, in the early morning and late afternoon the level rays of the sun project the shadows of the trees on them, creating a mimicry of the green shades of the adjacent forest.

The river cane porch that surrounds the main facades of the build¬ing is formed by a lightweight metallic structure formed by square tubes, T- and L-profiles according to position. The cane rests on and is tied with tensioned cables and flanges to a very simple installation that allows the owner to change the cane approximately every two years, as this material obviously has a limited lifespan. The very low price of this material allows it to be replaced without causing financial difficulties.

The singular point of the dwelling is an opening in the living room situated on a corner, with a system of lacquered aluminium sliding doors that do not leave a vertical riser when open, giving the sensa¬tion, when inside the building, that the building projects into the porch and the outdoor garden.

To achieve this empty corner, the load bearing wall structure is interrupted at this point by an IPN on the corner resting on the wall above the opening. In order to reduce the overhang of this metallic structure, a circular metallic pillar is added that coincides with the breakup of the frame and that, being the same colour, almost disap¬pears to give the sensation that the corner is floating.

This is a very simple operation that allows the box of the building to breathe and open up at one of its corners, providing splendid vistas over the village of Gaüses and the mountains on the horizon. 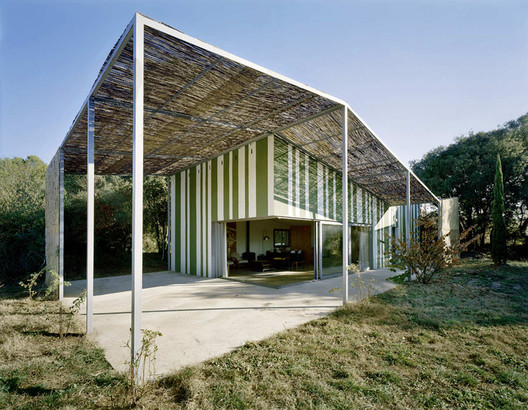