Save
House in Possanco / ARX Portugal 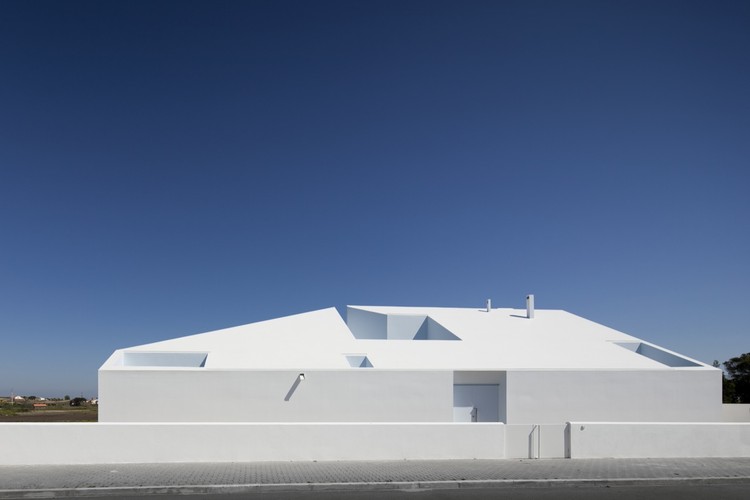 Text description provided by the architects. The cultural meeting point joining the house owners and the architects was based on their common interest: an undoubtedly contemporary architecture, but one whose nature and final expression would also be the outcome of a research of the paradigms figuring in the traditional architecture of the region, the Alentejo.

The implantation terrain of this small house, located in the village of Possanco, sets the transition area between the new urban strip and the protected agriculture zone.

An extensive northbound plain ends far away at the splendid Arrabida mountain ridge. Sparse water spots of the river Sado spreading, and the Atlantic Ocean defining the horizon complete this scenario of a bold pictorial expression.

The owners wanted a small vacation house that allowed a casual and relaxed enjoyment of their weekend when escaping the urban everyday stress.

Our minds were for so long populated by images of the so-called popular architecture, produced before the technological era. They are small houses with sometimes asymmetric roofs, with one of the two garrets longer, almost disproportionate, reinforcing the compact aspect of volumes very much committed to the land where they are built.

These long roofs make the houses cosy during the extremely hot summers and yet sober in the winter. The presence of these houses on the Alentejo plains, allied to the whiteness of their lime painting bringing out an almost abstract figure, compose portraits of a singular and surprising beauty.

The first relevant constraint is the triangular shape of the small lot which, when applying the legal distance measures, almost does not allow any formal alternatives.

Conceiving the house had still to face a paradox: the most interesting views stand to the north and not south, where the windows should be placed in their quest for light. At south there is the street, traffic and passers-by whose look inside the house owners wanted to avoid.

These two aspects ended up being the key-features of the project and the solution would end being the introduction of yet another paradigm in traditional architecture: the patio

The volume is determined in blueprint by the regulated distances. In profile, the maximum height permitted is reached by the back wall (2 floors) and the front wall, facing the street, stays with the minimum height possible (1 floor). To the passer-by, the result is a house of deformed perspective, in axonometric projection.

In order to receive natural light to the south, we introduced in that long plan 4 patios: a central one, one in the living-room, one in the social toillets and a final one near the children's room.

Almost all situated north, the windows guide the views to the amazing landscape. We explored the expressiveness of the white block and its abstract personality.

The totality of the volume would be white, roofs included, where the patios resemble bluish excavations, enhancing delicately the strong character of the house. In fact, the building is done almost exclusively with the Alentejo repertoire: white matter, light-shade, thickness/mass, texture.

Indoors, rooms occur in between "suggestions" of the traditional two-garret volume, and variations in scale and depth transform in each chamber the atmosphere of that inner world intentionally sober. In the middle of the living-room, the kitchen-island takes on the ancient role of the fire as a centre-piece of the home, around which everything comes to place.