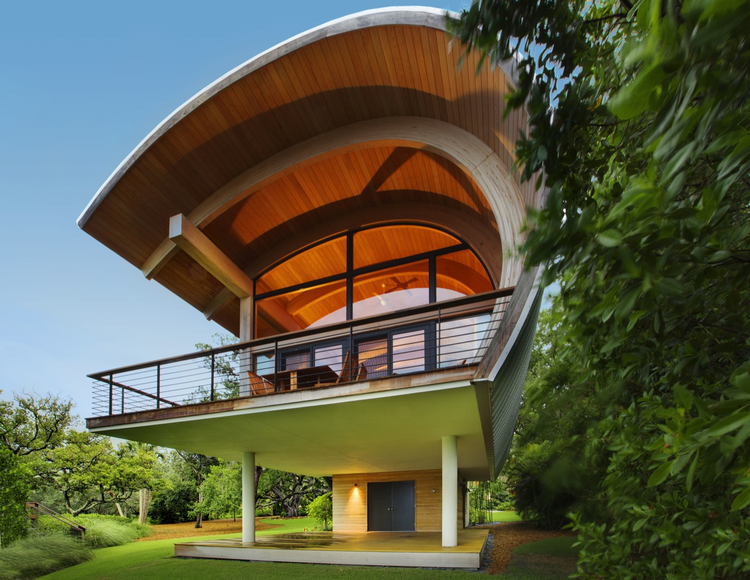 Text description provided by the architects. The guest residence, located on a barrier island, is set within a mature oak hammock along Sarasota Bay. The wooden structure was inspired by two elements.

First, the Owner’s one sentence program which read, “…respect the land, and the rest will follow”. Secondly, the live oak trees which were shaped by the coastal winds from the west, influenced the structural form of the guest house.

The Owner requested a “house in the trees.” A small program: one bedroom, bath, living area with kitchenette, and a loft, is organized to provide privacy between a neighboring property to the north, while offering broad views of the oak hammock, and Intercoastal Waterway.

Glulam beams were selected for their ability to enfold the structure around the space.

The laminated pine beams, which curve over the entire space, blur the distinction between wall and roof. The result is an open structure to the east and west, yet solid and private to the north.

The ground floor includes a small storage room for kayaks, and a covered Ipe deck. The loft interior, defined primarily by the curved beams, alludes to the aquatic bay environment, and wooden boat hull construction. Ship lap cypress siding is used to clad the exterior walls and interior curved wall.

To preserve the health of the oak hammock, the house is supported on a specialized steel piling foundation system designed to avoid root disturbance and minimize sub grade impacts to the oaks. As a result, all existing trees were preserved.

The design is intended to evoke an organic architecture that is influenced by, and reflective of its site. 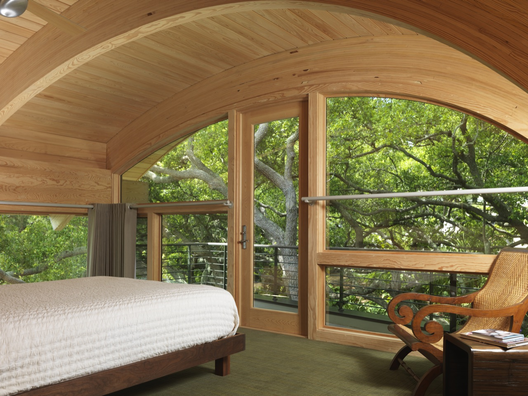