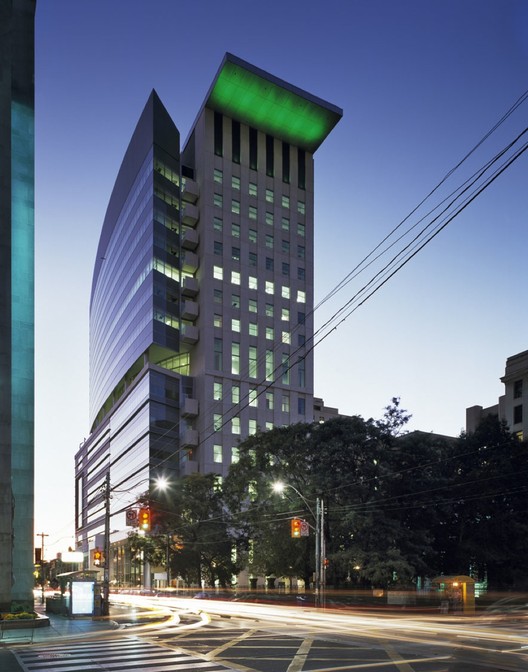 Text description provided by the architects. One Eighty Queen West is a commercial property located on a site at the northwest edge of downtown Toronto’s financial district area and adjacent to the city’s “legal district” to the east (Osgoode Hall, the Ontario Courts Building, Old and New City Halls). The site also stands immediately adjacent to a historic legal monument: Campbell House, originally the home of William Campbell, first chief justice of Ontario and at the threshold to the Queen Street West retail strip and the residential neighbourhoods to the north. The land is part of the Canada Life lands. Along with an environmental agenda, the project design was driven in the first instance by its obligation to address this confluence of distinct urban conditions.

The development team for the project was responsible for the Canada Life Lands initiative of the 1990s and managed the first phase of its implementation at 180A Simcoe Street. This latter structure was the first step in the fulfillment of a long term development masterplan authored by Urban Strategies, intended to create an ensemble of mid-scale buildings and major public open spaces surrounding and celebrating the historic Canada Life building at 330 University Avenue, a Toronto landmark. The One Eighty Queen West site was initially a minor part of the masterplan strategy and had been zoned in anticipation of a low to mid scale hotel / commercial project. However, because of its size and ready availability, this site became pivotal to the developer’s desire to retain their 330 University Avenue tenant, the Federal Court, while accommodating this important occupant’s need to find a new home in which they could grow over the next 20 years.

The design combines a seven-storey podium base with an eight storey tower above. A double height floor at the tower base sets back from the upper floors on the south and west sides creating a break that mitigates the impact of the upper mass at street level. The design of the building at 77.5 meters in height, incorporates an arcaded set back at grade along the east side of the building, and responds to a Bylaw requirement for a through-block interior passage at mid-block.

Each façade has been designed to provide a unique expression specifically related to its adjacent context. The east façade facing University Avenue has been detailed to suggest stone-faced pilasters alternating with punched windows emulating the scale, vertical expression, and rhythms of the historic Canada Life building at 330 University Avenue. This facade is capped by a projecting cornice that will be illuminated in the evening by a coloured lighting system programmed to respond to the landmark weather-indicating Canada Life beacon. Small retail shops occupy the west portion of the Queen Street frontage, extending the existing scale and rhythm of Queen Street storefronts to the west. A larger retail space at the northeast corner of the building creates a leasable space with access to the arcade on Simcoe Street for outdoor seating. The lobbies are enclosed with floor to ceiling glazing at street level. Canopies along the Queen and Simcoe Street frontages extend the weather protection offered by the arcade.

Canopies at grade extend the ceiling planes of the public lobbies outside the building. A series of sun-shading projections on the south side of the building reduce cooling loads while providing a strong play of light and shade to enrich the façade. Balconies at the east and west elevations mediate between differing façade treatments on the building.

An important motivation that drove the choice of enclosure systems was the desire to reflect core values of the Canadian justice system and the Federal Courts as the intended anchor tenant. The positive concept of transparency in the judicial system was reflected in the choice of clear glass for all glazing systems. At the same time the permanence and durability of the judicial system are reflected in the robust solidity of the precast concrete cladding and the traditional forms of the punched windows. The obvious conflict between clear glazing and energy goals was addressed by the use of screen printed ceramic frit shading patterns on glazing units, a feature that creates a signature feature of the building’s appearance.

Kuwabara Payne McKenna Blumberg Architects was also responsible for the first tenant fit-up project within the building. The Federal Judicial Center occupies the lower 7 stories of the building and was constructed to meet the new LEED Commercial Interior (CI) standards. Further fit-up work on the eighth through eleventh floors for Public Works and Government Services Canada should commence design in the near future and is also slated to meet the LEED CI design criteria. This project provides many precedents for green design in high-rise development and tenant fit-up. 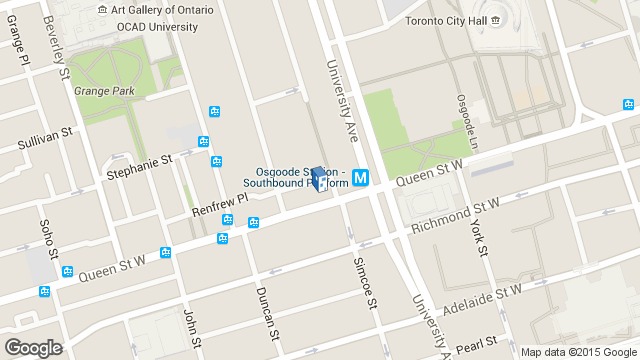 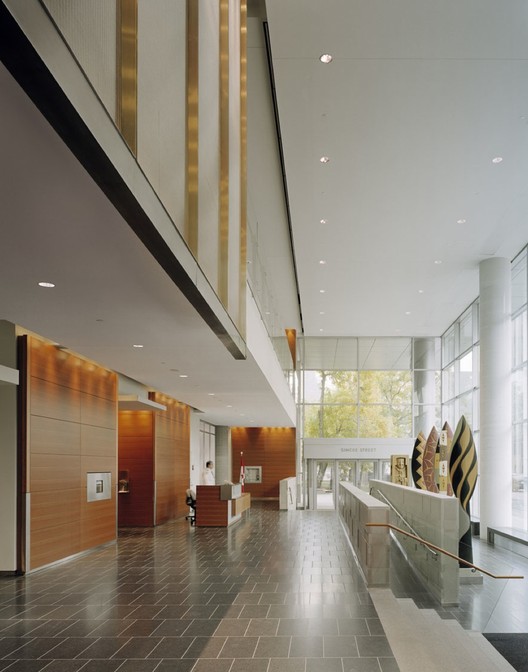