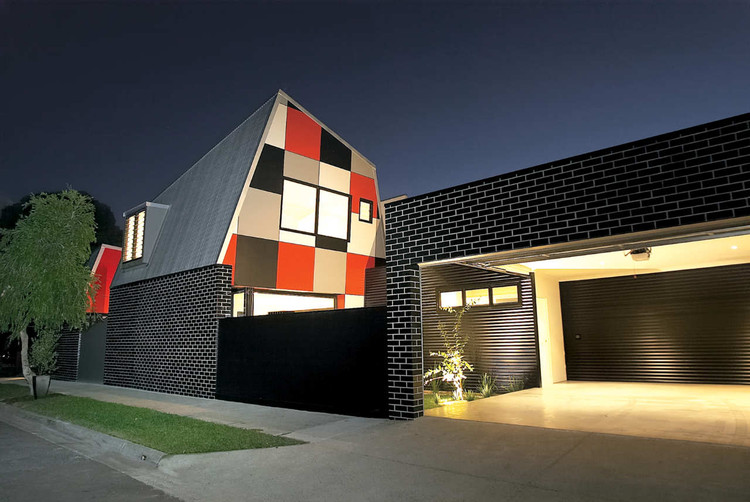 Text description provided by the architects. The subject site is nestled on a corner in the back streets of Brunswick that enjoys a northern orientation which we chose to exploit.

This house is a critique and a response to the suburban housing vernacular and the planning laws that influence them. An endeavour to provide an alternative affordable housing to conventional European influenced copies of copies that proliferate throughout our sub-urban landscape. An area much discussed and debated in the last decade within our profession.

The aim of the project was not to re-engage and profess our manifesto on architectural and cultural regionalist issues and ideas; but mealy to demonstrate alternatives and possibilities using cost effective and generic standardised building methodologies. In this case, brick veneer, painted compressed sheet, Colorbond roofing and cladding, plasterboard etc. A make do with what you’ve have approach were critical architectural ideas are the platform for the design process. This project was an ongoing case study within our office and we seek to eliminate the idea that architectural ideas can only be achieved with big budgets and costly construction methods.

Our response is an endeavour to establish an alternative architecture; another language for the average home! Another rhetoric critical of the arrangement and order of space, material, colour, scale, environmentally sustainability and urban engagement. The outcome seeks to raise questions rather than to dictate answers about the generic Australian House.

This is a big house on a small block. Yet it is very small in comparison to an average family house.

Although the site is just over 200m2, it consists of all the programs found in a conventional sub-urban housing on a ¼ acre block; 3 bed rooms, 2 ensuites and a bath room, a study, 2 separate living zones, a court yard, a double garage and a ‘back yard’.

The plan is both open and closed, solid and void. The design intent was to compartmentalise the space with the flexibility of joining independent space such as the living with the court yard the dining with the back yard or as one big open continuos space.

The design response was informed by the formal manipulation of a traditional ‘hipped roof’; stretched from the first to ground floor on 1 continues plane thereby relinquishing 2 separate building elements and roof lines for each level. The intervention also enabled the building to engage with the prominent corner highlighting the converging perspective to the entry and floating down pipe, or water feature and resulting in a multi-dimensional reading of the building at pedestrian level.

The result, an ambiguity between scale and the demarcation between the ground and first floor. Where does the ground floor end and the first floor begin?

The peeled back pop-up skylight sheds some light on the spatial conundrum.

Bigness competes with the compressing warped roof to negotiate access from ground to first floor.

The house explores the physical and spatial constraints of suburban building as a discourse rather than a limitation with the roof being the predominate element sculptured by the mandatory ‘set back diagram’ dictated by local planning policies. A set back diagram literarily constructed, translated into the roof form. Our practice adopts the philosophy that constraints in what ever form they may be manifested; budgets, planning policies, contextual are part of the design process and can be used as part of the discourse and we seek for the critical architectural ideas as resolutions.

The space is as much about section as it is about plan as the two compete, whilst form dictates function. The northern orientation enabled us to integrate environmental sustainability through passive design and utilized the sloping roof as a method cross ventilating through the sky light and bi fold doors.

The house incorporates important classical ideas as architectonic techniques instead of replicating the aesthetic by empathizing the point of entry with the converging roof ad fence lines. A double heighten entry, a dramatic staircase highlight the entry foyer.