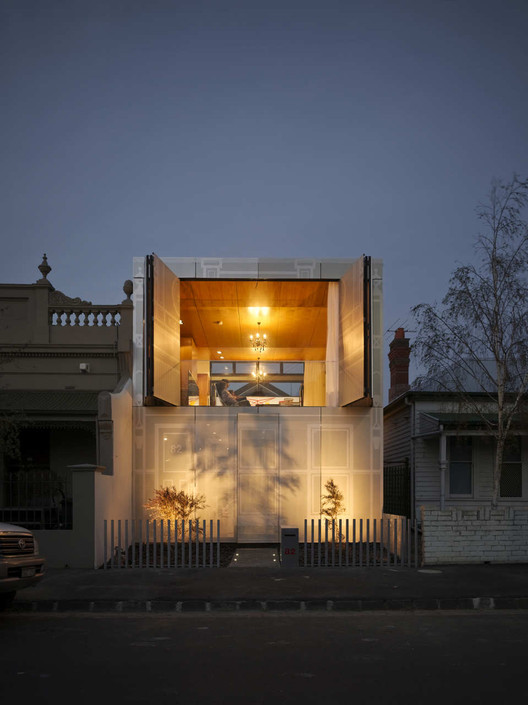 Text description provided by the architects. This project to us is a platform to establish a critical dialogue within our built environment; to raise questions as much as it is to finding solutions. The project is a critique on our cultural attitudes and how we determine them. A critique on what we consider to be of heritage significance and how to narrate such ideas in a critical and contemporary manner.

We challenge the idea that small inner city blocks cannot respond to complex contextual constraints such as orientation, sustainability, innovative urban infill planning controls and heritage restrictions. Instead of negotiating with these so called 'constraints', we utilized them as areas of possibility and exploration for our design processes and discourse.

This once vacant site is nestled at the eastern bookend between a row of single fronted Victorian terraces and a double fronted Edwardian weatherboard house. Our strategy was to critique and respond to our ongoing research into the terrace typology. We concluded that this demand and attraction for such a housing model has a stronger link with romanticized nostalgia rather than of good design with the emphasis residing on the symbolism of the ornamental facade, which dictates “the neighbourhood character” instead of responding to it.

Our strategy was to break down the elements of the terrace house, and to critique and respond. Respond to the terrace house’s inability to address solar orientation, the poor linear program that is constantly remodelled with predictable repetitive and limited planning to achieve some sort of link between the active habitable space and the external private open space and the lack of natural light and ventilation into the house.

The main areas of investigation were Symbolism and Ornamentation, the Public and Private realm and redefining its boundaries, Solar Orientation, environmental sustainability and the programming of the plan.

The built form is essentially an urban infill within a very small 5.5x14.4m envelope. The perforated house is our response to establish an alternative language to the accepted notion of our cultural attitude towards critical questions of identity and heritage.

We were interested in retaining the ‘idea’ and the ‘symbolism’ of the terrace but elevating the gesture to an ironic or even satirical level to engage in a public debate. The irony is manifested through the idea that it’s only through the absence of matter, that through perforation; the idea of the symbol of the terrace house is manifested rather than a physical reproduction of terrace house.