This project is one piece of the Los Angeles Police Department’s (LAPD) new headquarters facility, originally awarded through a competition to a team that included the LA office of DMJM/Design (now part of AECOM), Denver-based Roth+Sheppard, Studio 0.10, and John Friedman Alice Kimm Architects (JFAK). 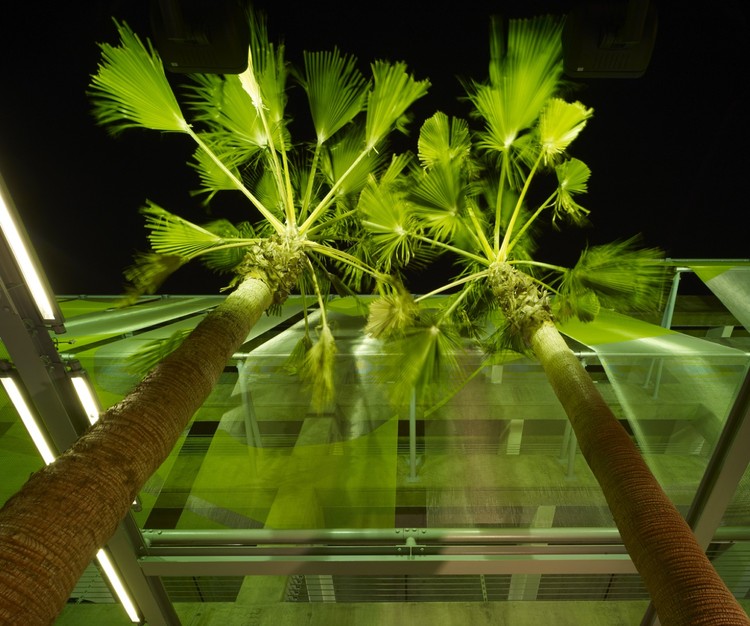 JFAK’s portion of the project was the Motor Transport Division and Main Street Parking Structure. Located in the Historic Core of Downtown Los Angeles, just down the street from the new headquarters building and two blocks from City Hall, this 300,000 square foot, 5-story concrete structure integrates three components that typically stand on their own: an 800-car parking structure for the LAPD’s employees; a mechanics’ garage, car wash, and refueling station for the LAPD’s top brass; and a culturally-oriented retail component along Main Street.

In order to minimize its impact on the developing neighborhood, the mechanics’ garage is located at the rear of the site, a half level below the street, where it cannot be seen or heard. The main volume of the structure is set back from the sidewalk in order to preserve views of St. Vibiana’s Cathedral, which until recently was the home of the Archdiocese and now serves as a cultural center. Slated to be an art gallery, the one-story retail component sits immediately on the sidewalk in order to activate life along the street.

Holding all these elements together is an undulating, vertically-banded, stainless steel mesh screen which stretches across the full width of the 300-foot long structure. Serving as an ever-changing veil for the structure, it performs on a number of levels. Painted in a pattern of leaf-like forms, it creates a dynamic, joyful image that suggests the “greening” of Los Angeles, while also acknowledging the district’s reputation as one of the most active centers of art galleries in the City. The metal mesh also provides a high level of security for the LAPD employees in a manner that allows the structure to be naturally ventilated. Lit up at night, it creates a warm, friendly glow for the neighborhood.