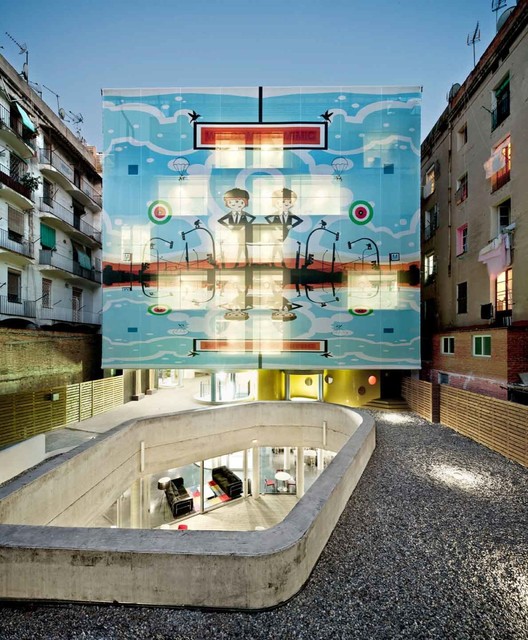 Text description provided by the architects. The decision was taken to preserve a historic facade, despite the fact that it is not officially protected, and to insert the building between it and the party wall of the adjacent building. The new building treats the rooms as if they were shelves, using wells of the highly compact old district to afford a dramatic ambience to the common spaces, which are located below street level. The relationship of the neat and static facade, which yields a programme of conventional rooms with the other facades in the area, is imbued with a certain complexity and change. It uses a huge wrap that reflects the changing light of day on the facade of the new building.

These decisions are all about space, but they are also about integration. Being very sombre and direct, we would have to say that the facade is conserved as a memory of the building that once stood there, but also as a tool for negotiating with the regulations and securing permission, yes sir right away yes sir, making it possible to recess the building on the ground floor, form a porch and open up an inner patio inside the utterly dense maze of streets in the area. Working thus with the legislation will render it possible to locate rooms on the ground floor, in turn solving the conditions of privacy with peculiar clustering systems, with light entering radically and split-level floors.

The aim of the huge wrap covering the facade is for the building’s appearance to change during the day both from inside the rooms and from the street, while lighting conditions also vary on the inside and on the outside. It is a commitment to integration with the variety of the surrounding buildings. The sobriety and seriation called for by economy of resources applied in the construction of this building is granted a degree of variety by this huge wrap, which will change with the seasons and will filter the natural light of day differently to the artificial night-time light.

Asking the user, the new hotel has two different miens depending on whether you are in the room or in any one of the common areas. The public areas in the building, below street level, are treated heterogeneously to generate cosy corners and different ambiences. A variety of forms, colors and furniture is offered, as an extension of the street-level dynamism that is not actually within sight. And on the contrary, the rooms are imbued with sobriety to make for easy adaptation to the tourist's decisions. From the inside of the room a direct visual relationship is established with the street through the shower area, located on the facade, and the huge wrap which, with the help of vinyl, protects it from the eyes of the street.

The hotel, albeit a place of rest for the tourist, seeks to remain ultraurban, peppering the inside with a dose of the outside, with objects and combinations in the public areas and views of the street from the rooms, hence the building is akin to a door onto the street and, in turn, onto the hidden, private and heterogeneous parts of a historic district. 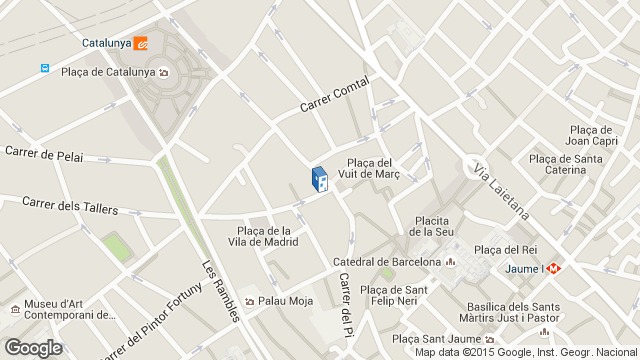