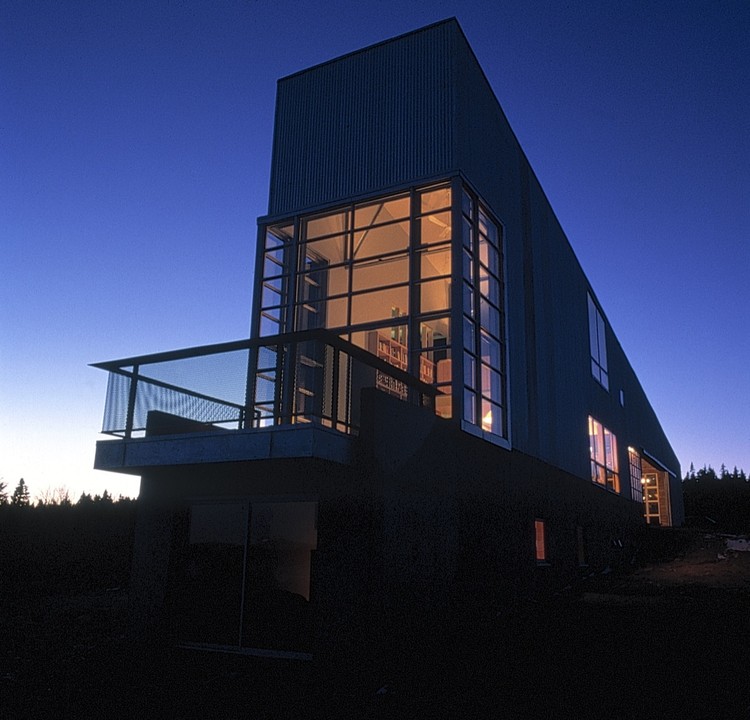 Text description provided by the architects. The modest house is a 12 foot wide, 110 foot long wall playing a didactic role within both the natural and cultural landscapes. It sits on a four acre field surrounded by the sea on three sides: east to a domesticated fishing cove, west to the nearby wild, open ocean, and south to the immediate shore of a bay. Its ‘rough-and-ready’ wrapper is in keeping with the dog-patch-like cultural landscape context.

The exterior skin is standard, industrial, corrugated galvalume. The top-of-concrete line of the foundation is raised, expressing the relatively high cost of getting out of the ground in cold climates and forming a horizontal datum against the opposing slopes of land and roof. A heavy, concrete stair bump is a protective gesture against the prevailing westerly winds coming off of the sea.

The monolithic, monopitch roof climbs to the south and the water covering one continuous, unobstructed living space progressing from garage, to entry court, to kitchen, living and cantilevered deck. This tube is punctuated by totemic elements which inflect it and provide comfort and place-making (bridge, well, hearth, truss, south window). The spatial reading of the concrete foundation makes a wainscoting sill in the main living area.

Three bedrooms occupy the lower level, while a master bedroom/study occupies a second floor loft. De-laminated walls and ceiling expose conventional platform framing. The house exploits a passive environmental approach to heating and ventilation. It is an essay on the relationship between form and lifestyle which clearly demonstrates that a 12’ wide wall in the landscape can provide the spatial and functional requirements of modern living.

The result is a tough rather than sentimental architecture. Its minimalism has less to do with Mies van der Rohe, and more to do with the zeroness found in the pragmatism of the vernacular. Like the vernacular, it is contemporary by its use of the ordinary building conventions of its time and place.