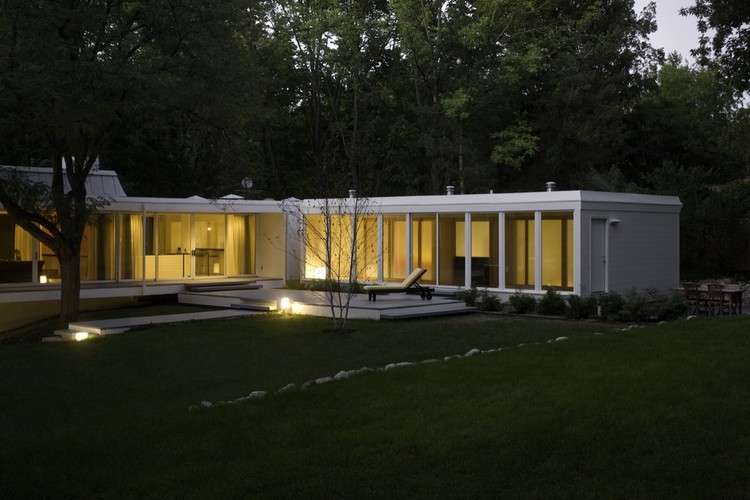 Text description provided by the architects. This project involved the addition to a 1960’s era international Style house, an anomaly in this typical suburban Columbus neighborhood. The existing house, a long white box that sits atop a steep, heavily wooded slope, consists of a first floor and a walk-out basement. The addition includes two kid’s bedrooms and two baths on the first level and an entertainment room on the lower level.

The addition creates a subtle and seamless continuity with the still contemporary original architecture, adding a right-angle wing to the east end of the house and framing the rear yard and main entry. The new landscaping included terraced lawns and a long, rubble retaining wall, emphasizing this framing. The new rooms are organized along a single-loaded, fully-glazed corridor that connects and aligns with the house’s existing circulation and terminates at a rectilinear outdoor patio just beyond the new structure.

A full bath located between the two bedrooms features a black mosaic tile floor that continues over the shower half-wall and across the corridor floor. A polycarbonate panel at the shower wall provides borrowed light from the corridor and provides continuity between the two sets of large-scale, wood-framed polycarbonate sliding panels at the bedrooms. These panels allow the two bedrooms to open fully to the corridor, gaining both light and floor area. A half-bath located at the near end of the addition and echoes the minimalist and monochromatic character found elsewhere.