Save
The house of Clay and Oak / Dow Jones Architects 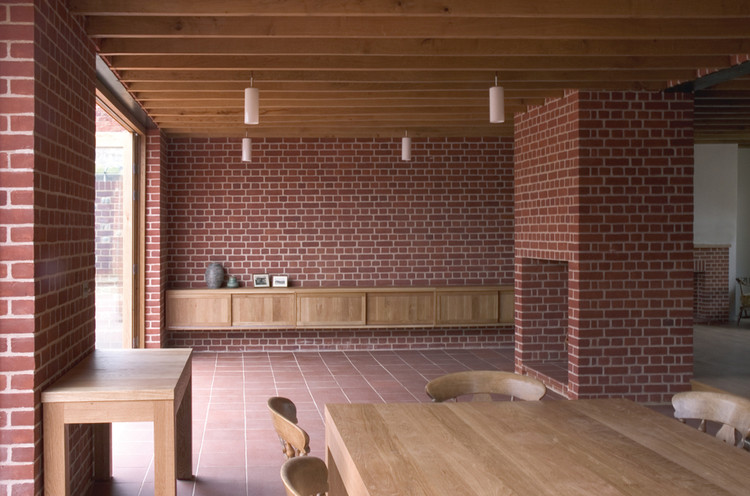 Text description provided by the architects. British practice Dow Jones Architects sent us this house renovation with a good use of brick.

More images and drawings after the break.

Poplar Cottage is a small house on The Green in Walberswick built in the early 1920s. Over the past eighty years a number of piecemeal extensions had resulted in a peculiar internal organisation that cut the house off from its garden. Our brief was to demolish it and to make a new house, but initial conversation with both the planners and Parish Council suggested that there would be much opposition to this. The decision was taken to retain and renovate the front façade and end gables of the existing house, and to build a new house into this carapace. In this way we attained planning permission for the project as an extension.

The house sits on a large plot that faces onto The Green and extends to the west as a large garden. The garden is structured as a series of rooms ‘enfilade', with an existing axial pathway that runs to the back of the house. The new house was conceived of as the completion of this sequence of external rooms and the culmination of the route through the garden.

The house is focussed around a large hearth that sits at the heart of the plan. The hearth faces the garden and is located at the junction of the new and the old. The hearth is located to the side of the axial route through the garden, which is completed by the staircase. The stair is situated under a rooflight that drops light into the heart of the house, and is in turn organised so that on climbing the stair you are presented with a view over The Green and to the sea beyond that completes your journey through the garden.

The ground floor to the garden side of the hearth is occupied by a large kitchen, dining living room, that is joined to outside by two large folding sliding screens. These open the façade entirely and allow the clay floor tiles to run seamlessly from inside to out, blurring the distinction between the house and garden, and enforcing the idea that this room is the completion of the garden.

The house is entered from a courtyard space to the south, which is made up of an existing Suffolk flint walled out-building, a high garden wall and a new games room which is made entirely of black corrugated metal sheeting. On entering the house you find yourself in a hall space, which reveals a diagonal view through the living room, past the hearth into the garden.

There is a very strong idea about construction in play in this house. The new building work is made entirely out of clay and oak. The ground, both internally and externally, is made of a red clay slab. The new perimeter walls and hearth are local brick, flush jointed with natural lime mortar. The flush jointing gives the wall the appearance of being a plane of material, and draws attention to the natural lime mortar, which has been mixed with small grit fragments that glisten in the sun and lend the walls an incredible softness.

The floor and roof structures are made of large green oak joists, overboarded with oak planks. All of the internal walls are panelled with vertical oak boarding. The oak boarded stair descends to the ground floor where it sits on a section of raised oak floor that forms ‘the snug' - a north east facing room with a fireplace that overlooks the green at ground floor level. This section of floor sits on top of the oak ground and establishes a relationship with the stair and adjoining oak clad cloak room that emphasises the fact that the oak joinery in very much an ‘inclusion' both on the clay ground, and within the existing carapace of the house.

On reaching the top of the stair you find yourself in the ‘withdrawing room' a large room off which all of the bedrooms are organised. This room is rooflight and has widows that face both south and east, and from here you can see the sea. The room is set up as a room for listening to music and writing at the desk that cantilevers off the wall. There are three bedrooms each with a private bathroom. 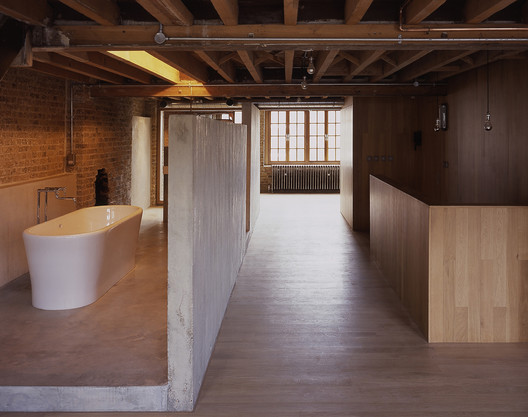