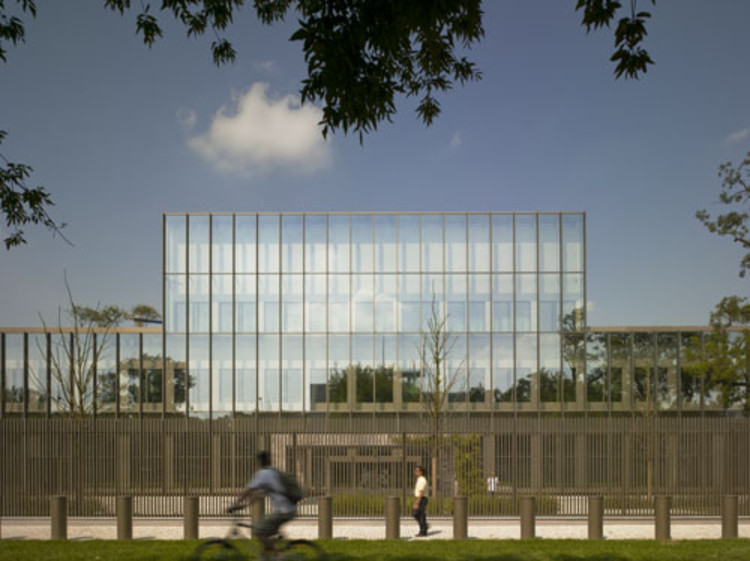 Text description provided by the architects. Set in its own grounds facing onto Ulica Kawalerii on one side and a park on the other in an area of the city devoted to embassies, the British Embassy in Warsaw has a serene and formal quality. Its long form is centralized by an attic in an elementally neo-classical way and underlined by the longer figures of the walls and railings enclosing the site. The building is explicit in its conservation of energy; its glass elevations function as the outer skin of a double façade, which provides substantial thermal insulation in winter and relieves heat in the summer. The outer layer, delineated by pale bronze aluminum mullions and mirror glass, reflects the sky and trees of the surrounding gardens. Behind this is a more substantial façade of windows set between solid piers and spandrels in a modulated composition of a similar palette. The pale polychromy of this arrangement is a distant relative of the painted stucco buildings of the school of Schinkel, which can be seen across Europe from the Hague to Oslo and here in Warsaw.

One enters the Embassy grounds through a Gate House on Ul. Kawalerii. A carriageway leads to a stone clad porte cochère at the centre of the façade. The ground floor is reserved for public activities and features a large space for exhibition and events, and a café that opens onto the garden. Occupying the remainder of the ground floor is the area for Consular Section and UK Border Agency complete with a public waiting area accessed via its own entrance from a route through the grounds. The administrative offices of the Embassy are located on the first and second floor. With an acoustically absorbent ceiling, carpeted floor and double façade, the offices are places of calm efficiency. Workspaces are amply lit with daylight from the glass facades and two generous planted courtyards in the centre of the plan. In the attic at the second floor is the Ambassador’s suite, which looks out on either side to extensive roof terraces.

A variety of material finishes are used in the interior. Structural columns are expressed and the windows set between them have mullions and spandrels in light bronze anodised aluminum. The floors are terrazzo or carpeted. The foyer coat cupboard and café screen are made of walnut panels.

Each floor has its own identity through the association between its parts and their relations to the outside world. Public spaces in the ground floor flow from one to another and into the grounds. Open office space in the first floor is given a degree of separation by the interior courts. In the comparatively small Ambassador’s suite the offices will have the scale and quality of cabinets, a theme that continues in the small spaces for sitting that are cut out from the wide areas of planting filling the roof terraces on either side. In its larger form the roof planting relates the terraces to the grounds around the Embassy and the park beyond. With these simple gestures, the Embassy maintains its role in the culture and fabric of Warsaw.

The building has been designed with safety and security as a priority. Mace’s integrated design and construction team, led by Tony Fretton Architects, worked closely with structural engineering company Buro Happold, specialist advisors David Goode Associates and façade specialists Saelzer to develop a façade that can withstand the impact of an explosive device.

In addition to strengthening the building’s security the double façade has significant environmental credentials. It acts as an environmental barrier to the harsh Polish winters and warm summers. The glazed outer skin on the South, West and East facades is positioned one meter beyond the inner skin to create a cavity. Mechanical louvres at the top and bottom of the cavity are closed in winter to retain the heat, while in summer they can be opened to cool the building. The heating and cooling system inside the building has variable flow and adjusts in accordance with fluctuating temperatures outside. These combined solutions significantly reduce the building’s energy consumption. Another sustainable design feature is the carbon dioxide driven ventilation, which has been applied to the exhibition area. This system adjusts the mechanical ventilation levels in accordance to room traffic and has been applied to the exhibition space where occupancy levels will fluctuate. All heating needs for the building are generated from a connection to Warsaw’s district heating system, negating the need for a boiler. 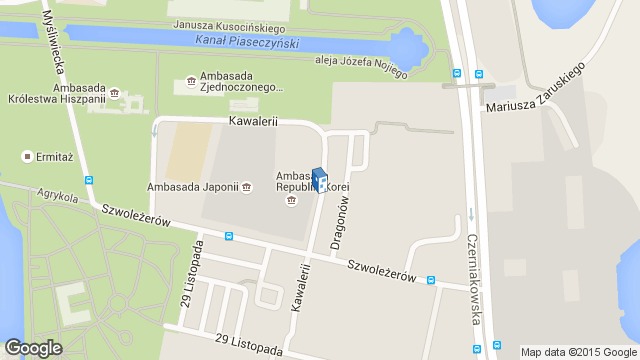 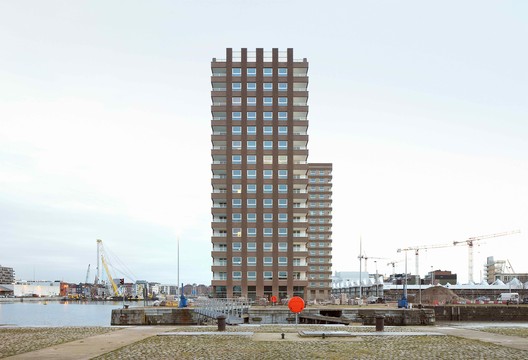 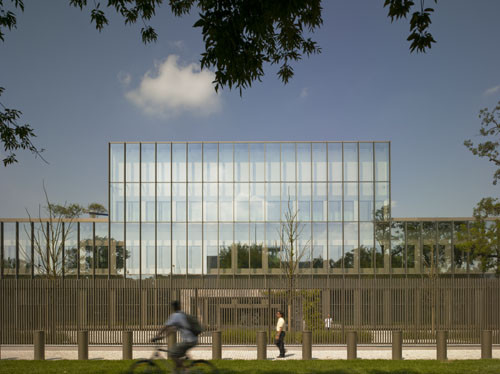