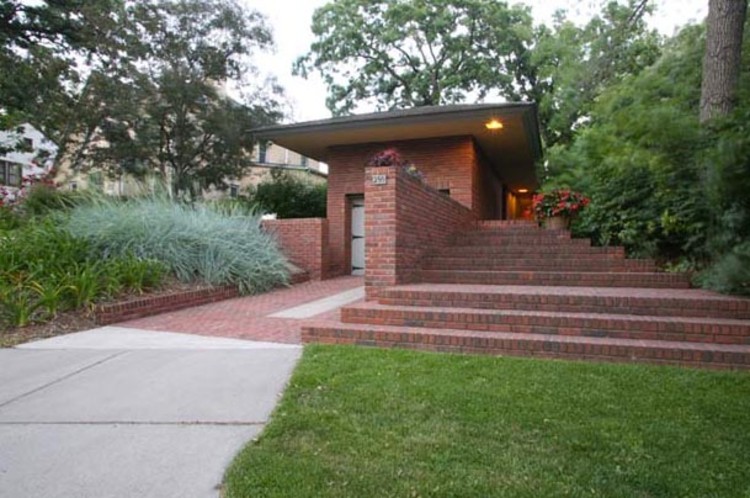 Completed in 1934, the Willey House by Frank Lloyd Wright is often described as the fusion of his two greater known styles, the Prairie School and the Usonian style. From it's exterior it possess many of the same visual qualities of his older designs, but also other implications of his newer and developing style. More on Frank Lloyd Wright's Willey House after the break.

Malcom Willey and his wife Nancy had plans to build a new house, and were initially considering building a "catalog house." While they began to learn more about this type of housing, Malcom brought home a copy of the book "An Autobiography" from the University of Minnesota, which impressed Nancy so much that she felt she had to have Frank Lloyd Wright as her own architect.

They sent him a letter asking if he would be willing to provide them a "creation of art" for a budget around $8000, but thinking that he would not be interested in a small commission they also asked for the name of a more local architect that he would recommend. Surprised by his answer, the Willey's were thrilled to hear that Wright would partake in their new residential design.

His first design added up to be too costly, so a bit of revision and rethinking led to the second design, a modest 1,200 square feet and costing around $10,000. It is primarily built of red brick and cypress wood, with the overall intention of maintaining visual connections between all of the central spaces. To do this, the living room and dining room were unified in a single space, while the kitchen was separated from them by a small group of shelves. This allowed for Mrs. Willey to keep an eye on the rest of the house while working in the kitchen. A hallway lined with bookshelves leads to the study, a small bedroom, bath and the master bedroom.

The surroundings of the house are just as beautiful as the interior, with the floor length glass doors of the living room's south wall allowing views out into the natural environment. In the shape of an acute triangle, a brick terrace lines the walls of the house. Above it rests a trellis which eases the transition from inside out. Wright's design was a new concept, an important step away from the compartmentalizing of the house based on functions.

The style of the Willey House is often considered a bridge between Wright's Prairie School style houses and his later Usonian houses.

In 1963 the Willey's sold the home to a different family, who would later sell the home to a Wright aficionado that only occasionally occupied the home.

The residence was eventually sold to the current owners, and upon their purchase they realized that the house was in major need of restoration. Currently it is only visible from the public roads, as it remains private.