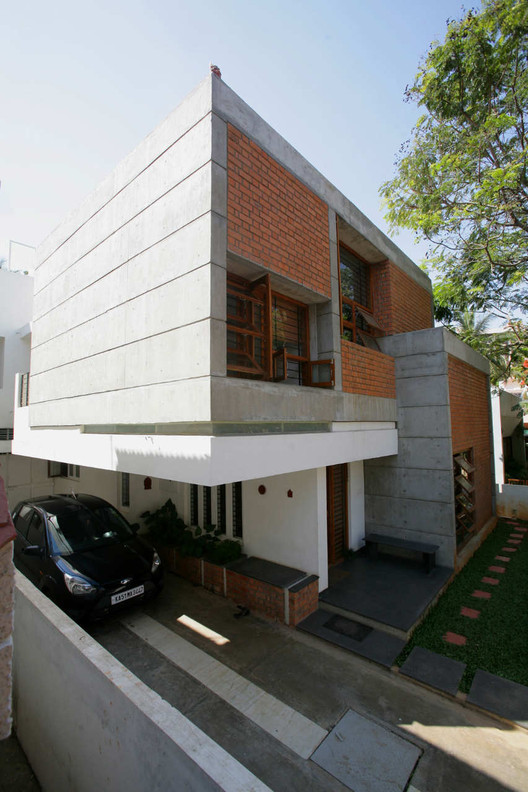 Text description provided by the architects. The existing structure was a 30 year old typical Bangalore house with thick load bearing walls. Most of the outer walls were very close to the plot boundary cutting out a large amount of light. The neighbor’s house too was hugging the boundary wall in certain areas which cut off even more light.

The requirement was to de-clutter the existing house and add more spaces, to meet the needs of the family. Our challenge was to rid the house of its dark, dingy corners and simultaneously make it ‘vastu compliant’. We decided that instead competing with the vastu prerequisite, it would be more productive to convert it to an asset.

The main vastu changes involved moving the staircase to the north. Instead of demolishing and remaking the entire stair, we decided only to demolish the first flight of the stair and subtract the built form above it. Moving the first flight of the stair created an interesting opportunity. The freed-up space could have been added to the existing living room. Instead, it was added to the setback outside to create a little “pocket of sunshine” for the house. This completely changed the nature of the entire ground floor bringing in plenty of natural light. It also gave the family a small outdoor space, which acted like an extension of the living room and was cut off from the busy street. The new flight of stair is perpendicular to the existing stair and is attached to the front of the house like an appendage.

Just like most houses built here in the 80’s, this house had a huge projection above the car park, the top of which was not accessible. We decided to convert this space into a study. However the slab could not take the load of a wall so we hung the outer skin from the roof.

The new areas are distinctly distinguished from the old in terms of material, viz. concrete and brick. The additional volumes in brick and concrete latch on to the existing structure which is conceived as a white monolith. All existing doors and windows were reused and the new windows, although different in language attempt to echo certain aspects of the old windows 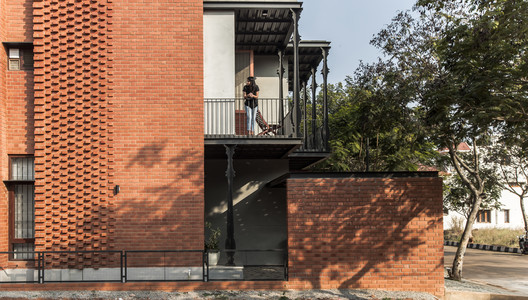