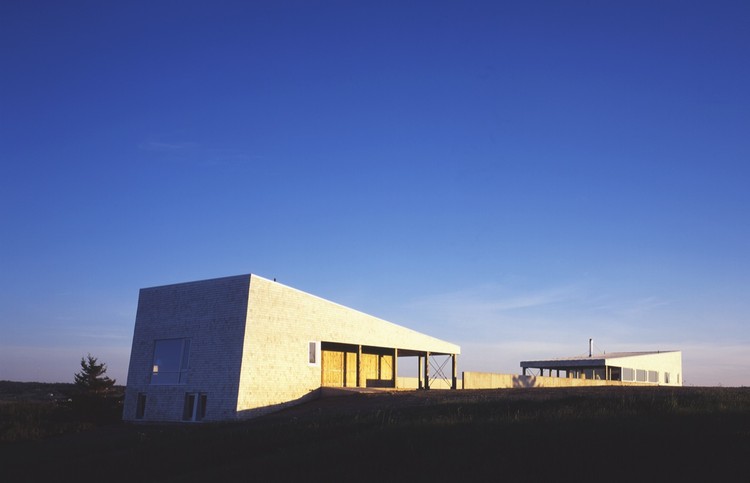 Text description provided by the architects. The Hill House is the first of several projects we will be featuring from MacKay-Lyons Sweetapple Architects.  The firm has established an international reputation for design excellence garnering 75 awards including 5 governor General's Medals and the American Institute of Architects Honor Award.  They are also well known for the Ghost Architectural Laboratory, an education initiative designed to promote the transfer of architectural knowledge through direct experience.

The Hill House is situated alongside the Nova Scotia's south shore. The design embraces a long tradition of light timber framing and taut skinned building envelopes, which result in an architecture that is ironically both massive and delicate.

At first glance Hill House appears to be audaciously sited atop a glacial hill (drumlin) along Nova Scotia’s south shore. However, it’s hilltop courtyard strangely responds to the traditional pattern of hilltop farms found throughout Lunenburg county; where a microclimate is formed by the simple pin wheeling siting of house and barn. As a result the house ‘cultivates’ rather than consumes the landscape. It merges with the hill with respectful confidence. The setting integrates both natural and cultural landscape geometries. The house is aligned on the north south axis of the 250 year old agrarian pattern, while the diagonal path through the courtyard follows the long north-west axis of the drumlin left by the glacier 15,000 years ago. The hilltop siting underlines and resolves the desire for ‘prospect’ with the need for ‘refuge’. While the house acts as a 360° panopticon, its courtyard and battered haunches offer protection in a harsh Canadian climate. This house, for a landscape photographer, is often described as acamera a didactic instrument which explains the landscape.

The program for this 3,000 sqf, 3 bedroom house consists of the main house (with studio), a barn (with guest quarters), and a courtyard garden between. Two low millwork and concrete walls uncoil from the two structures to embrace the courtyard axis. House and barn pinwheel with each other along a central courtyard axis. Social space and barn face inward to the courtyard through covered porches, while private spaces are stacked at the outer ends of the project. ‘Served’ and ‘servant’ functions are clearly articulated.

This is a project which aspires for absolute conceptual clarity within minimum means.

Hill house expresses the material culture traditions of the Maritimes. It exhibits a kind of minimalism which is born out of a Spartan cultural ethic that eschews ostentation, and out of a response to a severe, labile climate. This ‘cultural sustainability’ is reinforced by hydronic in floor heating, the use of local, renewable materials andcraftsmanship, resulting in an accessible and affordable architecture. 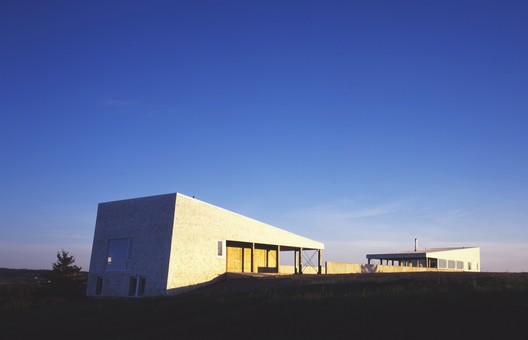