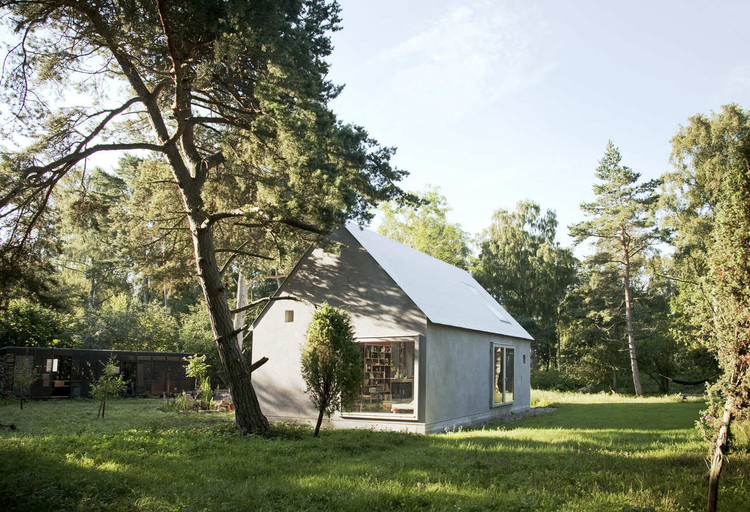 Text description provided by the architects. The brief came out of the very limited budget: a house as simple as possible. Equally simple as the barn we wanted to convert to a summer dwelling, but which never showed up on the market: one open space with a large number of possible beds, cooking in the middle, washing facilities outside the house. Planing regulations ruled the placement of the house to the inner part of the plot which at the time of designing was still densly vegetated and scarcely accesible. Hence the house was designed with generic qualities, creating no front- or backside, treating all sides of the site equally. Four large openings 2,4x2m are placed according to rotational symmetry, one in each facade. Facing north is a fixed window, the other three are glazed doors. There is no hierarchy between the doors – anyone can be used as an entrance. Two roof windows add skylight to the interior.

Due to lack of timber in history, wooden construction which is favored elsewhere in Sweden, is not as dominant on the island of Gotland. Instead the local building tradition has resulted in simple plastered stone houses with few details.

For that reason the house was given a traditional building volume with plastered walls and with a 45degrees gable roof without gutters. The walls are built out of lightweight conctrete masonary blocks and the roof is cladded with corrugated Aluzink steel sheets, preferably used on farm buildings in the region. Measurements of the building volume and openings are chosen to fit the size of the masonary blocks so the waste of material could be minimized.

There is a surviving tradition of small-scale window manufacturing on Gotland which made it possible to try the unconventional sollution of windows mounted outside the walls which allowes them to open up 180degrees. With the windowframe flush to the nichewalls and the floor the opening appears from the inside as a clean undetailed hole in the wall. Opening up, the doors are held in place along the facade by a simple spring steel fitting.

Four 40cmx40cm ventilation openings with wirenetting and internal plywood shutters allow air-circulation diagonaly through the house. In winter they are simply completed with a sheet of insulation.

The roof has a simple construction with rafters supported by a longitudinal gluelam ridge beam. Due to the span the beam is supported by a steel column which was left unfinished and rusty. The inside of the roof is cladded with the same steel sheets as on the outside. All this together with the plastered inner walls gives the interior a quality of ”outside but inside”. Parts of the inner roof, around the sky lights, are cladded with plywood. The cladding covers the window frames and the roof windows appear as holes towards the sky.

The interior space is dominated by two plywood volumes which, in and above, offer space to play and to sleep. Around and between these volumes entrance, cooking, dining and living takes place. All serving functions are organized along a 90cm wide strip running through the house. All technical equipment and all water and drainage is located along this strip which limited the complexity of installation work. Spacial functions like stairs, storage, closets, bookshelf etc. are also located along the serving strip. In the middle there is the kitchen which consists of a 3,1mx0,9m concrete bench with an integrated fire-place. It is cast in situ and the cupboards are remaining parts of the cast. In this case the formwork plywood has been used for its actual purpose.

The furniture is to a large extent assembled out of remaining our reused building material.

The becoming of this house was made possible by compensating low budget with long construction time. Parts of the construction work was executed by friends and unskilled builders. Several sollutions had to be rethought on site out of this perspective. Last but not least it all was made possible by a uniquely skilled builder with a passion for architectural detailing.