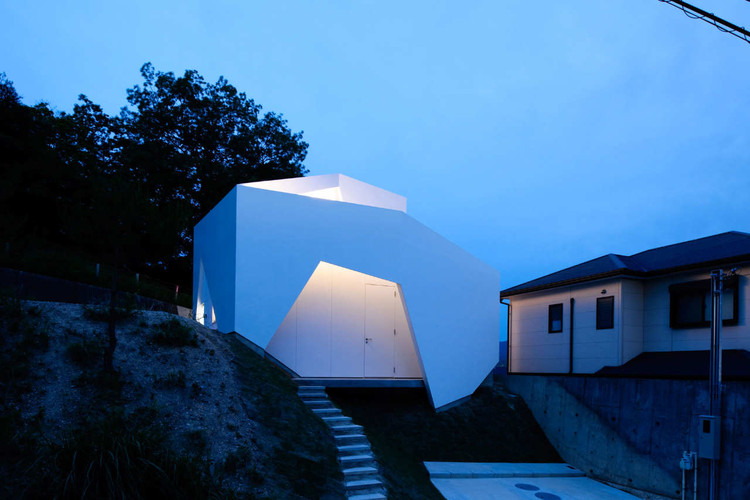 Text description provided by the architects. Outline of design

It is a small house for two small children and a young couple. The blank and coming in succession were invented by making the best use of the vertical interval in the small hill, making "Enclosure" as the life scene place in the average of a dynamic flow that connected the earth to the sky, and dressing "Wear" the outside. This creates an inside, outside new relation and sense of distance, reinforces the subject soft "Enclosure" structurally by "Wear", assumes the strengthened plan, and has both the role to ease the thermal environment in the environment.

The row of houses that queues up on the opposite side of the earthenware mortar geographical features where Seto river was placed it is possible to command the town in the strait from the site where commanding to which it goes up on a steep slope in Seto city is good to the south and it can command a view of mountains in the interior in addition, and the main three axis lines of direction of the direction of Nagoya, the direction of the strait, and Nagakute can be recognized. A dynamic landscape that became like a huge gingival trough and the prefecture having woods where it is edging removed have a peculiar ecosystem for the potter's clay mining for pottery that is called behind Grand Canyon in the strait. The road from the closest station is winding, geographical features where ups and downs are intense is characterized, and the retaining wall of a big weight type to adjust it with the vertical interval characterizes the landscape of this ground. It was thought that it wanted to make a plane a plan so that the element of these landscapes memorized in the body was reflected in the space of construction, and it tied them more directly.

Individuality that makes the best use of piece

I walked with client and town, searched for land, surrounding town was collected, the planning was decided by the process of thinking about the family's life together, and the cooperation of labor work with the client was proceeded. It thought about the cooperation arranging the private room on the first floor, and the living space that held the view concurrently was distributed to the second floor. It composed piling up the box of each life, and considering each glance while thinking about the opening. And, the design was advanced in the process of wrapping it in the person summary with "Wore". The ideal way to which the piece or more helped by esteeming the individuality of each life, and bringing it together by another individuality was requested. The second floor becomes openhearted at a dash, and actually feels the existence of "Wear" while the first floor is a set of the box when entering an internal space. The scenery seen from the window can be intentionally experienced as turned over.

The box of life fused and the fundamental form of living "Enclosure" composed by the wall, the window, the floor, and the roof was passed, and the part and the blank where the film came in succession by wrapping "Wear" from the outside were able to be done, and a little middle area was caused. This is thought to be separate the film that applies the agreement with town as the container of life. It compared it by the material feeling by using general painting in "Enclosure" and using elasticity FRP for "Wore" though it was a similar color as for two films.

This buildings are two wooden stories. It aimed at individuality as the whole and the acquisition of strength by treating wooden by bundling, that is, "Enclosure" and "Wear" two this time, and treating the relation between them. The spreading wooden frame that consists of basic vertical and the horizontal brace is adopted, and "Enclosure" part has been passed by a minimum structure. On the other hand, "Wear" part becomes because it composes of the diagonal material the streak or exist, and strengthens "Enclosure" that becomes a life scene. It did not govern in the same respect to dare to clarify that each part joint part was different, and it was assumed the held settlement from the outside partially. 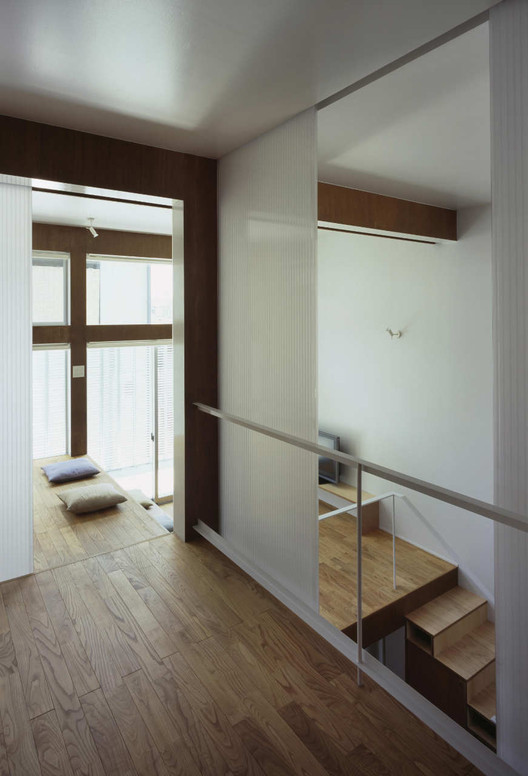