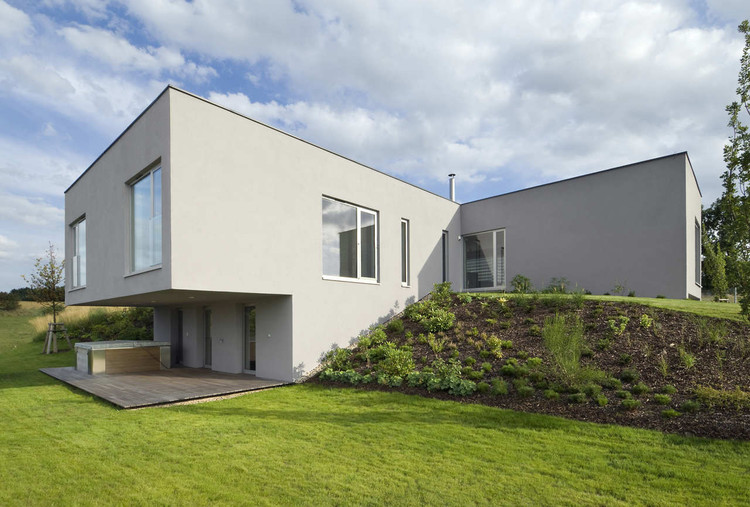 Text description provided by the architects. The basic idea of the design of the Villa is based on the layout of its internal rooms and on the work with the interior as a kind of "residential countryside". The internal rooms and the immediate surroundings of the Villa form a "spatial zone" which runs through the Villa and its surroundings as a continuous line. The Villa is partly sung in the slope of a hill to form a large and flat entrance area in front of the house. This area is the first "external" room of the Villa. It is here where the visual contact with the Villa actually begins. The space that begins in this place runs, with various modifications, through the whole house. Behind the entrance area, the "zone" enters the internal space of the Villa. The zone consists of two inside floors. From the entrance hall which is on the lower level, the "interconnected space" leads to the residential floor in the upper level via an open staircase and ends before the dining and living rooms.

The terrain just next to the sunk entrance area has been landscaped so that it follows the slope of the hill. Visually, the Villa looks lower than it actually is. The landscaped terrain creates a feeling that the main entrance is on the underground floor. For that reason, the entrance hall, despite its spaciousness, makes a rather confined impression. The main residential rooms of the Villa are upstairs. Individual residential rooms are indicated by walled partitions which do not reach up to the ceiling or to the side walls. The glazed wall of the residential hall looks out on the garden to the south and is not visible from the entrance.

That is the reason why even the overall dimensions of the interior are not evident at first sight. The architect's ambition was to incorporate a certain shock effect into the layout design. The shock effect is based on the character of the internal rooms. When visitors enter the Villa for the first time, they have a feeling that they are entering a confined underground structure. Nevertheless, after they go through the house and continue upstairs to the first floor, they get to a large room connected by a continuous glazed wall with the garden. If they look through the wall, they have a nice view of the other side of the valley.

The layout of the Villa resembles the letter "T". Having many sections, the Villa cannot be seen as a whole from any place in the garden. Visually, the villa seems to be much smaller than it actually is. The overall composition of the villa also includes a double garage standing individually near the property entrance and forming a foreground of the mass composition. 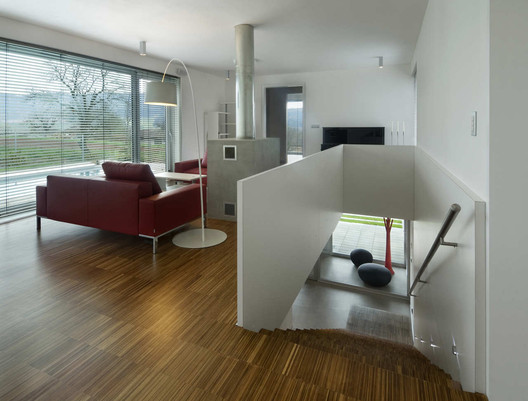