Save
Toronto Central Waterfront / West 8 and DTAH
Share
Or
Copy 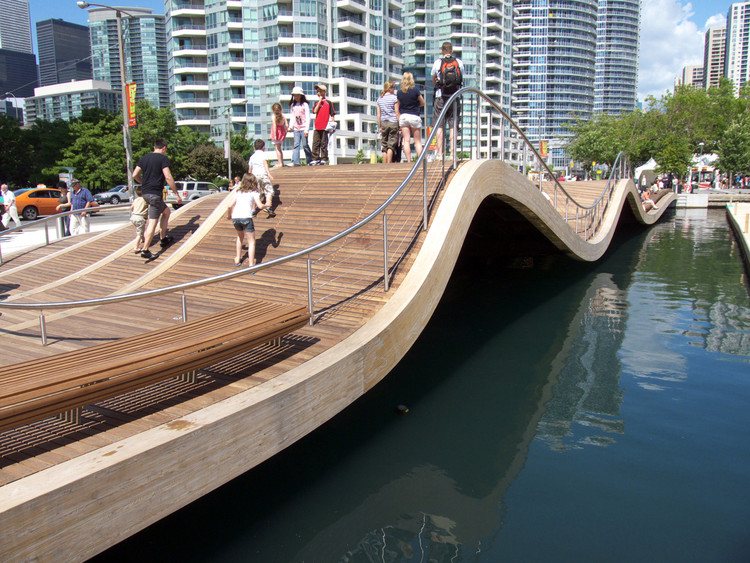 The Central Waterfront, 3.5 km of Lake Ontario shoreline immediately adjacent to the downtown business district, is one of Toronto’s most valuable assets. Yet, despite decades of planning and patchwork development projects, there is no coherent vision for linking the pieces into a greater whole – visually or physically. In this context, the fundamental objective of the project is to address this deficiency by creating a consistent and legible image for the Central Waterfront, in both architectural and functional terms.

In response to an innovative design competition launched by Waterfront Toronto, West 8 submitted a comprehensive vision for the Central Waterfront that produced a powerful design language with the strength and simplicity to overcome the existing visual noise and create a sense of interconnectedness and identity. Connectivity between the vitality of the city and the lake and a continuous, publicly accessible waterfront are the plan’s priorities. The plan expresses a vision for the Central Waterfront that brings a sustainable, ecologically productive “green foot” to the rich culture of the metropolis. It suggests a new coherence and continuity along the waterfront produced by four seemingly simple gestures that create a new “Multiple Waterfront”: the Primary Waterfront – a continuous water’s edge promenade with a series of pedestrian bridges, the Secondary Waterfront – a recalibrated Queens Quay Boulevard with a new urban promenade and public spaces at the heads-of-slips, the Floating Waterfront – a series of floating elements that offer new boat moorings and public spaces in relation to the lake, and the Cultures of the City – connections from Toronto’s diverse neighborhoods towards the waterfront.

Having been awarded the commission, further elaboration of this vision seeks to develop these elements, as well as the activities that can and should be sustained in the public realm. Articulating the point of contact between the city and the water and providing continuous public access are key priorities. The proposal creates a waterfront that is public, diverse and expressed through a multiplicity of experiences. West 8 has completed the strategic master plan for the Central Waterfront and is currently engaged in design and implementation of various components of the plan, including the reconstruction of Queens Quay Boulevard to create a new balance between automobiles, public transportation, pedestrians and cyclists, the implementation of the first parts of streetscape for the new East Bayfront development and the construction of wavedeck public spaces at the heads of slips.

With a desire for early action, the client, Waterfront Toronto gave West 8 the mandate to explore the potential of the design proposition for Queens Quay Boulevard in an interim project during the summer of 2006. This temporary landscape intervention was constructed to allow the public to experience the benefits of the new proposal – a prelude to the first-phase implementation of the masterplan to follow. The 10-day event also offered a chance for the design team to test practical aspects of the closure of the south side of the street and explore the feasibility of the street reconfiguration. For 10 days, traffic was replaced with bicycle lanes and a kilometer-long stretch of 12,000 red geraniums and a picnic lawn the length of almost ten football fields. A four-storey sculptural arch built with over 600 bicycles highlighted the temporary new section of the bike trail.

Spadina, Simcoe and Rees wavedecks are the first in a series of timber structures that explore variations of a simple articulation in the change in level between Queens Quay Boulevard and Lake Ontario along the Toronto Central Waterfront. Responding to the current pinch-points where the streetscape meets the water’s edge, a new public space gateway is created where the city kisses the lake, inspired by the sinuous contours of the shoreline of the Canadian lakefront.

The geometry of the wavedeck is carefully conceived using playful curves that are constantly changing to create ledges for seating and new routes to access the water’s edge. It allows for different vantage points and ultimately different experiences with both the lake and the city.

In order to establish a coherent aesthetic for the public realm along the waterfront, the simple undulating timber wave gesture became a prototype that will be repeated at seven heads of slips with subtle variation. Using a consistent palette of materials and details, the identity of each wave structure will be derived from the unique curvatures of the structure as well as the activities suggested through its form.

The planning and design of the Queens Quay redevelopment has been a long process including two extensive EA (Environmental Assessment) processes. The adopted option includes the reduction of four lanes of traffic (two each way) into a single dual carriage way (one lane each direction) to the north side of the right of way. The centrally located existing streetcar track will be reconstructed and extended over the full length of the street. The southern side of the street will be transformed into a tree lined recreational zone consisting of a pedestrian zone (promenade) and bicycle track, providing a missing link of the the Martin Goodman Trail (MGT) which follows the lake Ontario shoreline.

The East Bayfront precinct is the promise of Toronto’s great neighbourhoods on the Lake. No other district along the Central Waterfront has the unique position of being able to seamlessly relate itself to both the lakefront and the vibrant districts of the City of Toronto. As such, East Bayfront represents the opportunity to establishing a positive and meaningful relationship with the city and its lakefront. The water’s edge public realm is the primary component in defining this relationship.

East Bayfront’s water’s edge will establish the overall design language of the future public realm, including the details and pallette of materials. With 800 linear meters of water’s edge, the public realm of the primary waterfront is currently created, offering Torontonians and visitors alike a clear, vibrant public desitination with a variety of experiences and amenities along its length.

The water’s edge route in East Bayfront is composed of two principle parts: a 10m wide granite mosaic promenade along the existing quay wall that is planted with a double-row of Maple trees, and a slightly lowered 10m wooden boardwalk. These two parts work together to ensure that a generous dimension befitting the metropolitan scale of the city and its lakefront is established. Underneath the boardwalk along the dockwall a series of storage tanks that will collect and filter stormwater from the district.

The Parliament WaveDeck uses simple yet surprising forms to allow unique programming possibilities and interactions with both the lake, ecology, and the urban streetscape. The design of the Parliament Wavedeck serves two important purposes: It provides an integrated, functional part of the stormwater management system as well as a unique public space. It combines innovative geometry, careful use of materials and detailing, unique lighting effects, and integrates an exciting water treatment and aquatic habitat component within its scope. The Parliament WaveDeck introduces a form of public space new for the city of Toronto which promotes new interactions with people and the organic timber landscape — making more space for pedestrians and building the character and identity of the Central Waterfront public realm.