Hydrogen House is a series of house prototypes and suburban planning strategies for the Hilltop neighborhood in Denver, Colorado. Advocating a shift from a corporate fuel economy to a grassroots one, the project uses hydrogen fuel cells to link the design of domestic environments to ambitions for suburban development. Follow the break for more drawings of Hydrogen House. 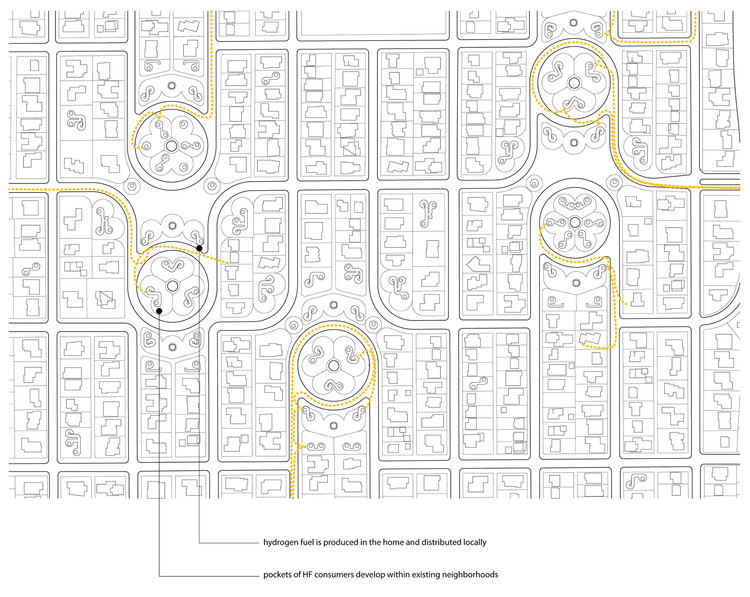 Because hydrogen fuel can be manufactured in the home and used to power both houses and cars, it is a viable and politically intriguing alternative to oil. The ability to make and sell fuel on site enables the suburban home to entrepreneurially participate in an emerging energy economy (10 major car manufacturers have hydrogen fuel cell cars in production). HF does not require the heavy, multinational infrastructure needed to produce and distribute gasoline—it can be made in small quantities by individuals and small collectives. It provokes a move from corporate to local, from centralized to dispersed.

The average size of the suburban home has doubled since 1960 and the area dedicated to storage has increased from an average of 11% to 19%. As storage becomes more central, it is also becoming more diverse and specific. Thick exterior walls store a variety of materials— including food, clothes, appliances, mechanical systems, books, and water—conditioning adjacent living areas and leaving the plan open. The sprawling houses receive natural light through skylights and glass lined courtyards. The plan’s curvilinear geometry reduces the need for partitions by shortening sight lines and creating hidden interior pockets. That same geometry at the exterior matches the turning radii of cars, allowing them to pull into hydrogen fuel stations located beneath the courtyards.

Clusters of houses share landscape features such as hydrogen fuel stations, large lawns, and swimming pools to various degrees. In some cases these features are individually owned, in others they are fully shared, and there are a number of hybrids in between. Unlike modernist suburban proposals, which tended to be large and universally consistent in style and organization, these collectives opportunistically develop in small pockets throughout the city. Recognizing that suburbia is at its best when it is heterogeneous, they introduce aesthetic variety to existing neighborhoods while simultaneously expanding the available catalog of house types (courtyard, semi-courtyard, multiple houses per lot, detached from street…). By integrating new house forms and types with an alternative economic model for fuel production, the project identifies potential benefits of an urban strategy of diffusion.

This project was part of Envelop{e}s, an exhibition at the Pratt Gallery in Manhattan, curated by Christopher Hight.