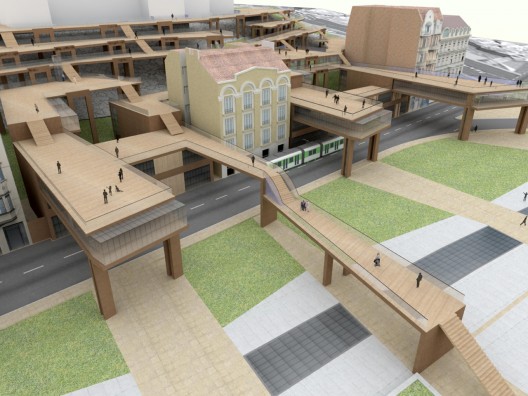 Z&Z Design Studio has submitted their proposal, Belgrade Terraces, an exploration of using people as the physical attraction to an architectural space. Additional images, a video and a description from the architects after the break.

The city consists of people, Belgrade consists of people and this is the strongest Belgrade tourist secret weapon. The guiding idea was the vision of this area full of people who walk around, relax, socialize in the multitude on terraces and platforms that are constantly descend from Kosančićev wreath to the Tourist port at Sava river.

Walk, relaxation, culture and custom of coffee drinking and socializing with the constant for Belgradians has long been domesticated, it’s simply a part of Belgrade’s culture of life, and we are just all these wonderful people came together on a new / old space, which in combination with many foreign tourists come inevitable mixing of positive energy.

In our environment (Serbia) in general, unfortunately its not given any importance of first impression. People all over the world write books about phenomenon of first impression they discuss about it, but with us is unfortunately the case that the tourist port lots of foreigners who cruise on the Danube and attracts passing in our capital is in a really unappealing, unrepresentative and devastated the area. Imagine an elderly Norwegian, English or American as it comes by boat with his wife the first time in Belgrade, and he finds an atmosphere of utterly new environment as portrayed in the conceptual design solutions. Imagine such a first impression.

DESCRIPTION OF THE FUTURE PROJECTED LOCATION

Project Belgrade terraces is an entirely new approach to regulation public space in our city. Restore people’s spaces is the main message of this project, and therefore this space got a brand new function and converted to provide in every way.

The whole move of Branko’s Bridge to the Concrete promenade hall would be combined with the new widened tourist port (which would citizens have access to) a bicycle path, of course, green areas, but also a glass floor below which would be dug existing circular rail of the first metro line M1 Kalemegdan – Lower City – Sava Amphitheatre. In fact when you walk next to Save you would be able to look at the composition subway underneath you (under glass).

Such a traffic solution would solve problems of physical separation between this part of coastline Sava river and the urban matrix of which currently crosses the existing railway track, and prevents spatial integration with Karadjordjeva Street.

As part of the promenade as a new symbol of the city as something that would be in this story had a very important role in the energy efficiency plan is set high and the first Belgrade windmills. The plan is to meet its energy capacity of the entire new complex.

Karađorđeva Street is one of the oldest streets in Belgrade. Sometimes represented the most important commercial area of town. What old Water City represented in the medieval town of  Belgrade, it is the zone Karađorđeva Street was in the old Belgrade at the end of the nineteenth century and early twentieth century.It was fomose for many famous restaurants, bistros and hotels.In the meantime the trade and business from the bank of the Sava and moved to Terazije Square and Knez Mihailova Street, and so Karađorđeva Street especially after the Second World War and the collapse of many buildings simply become silent area of the city.

Old Djumrukana the old building, the customs, the Austrian Consulate raised in the thirties of the nineteenth century in the spirit of Western eclectic architecture, whose purpose has changed. This building is famous, because here’s being played first theatrical performance in Belgrade in 1841.

Recent research tells us that on the average foreign tourists question, what is it that it leaves the biggest impression when you visit Belgrade, in 95% of cases will tell you – people or citizens of Belgrade.

Bearing in mind this fact, the guiding idea of this project and have just been – the people. New Belgrade large terraces are designed at the same time as new symbol of entering the old town and as a final solution for direct links between the two historical entities – Kosančićev venac and old Sava river port, tourist port Belgrade today.

The big challenge was at the same time to respect the old background ambient atmosphere, and the buildings of modern architecture.