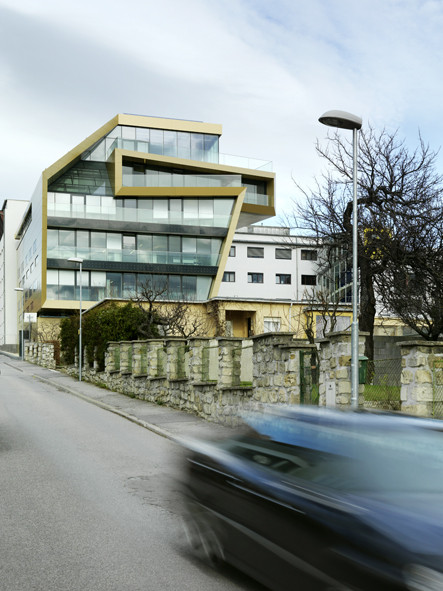 “The design of the building playfully responds to the restrictions imposed by the building regulations as well as to the schedule of accommodation for the different floors, and develops an encasing figure that encloses all the activities of the bank in a continuous form. The continuity of the building envelope conveys a sense of identity to both staff and customers, while the building’s volumetric shaping ensures it a striking role in the appearance of the town. It is made of aluminium sandwich panels whose coloring might awaken associations with coins or the bank’s corporate identity. Narrow window openings at calculated positions in the façades respond to the need to screen people who work at computers from glare."

This basic idea – quoted from the explanatory report that accompanied from the competition entry – was deepened and developed further. To the east and the west the building is encased in a metallic façade made of Alucobond panels that is perforated by windows arranged in a specially developed layout. This layout allows unfamiliar views outside, but also offers the staff an almost intimate work atmosphere and provides protection against glare for those working at computers.

The amount of glazing is based on guidelines on lighting for work places. This allows a large area of solid wall which, thanks to its building physics qualities (good thermal insulation and good heat storage), contributes to optimising the building’s energy balance. The full-height glass façades to the south are a response to the marvellous views across the plain of the River Wulka and, thanks to regulatory elements (sun screen system), can allow energy (solar heat gain) to enter the building or can screen most of it. 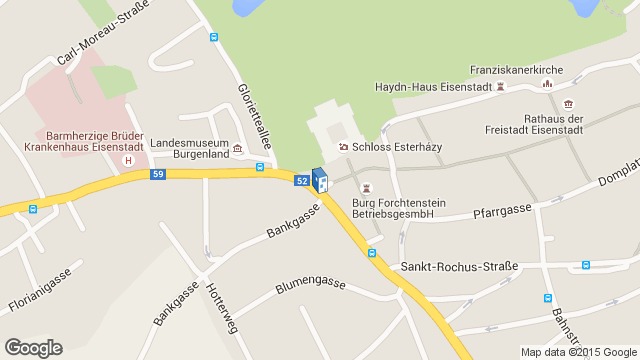 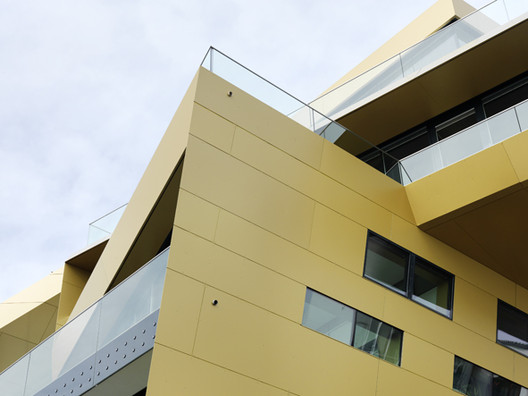