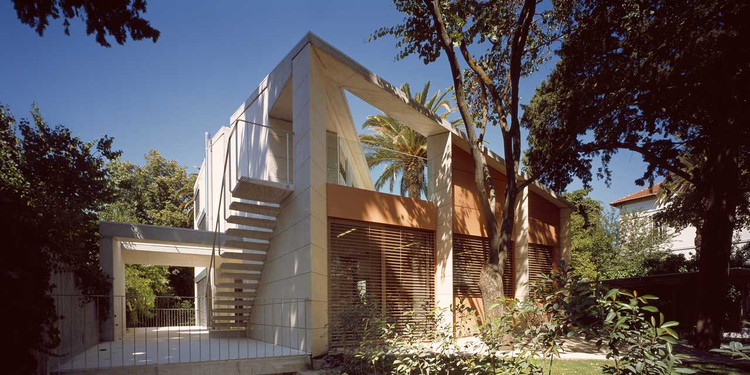 Text description provided by the architects. The house is located near downtown of Kifisia. Is an area with low density and it is consisted mostly of neoclassical villas of the early beginning of the 20th century. The two-storey residences disappear behind the dense vegetation that prevails.

The displacement of the house was defined by an effort to conserve the big old trees.

The new building is simple in the geometry of its volume, so that it completed by the elements of the environment - the old villas and gardens.

From the entrance, the house shows up like a ground floor archway in symmetry with the listed building. As one moves towards the house he realizes its actual size while the three levels appear together with the underground floor. The triangular columns gradually get higher, with fixed proportions.

A correction of distortion applied on the view from the point A, so that the house appears to be a rectangular façade with 8 columns in φ proportions.

As a sequence of the correction, a diagonal plane on the top intersects the box shape building. The subtraction from the roof creates an open-air veranda on the 1st level, closed across the entrance in order to shelter the bedrooms from the busy street of the museum opposite.

The space between the building and the west edge of the plot is transformed to a sheltered patio - continuity of the indoor ground floor, especially during the summer. 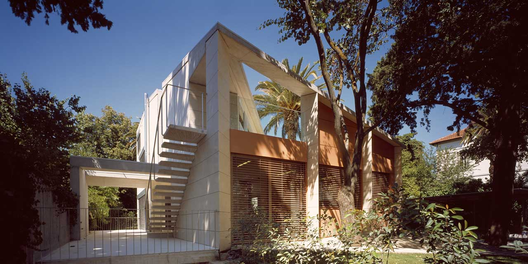