Italian-American architect Paolo Soleri (21 June 1919 – 9 April 2013) made his name as a countercultural icon and urban visionary, best known for his theory of "arcology"—a combination of architecture and ecology—and for Arcosanti, the prototype town in the Arizona desert which embodied his ideals and became his life's work, which he founded in 1970 and continued to work on right up until his death in 2013. 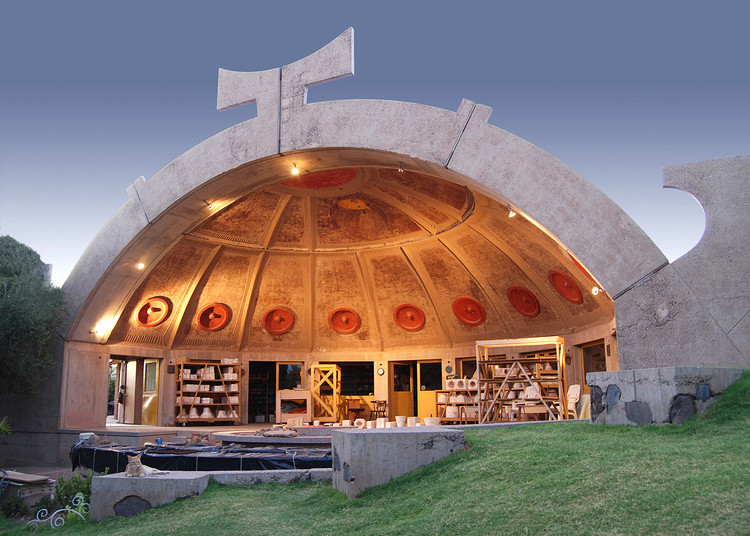 How much space do we really need to take up in order to have rich and rewarding lives?

In this short documentary for The Atlantic, filmmaker Sam Price-Waldman visits Arcosanti, the revolutionary experimental community and urban laboratory envisioned by architect Paolo Soleri. Since its founding by Soleri in the northern Arizona desert in 1970, the city has grown and evolved as it has demonstrated how to create a walkable, social city that could meet the needs of future societies.

The video is narrated by architect and Arcosanti co-president Jeff Stein, who explains how the city is able to maximize the potential of architecture for providing for communities, and features interviews with several Arcosanti community members.

The Paolo Soleri Amphitheater at the 2016 SITE Santa Fe Biennial

SANTA FE—Architect Conrad Skinner’s five-year research project into the history of the Paolo Soleri Amphitheater plays a lead role in much wider than a line, SITE Santa Fe’s 2016 biennial dedicated to new art from the Americas. The exhibition which features 35 artists and two archival projects including Skinner’s, runs at SITE Santa Fe through January 8, 2017.

The Dome in the Desert by Wendell Burnette

A glass house in the desert? Was it an architectural caprice, a folly, or was it a solution to the problems of desert living whose appropriateness is still not recognized? Having had the experience of living in The Dome for a full year, through all the seasons, I felt it incumbent upon myself to take a fresh look at this remarkable work of architecture.

Paolo Soleri, its designer, was born in 1920 in Turin, received a PhD in architecture from the Torino Politecnico, and in 1947 came to America to study with Frank Lloyd Wright, remaining with him for just over a year. Mark Mills, who assisted Soleri in the construction of The Dome, was born in 1921, received an architectural engineering degree from the University of Colorado, and studied with Wright for four years. It was at Taliesin that Soleri and Mills became friends. In 1948, when they and two other apprentices were working on an experimental structure at Taliesin West, which became what is known as the Sun Cottage, there was a misunderstanding with Wright that led to all four of them leaving. Soleri and Mills went to work with a developer, providing design work for some condominiums at the base of Camelback Mountain, below the north face in Paradise Valley. Soleri developed a scheme that involved a tower element supporting a hex form canopy and he and Mills built a mockup of Camelback out of concrete block and wood. It was shortly after this that “the Cli,” as she was fondly called, came along.

The complete article after the break...

In 2010, SMoCA initiated a series of three exhibitions exploring the trajectory of Paolo Soleri's art, architecture and philosophy. Paolo Soleri: Mesa City to Arcosanti is the second in the series. This exhibition begins in the early 1960s when Soleri shifted his focus from bridges and residences to large-scale urban planning based on environmental accountability. Soleri's first comprehensive vision of a community is Mesa City, an example of what he calls an “arcology,” or an architectural project based on the synthesis of architecture + ecology. In Mesa City, Soleri combines the goals of high-density living, a vibrant urban space, respect for natural resources and a commercial sector based upon creativity. The exhibition will end with Arcosonti (arcology + Cosanti), a project built in the 1970s near Mayer, Arizona.

Paolo Soleri spent a lifetime investigating how architecture, specifically the architecture of the city, could support the countless possibilities of human aspiration. The urban project he founded, Arcosanti, 65 miles north of Phoenix, was described by NEWSWEEK magazine as “…the most important urban experiment undertaken in our lifetimes.”

His own lifetime of work is represented in models, drawings, books, lectures and museum exhibits throughout the world. Soleri’s exhibition in 1970 at the Corcoran Museum in Washington DC – and the concurrent publication of his landmark book, CITY IN THE IMAGE OF MAN – changed forever the global conversation about urban planning on our living planet. His term, “Arcology” joining the words architecture and ecology to represent one whole system of understanding human life on the earth is meant to serve as the basis for that conversation.

More on the life of Paolo Soleri after the break...

“Of all things that are man-made, bridges are, with dams, the most “structural,” single-minded, and imposing. As connectors at a breaking point, they have a heroic force that is aided by a challenging structuralism. As a strand of continuity in a non-continuum, the bridge is full of implied meanings. It is the opposite of devisiveness, separation, isolation, irretrievability, loss, segregation, abandonment. To bridge is as cogent in the psychic realm as it is in the physical world. The bridge is a symbol of confidence and trust. It is a communications medium as much as a connector.”