Frank Gehry's Grand Avenue towers are finally set to begin construction, over a decade after the project was initially proposed. Conceived as a public-private partnership, the towers are sited across from Gehry’s Walt Disney Concert Hall in downtown Los Angeles. The project was designed from a central retail core into the two terracing towers with a mix of retail, entertainment and residences. The $1 billion complex aims to turn Grand Avenue into a full entertainment district. 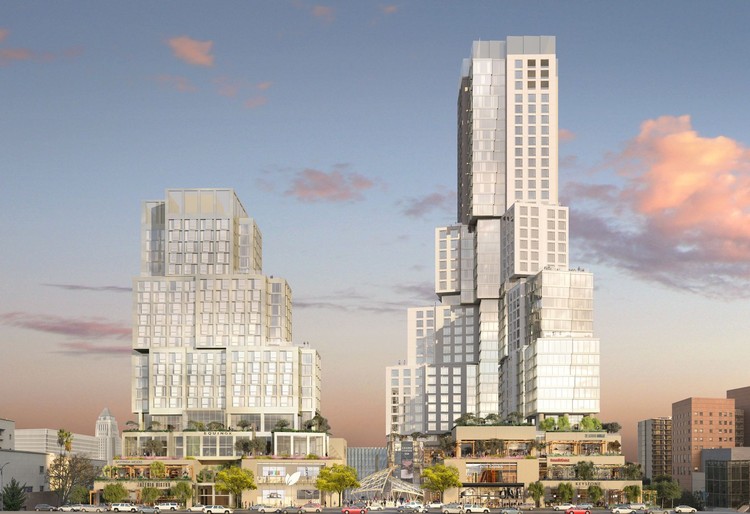 How Would You Design Grand Avenue?

"Will Grand Avenue finally turn around? Most likely not until they make it a two-way, add more trees, bike lanes, and pedestrian amenities. Buildings alone can’t do it, no matter how daring, novel (or expensive) the architecture." -- Guy Horton, The Indicator, "Ten Years Later, Has the Disney Concert Hall Made a Difference?"

The latest controversy surrounding the Grand Avenue re-design, the long-awaited project to develop the stretch of land east of the Walt Disney Concert Hall, is the re-instatement of Frank Gehry, a move which occurred after the city of LA rejected plans from mega-developers Related Cos. (designed by Gensler in collaboration with Robert A.M. Stern) for being "overly commercial."

Of course, while the Related Cos. plans may have failed to wow the city, the decision to bring Gehry back to the project hasn't exactly been embraced either. A must-see article in Zócalo Public Square asks four urban planning experts, "what would you do with Grand Avenue?" In his latest ArchDaily column, Guy Horton offers his opinion: any re-design must rely on activating life on the street-level, rather than on one architectural solution. Well, ArchDaily readers, now we'd like to know your thoughts on the matter.