nArchitects have released a trailer featuring the development of their “My Micro NY” proposal, which won the adAPT NYC competition in 2013. The competition was conceived as a way of addressing the need for 1-2 person apartments in New York City (see the winning scheme and finalists here). My Micro NY, which re-negotiates minimum size requirements for New York apartments, consists of a series of modular apartment units, that when constructed together, will form the tallest modular building in the city. Watch the video to see the building being erected, and stay tuned for the full feature to be released upon completion of the building.

In an effort to address housing concerns throughout the city, New York City held the adAPT NYC Competition in search for a micro-unit apartment building that would be developed into a new housing model for the "small household population". The winner and five finalists were announced earlier this week, revealing a sharp focus on consolidating various living areas to save space and resolving to give multi-functionality where ever possible. There is also an emphasis on community in each of the proposals, making up for the small units with more public amenities within the building. Join us after the break to take a closer look at the projects. 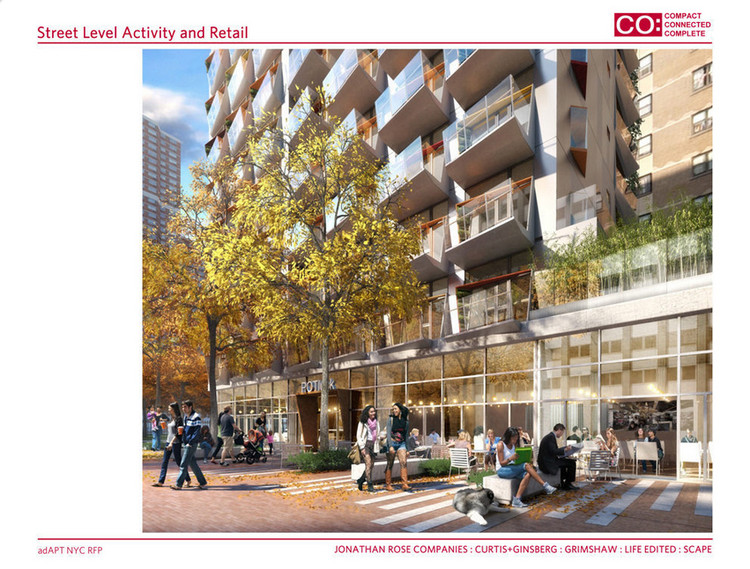 New York City Mayor Michael Bloomberg has announced the winner of adAPT NYC - a city-sponsored competition that challenged developer-led teams to design an innovative micro-apartment that responds to 21st century housing problems. With an all time high of 8.4 million people, and an expected million more by 2030, New York City’s shortfall of affordable one and two person apartments is continuing to grow at a staggering rate. In an effort to solve this imbalance, the winner of adAPT NYC will build an experimental project on a piece of city-owned land in Kips Bay, Manhattan, that has been alleviated from the 1987 density restriction that requires all new apartments to be greater than 400 square feet.

“The growth rate for one- and two-person households greatly exceeds that of households with three or more people, and addressing that housing challenge requires us to think creatively and beyond our current regulations,” said Bloomberg.

So, who won adAPT NYC? Find out after the break!

What's in a Number?

What do you think of the number 300? Mayor Michael Bloomberg found the number to be just the right amount of square feet necessary to attract a younger demographic to live in the city. In a city-sponsored competition entitled adAPT NYC, the Department of Housing Preservation and Development is inviting developers to submit proposals for a new construction project in Kips Bay, Manhattan. The challenge is to design what Bloomberg calls “micro-units”, between 275-250 sqf of living space, complete with a place a kitchen and a bathroom, but no closet is necessary. “Developing housing that matches how New Yorkers live today is critical to the City’s continued growth, future competitiveness and long-term economic success,” said Mayor Bloomberg. “People from all over the world want to live in New York City, and we must develop a new, scalable housing model that is safe, affordable and innovative to meet their needs.”

More about the competition after the break.