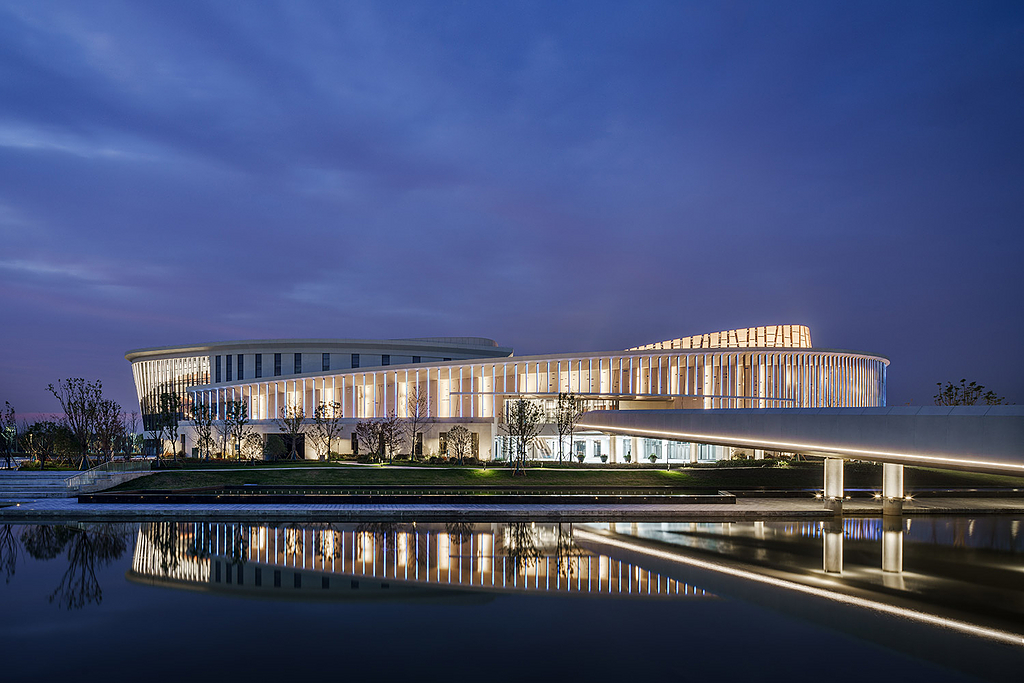 The Jiu Ke Shu (Nine Trees) Future Art Center near Shanghai is a new centre for the performing arts. It was designed by architect, Atelier Frederic Rolland and the Shanghai Construction, Design & Research Institute. As a new public building it not only acts as a building used for art and drama, but it has been designed to be an 'all are welcome' retreat for anyone wanting to escape the busy city streets. The complex includes 5 theatres, various types of rehearsing spaces, as well as spaces for public interaction and relaxation.

The name Jiu ke Shu (Nine Trees) aims to make a reference to the infinite. Nine being a number that represents infinity as nine multiplied by itself returns to nine. (9 x 9 = 81; 8 + 1 = 9). Trees making reference to its natural wood surroundings, and the continuous cycle of nature through the seasons. This inspiration from the natural surroundings was taken further into the details of the building, The architecture is spacious and dominated by curved lines that connect back to nature. The floor plan is shaped like a seed and the abundant use of glass creates a sense of continuous permeability between the indoors and outdoors.

The building’s respect for the environment can also be seen in the systems, which ensure that energy consumption is significantly reduced. iGuzzini luminaires have been used in the great hall where Reflex recessed luminaires brightly illuminate the interweave of the ceiling beams. The large bas-relief that is located in the centre of this vast space is lit, homogeneously and with no shadows for its entire height, by Palco and Front Light projectors. Reflex recessed luminaires also light the perimeter of the vast Grand Theatre hall, which is the largest space in the complex that can seat up to 1200 people.

Light Up Earth recessed luminaires are used outside to create homogeneous lighting for the entire external surface of the first floor of the building, while the theatre’s upper crown is lit by Woody projectors. A rectangular version of Walky recessed luminaires guarantee visitors’ safety when climbing the building’s low access steps.