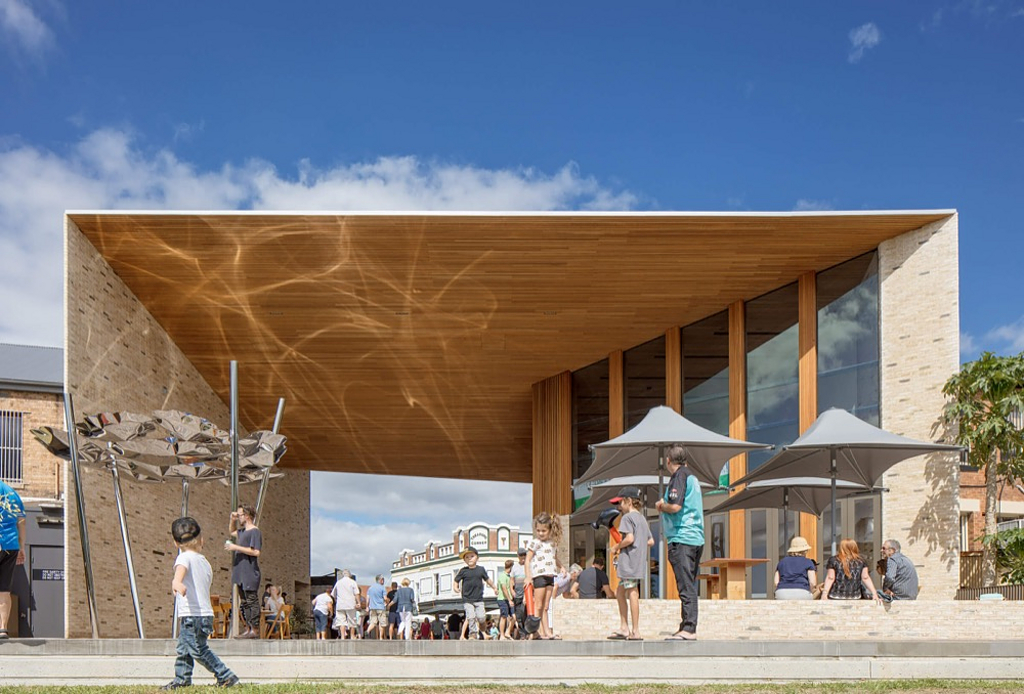 The Maitland Riverlink set in the country town of Maitland has a design that complements the character of its surroundings and serves to re-establish the connection between the city center and the Hunter River. The feature timber ceiling was made of click-on battens from Sculptform which were installed by a simple push-click method onto concealed mounting tracks.

The team at CHROFI – worked closely with McGregor Coxall, to design a landmark which augments the character of Maitland, rather than overshadowing it. The gateway style of the structure seeks to reconnect the town and the neighboring Hunter River which had been built along different tracks after floods caused the city center to grow away from the river, rather than embracing it as a natural feature. The Riverlink connects the two areas visually and provides the community with a smooth transition point.

Sculptform provided the feature timber ceiling for the Maitland Riverlink with Click-on Battens in Blackbutt. The materials provide a human scale; the tactile materials invite a visitor to touch the building and the precise angles of the walls, ceiling and floor, twist and distort the central space, to subtly slow movement through.

Blackbutt provided the specified color for the project and was left uncoated to allow for the tone to change over time. The linear texture of the timber battens matches the aesthetic of the clay brick on other parts of the project and as the timber fades, the color will also start to match the light-colored brick from a distance giving the building a more singular, seamless appearance.

A primary consideration when installing the feature timber batten ceiling was the ability to include access panels. With twelve access panels across the whole ceiling, the highly customizable nature of Sculptform Click-on Battens became integral for installers on site.