Through the Lens: The Social Implications of Green Roofs in Film

Film often makes a mockery of architectural features. Glass facades are obliterated by gunfire, grisly murders are set against a white modernist palette, deconstructed stairs are the cause of nasty accidents or ludicrous slapstick, and you just know a tensile fabric roof will be shredded by the time 007 is finished with it.

There is one architectural feature however that has benefited from very complimentary treatment by the film industry, and surprisingly it is a sustainable one. Green roofs and other “architectural” green spaces have been popping up regularly in mainstream movies over the past decade: blockbusters including The Vow (2012) and Source Code (2011) utilized the greenscape outside Gehry's Jay Pritzker Pavilion in Millennium Park; last year the Vancouver Convention Centre was featured in both Godzilla and Robocop; and Kaspar Schroder’s 2009 uber cool documentary My Playground, about the sport of parkour (the art of bouncing off buildings made famous by the opening scenes of Casino Royale), features BIG’s Mountain Dwellings in Copenhagen. And we cannot forget two of the biggest film franchises in history: both of Peter Jackson’s Lord of the Rings and The Hobbit franchises feature green roofs in their portrayal of Hobbiton – home of the virtuous and incorruptible Hobbits.

The work of a Production Designer has many parallels with that of an Architect. Both are tasked with bringing to life a conceptual environment, keeping true to that concept through budgets, time pressures, logistics and regulations. Both share a similar creative process, developing the ideas and then collaborating and coordinating with a team of professionals to give those ideas physical form. However, Production Designers are concerned with creating environments to be captured on film only for a matter of moments. Not something a standard Client is likely to request from an Architect.

While the freedom of not having to fully resolve building details – just making it look that way (not to mention the added bonus of avoiding the inevitable callbacks for defects), may seem appealing, consider having to dismantle everything you have created at the end of the process. Somewhat of an anticlimax you would think.

Through the Lens: Why High-Rises Need A Hero

Since the emergence of the modern multi-storey building in the late 19th century, screenwriters and art directors have embraced the high-rise building as both backdrop and prop in the drama of feature films. It’s easy to understand the fascination. The precarious nature of a skyscraper – their height, their reliance on competent engineering and emergency systems, and their all-controlling security – provide abundant opportunities for action and disaster. And all with a built-in view.

But while Hollywood loves a high rise, it hasn’t treated them well. Plot lines usually tap into a general scepticism about the kind of engineering feats which make them possible and often carry some underlying moral message about the dangers of technology and advancement.

Through the Lens: Art Deco's debt to Agatha Christie

This article comes courtesy of Charlotte Neilson, the author of the fascinating design blog Casting Architecture. Her column, Through the Lens, will look at architecture and production design in TV and film.

The categorisation of period architecture generally remains firmly in the realm of the professional or amateur enthusiast - let’s face it, you can go through life without knowing the difference between a Corinthian and Ionic column without too much inconvenience. Oddly, however, most people are able to name a few of the main features of Art Deco architecture fairly easily - the curved corners, stylised forms, the use of bakelite and chrome, the transport motifs.

It’s interesting that this period is so much more familiar to us, considering it spanned quite a short timeframe compared to other architectural styles; the Arts and Crafts and Art Noveau movements, for example, which both occurred in a similar time frame to Art Deco, are much less known to the wider community.

It’s possible of course that Art Deco is just more omnipresent because of its universal appeal, or its uniqueness, but I think most of the credit should go to Monsieur Hercule Poirot.

Learn more about Agatha Christie’s contribution to Art Deco, after the break...

Final Preservation: What Cinema Has That Architecture Doesn't

This article comes courtesy of our friend and cenephile Charlotte Neilson, the author of the fascinating design blog Casting Architecture, which discusses architecture and production design.

The life of a building - a few hundred years, if a building is lucky - is just a blip when compared to the billions of years required to shape the natural landscape. Even briefer is the work of a film maker: a pursuit created for momentary entertainment, which reaches completion in just a couple of hours. Strange then, that film has often stepped in to preserve buildings who have met an early demise.

While Architecture and Film have always had an uncomfortable relationship (be it the movie industry’s portrayal of modern buildings as cold and soulless - and usually associated with less than savory occupants or the stereotyping of Architects themselves as delicate, impractical types), the inclusion of a building in a feature film can often become an important part of a building’s story. And sometimes its last bastion.

More on Architecture preserved on Film, after the break...

From Psychopath Lairs to Superhero Mansions: How Cinema and Modernist Architecture Called A Truce 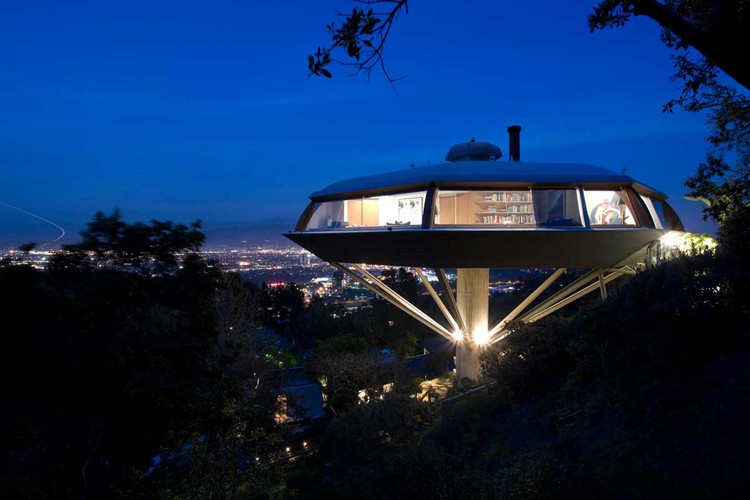