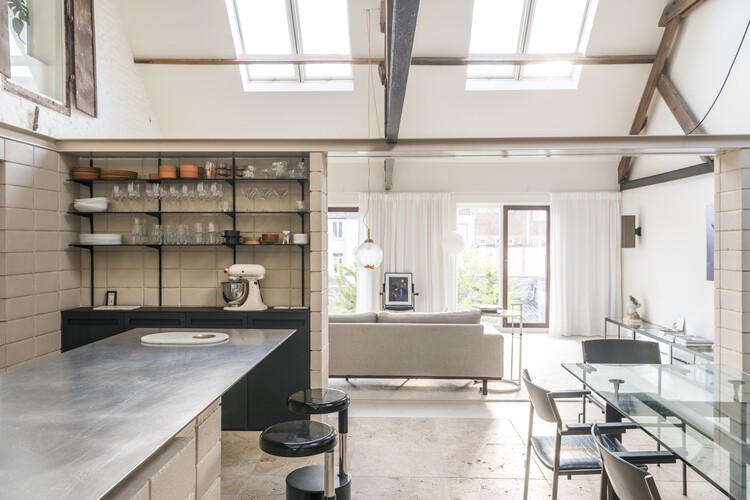 Text description provided by the architects. The project is located in the middle of a residential building block, on the outskirts of the city center of Ghent. Characteristic of this 19th-century periphery was the mix of housing, crafts, and small industrial activities. Accessible through a small passageway at a street formed by townhouses lies the site of the former ‘Ghentbruges Steambrewery’ (Gentbrugsche Stoombierbrouwerij )on a surface of 2700 sm. The city brewery was founded in 1890 and takes its name from the then innovational technique of steam-driven machinery.

Although the brewery was very popular for its beers and sodas around the city of Ghent the factory’s success didn’t last long. Due to severe damage to the infrastructure in WOI and the high costs of small-scale brewing, later on, it was no longer viable and was closed down. In successive decades the site was occupied by stone masonry and after that, it became abandoned. From the former brewery site, there are three prominent brick buildings still remaining, adjacent to the central courtyard: the house of the factory director (left, gray), the actual brewery building with the kettles and malt rooms (middle, white), and the water tower, housing the steam machine (right)

Since 2010 the site has been revitalized. The directors’ house has gotten new inhabitants and four warehouses have been converted to single-family homes. In addition, new work functions have been housed on-site. Up till now a carpenter/ furniture designer, a steel worker, and an architecture officer have been settled there. Other buildings are used as storage spaces, garages, and workplaces of the residents on-site and from around the neighborhood.

In 2016 the last to be reconverted old buildings were put up for sale: the remarkable water tower and the adjacent brewery building. The water tower has a small footprint of 7 by 7 meters and has four (new) floors. The brewery building consists of a volume with three floors over two pitched roofs just behind one another. On the highest floor, under the pitched roofs, grain and hops were stored. On the middle floor, the brewing kettles and malt rooms were found. On the lowest floor, positioned one meter lower than the central courtyard, the barrels were stored.

The biggest challenge of the project consisted of the reconversion from a former industrial building to housing and commercial functions. Urban regulations allowed to the allocation of a single-family home to the brewery building. In order to allow the conversion, all buildings within the building block had to demolish 1/3rd of the footprint of the building itself in order to create a ground-bound garden. In the case of the brewery building, this meant demolishing 200 sqm of floor space in order to create a ground-bound garden. And even so, the garden would be sunk in from the ground level by one meter and completely cut off from sunlight due to the remaining high walls around it.

The water tower itself was only designated for commercial functions, but due to its form not practical in use. By making use of the vast load-bearing capacity of the industrial building and considering the water tower and the brewery as one building, the following proposal to the city’s urban planners was made: Only the back pitched roof of the building would be removed (1/2 of the footprint) and converted to a roof garden, as qualitative and sustainable as a classic ground-bound garden. This way, the underlying floors could remain as they were, and the living spaces positioned on the top floor (with a maximum of daylight). And now considering the tower and the brewery as a whole housing function could be allocated to the tower as well. As additional compensation, the garages in front of the buildings were removed and a new front garden was added, including a large well for rainwater.

That way creates a new composition of functions in the two buildings: the family house has its new entrance at the stately water tower, where the circulation and night functions are found. The living area adjoins the roof garden on the top floor. The middle floor of the brewery serves as an open-plan space for the architecture office. On the lowest floor, workplaces and storage are found.

Due to years of neglect and vacancy, the water tower was in a state of decline. The inside of the building was completely empty. The façade has been restored to its former state. Old and new masonry patchwork reminds us of the history of the building. Inside, the old settlement pit below has been reconverted into a garage. The tower itself has been filled in with new stories, connected with a new spiral staircase, typical of a tower-typology building. At level +0.5 the entrance hall and cloakroom and bedroom. At level +1.5 another bedroom with an adjacent guest bathroom, toilet, and storage room/technical room.

On the top floor the master bedroom, bathroom, dressing room, and toilet are located. In order to retain the historical character of the outside of the building, the tower has been insulated from the inside out. By accentuating the industrial character of at least one surface or element in each space, the past remains sensible. Complementary to the rough industrial textures, the interior is finished with the soft colors of the plasterwork and cement flooring. On the master bedroom floor, the inside finishings stop at the ceiling of the adjacent bathroom and dressing room with a clean cut. Above this clean décor, the old walls and masonry ceiling, and manhole of the former water basin stand out.

After a walk through the small-scaled corridors of the tower, the bright and spacious living space is accessed. The level consists of one closed-pitched roof and one opened-up roof (the roof garden). In between those two volumes, a brick-built ‘box’ has been put in, housing the kitchen/eating area. Functioning as a décor from a theatre, the walls from the box divide the open space into different sequences and give the living space a human scale. The travertine floors and limewashed walls give the décor its own identity in the bigger volume. By building the kitchen island in the same stacked bond pattern and integrating the cooking functions in niches a thin line between the archetype ‘kitchen’ and ‘dining area’ is created. The heavy oak beam and cast iron column remind me of the history of the building. The former service hatch between the tower and the brewery now offers a view between the glass shower and the living area, creating spaciousness in the bathroom.

The roof garden is conceived as an outside ‘chamber’, located in the back pitched roof-volume. A part of the old roof remained and creates a covered terrace. The existing outside walls of the volume have been left untouched, giving a feeling of intimacy to the garden, located in the middle of the large building block. Through the original window openings, subtle view towards the surrounding houses and gardens. The glass path towards the terrace in the back of the roof garden provides the necessary daylight to the underlying architecture office. Thanks to the height of the roof garden at the top floor, the crown of the trees canopy over the garden terrace. The roof garden is a tree house. 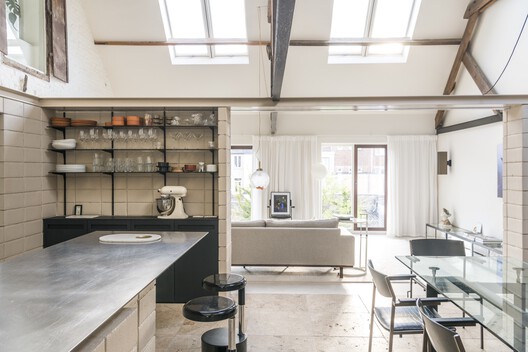