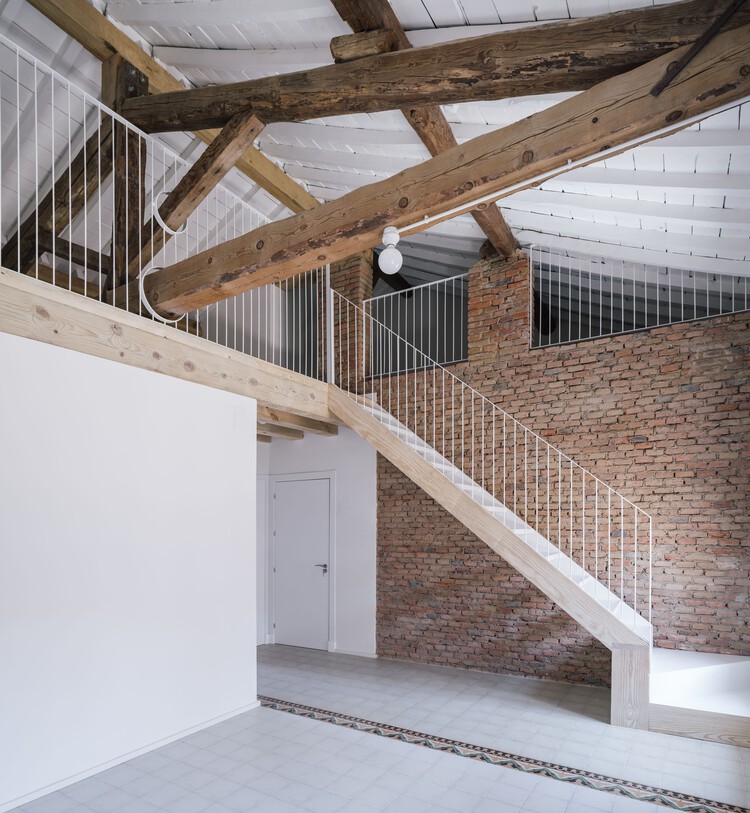 Text description provided by the architects. In this work of transformation, several buildings of different typologies had to be integrated into a single one for housing use. As the main strategy, a double-height space of the old cereal mill has been used to unite the different parts, placing in it the main living area, taking advantage of the fact that it occupies a central position in the complex. The different initial areas were five: a segregated part of another house, the mill, some stables, a haystack, and a high floor above the mill, and the house as a barn or attic, in the form of a single double-height nave.

The promoters are a couple who plan to use the house intermittently for retirement. Children need some independence when they go home because they have already formed their own families, for which the house has been arranged as the sum of several complete units. One part, the main one, is made up of the ground floor with three bedrooms and the main day-use areas. Two other parts are on the top floor as two independent apartments, although well connected with the rest of the spaces. In addition, a series of open spaces have been arranged, which are available to be inhabited in a flexible way, such as the old barn or the mezzanines undercover. A large double-height hallway that occupies part of the old stable and the barn, serves as access from the patio and as a semi-outdoor space - with use as a porch or as a greenhouse according to a glass enclosure that can be removed - for family gatherings connected with the common ground floor living-dining room-kitchen.

For the main entrance, with a door from the street that connects with the town square, a double-height lobby has been recreated with a staircase like those that were built in the town until the 1950s in the highest quality homes. For the locksmiths of the staircase, the staircase of the Casa Chitarrini building (1950) by Mario Ridolfi has been taken as a reference, as well as the current Palissade furniture line by Ronan & Erwan Bouroullec. From that representative entrance space, the house is accessed on the ground floor necessarily through the kitchen, which is integrated into the set of main rooms of the house in the same space. Spatial hierarchies are subverted, so that the barn is a hall for celebrations and the kitchen welcomes visitors.

Some valuable finishes or decorative elements that were in the part of the old house have been extended to the rest of the rooms, in such a way that they are a recognizable motif that helps to effectively integrate the new set. Thus, hydraulic floors or chandeliers have colonized other areas, adding an ambiguous nobility to the old productive spaces. To the same end, the colors of the original flooring have been diffused into the new floors, ceilings and walls, amplifying the imprint of the pre-existing. 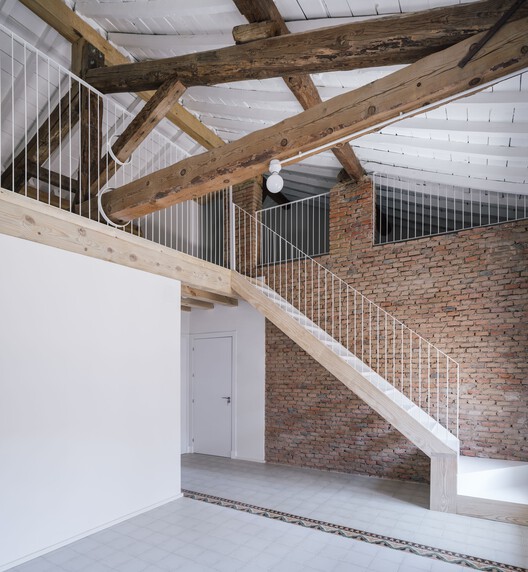