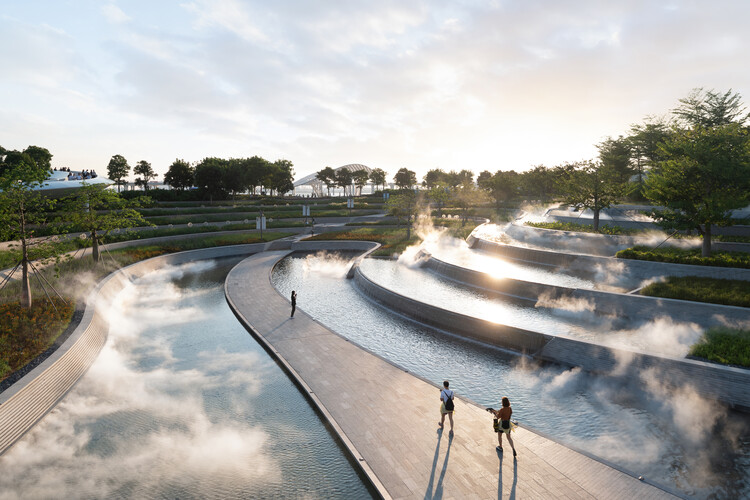 Text description provided by the architects. Since its opening in August last year, Shenzhen Bao'an Waterfront Cultural Park has become an Internet celebrity check-in place for Shenzhen citizens, with total visitor traffic reaching 199,000 people during the National Day Holiday this year. As the new generation of cultural tourism- a commercial complex project promoted by the OCT Group, the project is jointly designed by SWA Group, the lead designer and landscape architect of the park and Laguarda.Low Architects, the lead commercial architect in consortium with AUBE Conception. Located in the geographic center of Guangdong-Hong Kong-Macao Greater Bay Area (the Greater Bay Area) and northwest of Shenzhen, Bao'an District has undergone a gradual transformation and upgrade process into a new center of the international metropolis from a traditional manufacturing area, which also acts as the core to both interlinks the east and west coasts of the Pearl River Estuary and enhances the integrated development of the Greater Bay Area. Sitting within the central green axis of central Bao'an where the urban bustle meets the bay's tranquility, Shenzhen Bao'an Waterfront Cultural Park (the Park) integrates coastal leisure, cultural tourism, artistic experiences, and ecological workplaces to address the creation of "new urban coordinates of an international coastal city and a world-class b ay-side destination".

Covering an area of approximately 380,000m², the project comprises a Waterfront Cultural Park of 270,000m², a 128-meter-high Ferris wheel named "Bay Glory", a performance arts center known as the "Bay Voice", a seaside experiential commercial district of about 120,000m² that connects the east and west coasts, a JW Marriott Hotel "Wings of Light", the "Ocean Mansion" of 88,000m² featuring its Qianhai Bay scenery assets and other functional sectors. It is a landmark project built by Bao'an District together with Qianhai Area to construct a new center for the international metropolis and also people's livelihood.

As the most eye-catching landmark of dreaminess in the entire project, the 128-meter-high "Bay Glory" Ferris wheel soars at the east end of the Park, refreshing the city's skyline. "Bay Glory" innovatively adopts the world's first fin-shaped non-standard stand to hold its all-around Skyview cars, offering the first unique experience of this kind in China. The ultimate 360-degree view brought by the crystal clear glass allows the visitors to enjoy the panoramic scenery of Qianhai Bay, where the sea and the sky encounter each other.

The celebration plaza sits in the very heart of the Park where locates the "Bay Voice" Performance Arts Center. Designed by the master architect Yan Xunqi, the Performance Arts Center mainly consists of a 1500-seat grand theater and a 600-seat multifunctional theater. Inspired by "music symbols", the unique form of "water-eroded stone" makes seawater elements and music characteristics a perfect fit. When night falls, the themed"Kunpeng Dreams" light-water show will dance with the fountains on the façade of "Bay Voice" along with the music, bringing the citizens an atmospheric richness of culture and art in combination with the music and theater festivals held regularly here. As the performing arts venue of the highest standards in terms of its comprehensive facilities and equipment in Shenzhen to date, "Bay Voice" will also join Bao'an Library and Youth Palace to form the cluster of three major cultural public buildings as the focal point of the central green axis along the coastline.

The Art Park on the east side celebrates multiple steel structure art installations of powerful visual impact conjoining with its complicated topography, providing the citizens with assorted landscape and art experiences that are constantly changing, whilst the feature bridge that leaps over the bay soon blooms into a hot spot for photography. Incorporating the feature walls, pavilions, grand steps, rockfill banks, and other attractions, the waving coastal walk offers the public a comfortable variety of waterside enjoyment.

The Sports Park on the west side, on the other hand, provides diversified activity spaces and event venues for the family and the young. The Canopy Plaza plays the core role of charm with its cutting-edge laser technology creating a dream world for all. The skateboard park of Olympic-standard, the urban beach of family-friendliness, and the novel children's playground of liveliness together compose a modern sports park of dynamism. With cantilevered platforms, boardwalks, viewing pavilions, and sequential trees interspersed along the Moon Bay Avenue, a romantic coastline is thus formed.

On the east and west coasts of the park scatter commercial blocks of multiple ground floors that cover an area of over 50,000m², where architecture interweaves with nature, commerce, and leisure to create a brand-new dining-shopping experience. The Ocean Mansion of 88,000m² sits adjacent to Hailan Road, consisting of 4 multi-purpose ocean-view president office towers and 3 individual ecological enterprise towers, which overturns the current paradigm of the conventional high-density centralized office buildings in central Shenzhen, establishing a low-density global corporate headquarters that emphasizes ecology, sharing, comfort and communication in the Qianhai Area with rocketing land costs.

Shenzhen Bao'an Waterfront Cultural Park will undoubtedly bring a new round of upgradation for Bao'an District and even the Greater Bay Area, establishing itself as a versatile comprehensive urban park that organically integrates the bay and the green, the city, and nature, culture and vitality, leisure and business. It also offers the citizens a new water-loving center for coastal life that incorporates cultural tourism, art experiences, and technological innovation by the seaside. 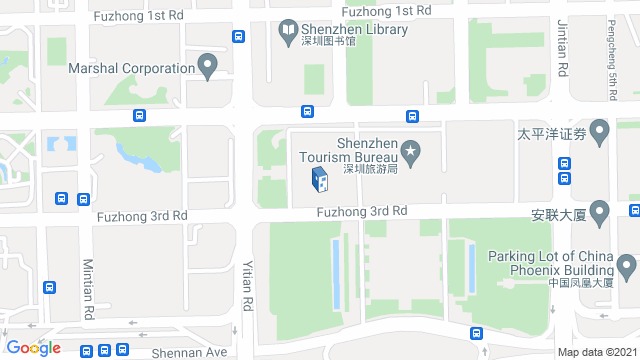 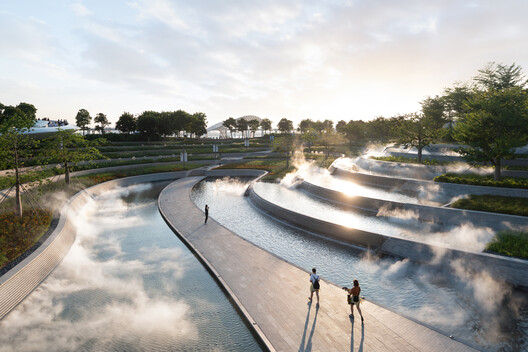