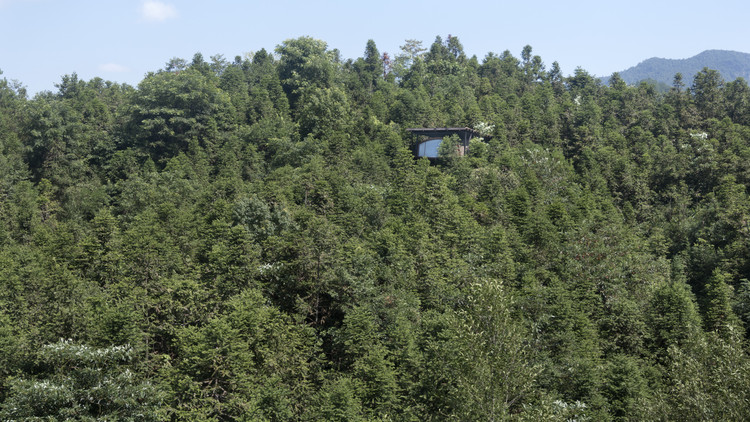 Text description provided by the architects. The project is located in Qiyunshan Town, Anhui Province, a 1-hour drive from the renowned Mount Huangshan. In this small village with about 2000 local residents, tourism is not highly developed. There is only one newly built hotel with a small number of tourists. Most of them sojourn here since the village is close to Mount Huangshan which is their real destination. Mount Qiyun, two kilometers away, is one of the sacred Taoist Mountains and also a famous scenic spot for its Danxia landform. Around the village, gentle mountains are densely covered with pine trees and there is no mosquito even in summer. As a part of a distributed hotel, our project stands in the pine groves. The client hopes that the hotel rooms are independent of each other and only connected by meandering roads. Hotel rooms of the first phase are delegated to different architects. They share three themes, couple, family, and friend gathering. We designed a couple of suites among them.

An architecture or an object. What the client needs is not a unique building, but a free-standing architecture prototype. It would adapt to different terrains with slight changes. This tiny treehouse is intended for only a couple. So we suppose it would be like an object, a piece of big furniture, a stretched tent, or a nest. In our initial vague imagination, it seems to be a campstool more than a building. (campstool: a small traditional Chinese seat. Wooden legs crossed as support, canvas or hemp rope tensioned as surface. It is foldable and easy to carry.)

Location. There was no road but a trail trod by staff on our first site visit. We had to clean up the twigs to get through. The client guided us to survey the entire mountaintop. Since the distant scenery is obscured by the dense grove, we can only imagine the view according to our topographical map and the vague sight between the leaves. Eventually, we chose a spot facing the south valley and not far from the planned road. We measured the heights of trees on site. Once the treehouse is higher than the canopy, there will be a broad view.

Vague image. “intermediate between object and building ”¬—on this theme, we kept trying various ideas in the first stage of design. Memories always emerge inadvertently. An image of a primitive watchtower came to mind. It is from Hayao Miyazaki’s “Princess Mononoke”. Three huge logs firmly root in the ground and converge gradually upward. From the middle binding intersection, they diverge again. Among the upper parts of logs, a triangle viewing deck is fixed. And a larger thatched roof covers on top. All the elements stay in their basic form, simple and straightforward. Why are these images interconnected? Either campstool or watchtower is dualistic formed. The supporting part is based on the logic of mechanical force, while the upper part’s form is related to the human body. But not merely being juxtaposed, they are adapted to each other. The surface of a campstool for sitting is also part of the structure. The deck and roof of a watchtower need to be triangle as well, otherwise, it would cause a lot of trouble. In Zumthor’s Steilneset Memorial in Norway, a long tent is pulled up by a row of wooden frames, and the metal feet lift it up from tides. Consider other stuff in daily life, such as umbrella, sailboat, suspension bridge, kite, many of them are composed in a similar way. Look at them, we can always feel a kind of—tension? This impression might be derived from the bones and muscles of our body, or flowers and trees.

Two or three elements? What is the supporting like? What is being supported like? These questions were difficult to answer at the outset. We started with trying to combine two elements into one integral form. Some promising ideas came to mind, but most of them cannot work out because of a difficult issue—we intended to make a simple bedroom space. It is a nest among treetops rather than a building. Stiff furniture and trivial equipment, such as toilets, showering, storage, air-conditioner, ventilator, etc. do not fit in it. Finally, we decided to have all this equipment packaged on its back. This “backpack”, containing all the essentials, is also the vestibule. Guests step into the soft living space from it. There is no longer equipment in this space. Only fresh air is breezed into by air-conditioner from the top of the passageway.

Geometrization of the capsule. The initial idea of the bedroom is to put a soft space on the supporting frame. At the beginning, the ceiling and floor are one curved face, like a curly blanket. But we thought the boarders on two sides were a bit stiff. It looks like a section being cut from a form extending on both sides. While bedroom, a space in which people enclosed, should be more like a capsule or nest. Then we designed an opening towards the scenery. Its front is lifted a bit, rendering a sense of safeness. The capsule is not placed “on” the frame, like a teapot on a table which is indifferent to each other, the capsule is sitting “in” the frame, just like a man sitting on a saggy sofa, seems comfortable and serene. But in consideration of low-tech construction, it is necessary to find a way to geometrize this soft-shaped capsule. Its bottom planks is always parallel to the supporting braces. With the tilt angle of the braces changing, the bottom surface also curving with them and formed a ruled surface. Therefore it can be assembled by straight wooden planks. The edge lines of side or top shells are 2D-curves, which makes them easy to be prefabricated. Workers can install these prefabricated frames according to the preset angles and fill them with sublevel keels. 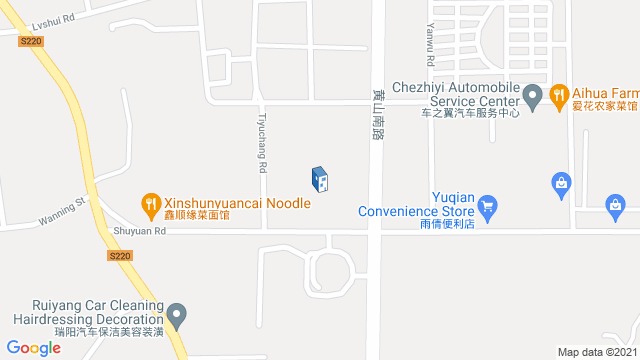 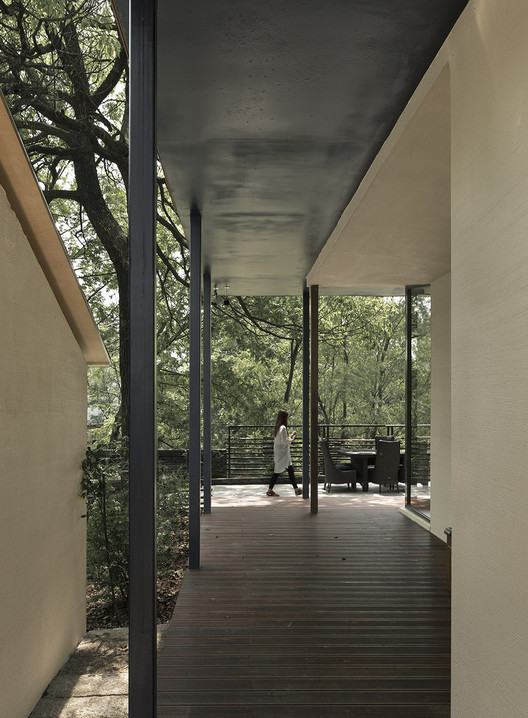 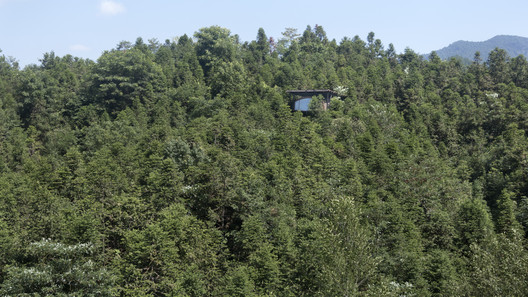