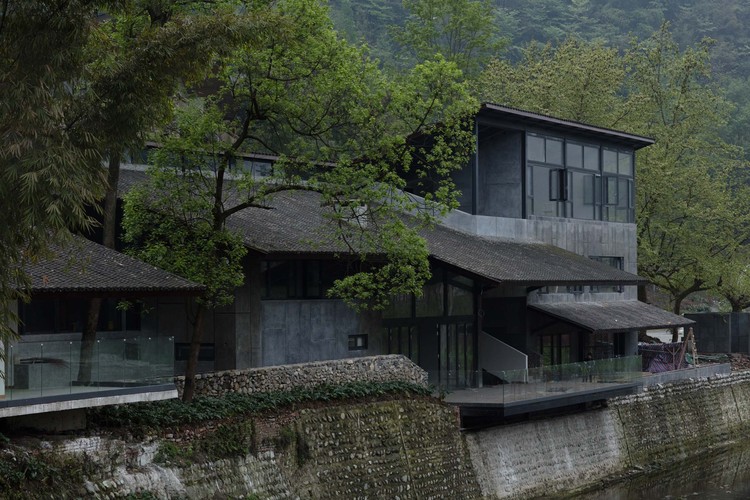 Former-Country Food Workshop: The cascading eaves on the creek. We were impressed by the height difference of the site, the 5 trees in the courtyard, the bamboo growing on the embankment, the special terrain with the stream in front of the door and the road at the back, as well as the vegetable field houses on the other side of the river. Combined with the needs of the village, we came up with the idea of a "Bacchanal under the eaves", where the main production is tofu, sesame cake, and cold noodles, but also has a shared open production space and display space, incorporating the traditional village fair scene into the open space under the eaves to create a special new experience of the village fair. Because the topography of the site is high along the road side and low near the stream side, the program layout of the whole building is divided according to the production flow and leisure flow, and the main entrance of the whole building is set near the road intersection, keeping a certain distance from the bridge.

The production area breaks the original large space form and is divided into several relatively independent small spaces, which are linked together in the form of clusters through a straight aisle. There are two production spaces, one is the sesame cake production area, the production environment is relatively dry, and it meets the program needs as a long-term visit and display, so the location is close to the main entrance side of the display space, and at the same time, the staff changing area, public toilet and reception space are added. The other is the production area for tofu and powder processing, which is placed at the end of the production line for the convenience of later maintenance because of the need for a lot of water. The material storage space and packaging space are placed between the two production areas, on the stream side of the recreational space, which can also be used as an extension space in conjunction with the parent-child experience space.

The recreational space is along the lowland near the stream, around the tree yard and bamboo forest under the continuous eaves, and unfolds in layers according to the changes of the topography. The exhibition hall at the entrance is mainly used for product exhibitions and market exchanges, and can be used as an open space for residents during leisure time. Next to the exhibition hall is the tree courtyard space that retains the five trees of the original tofu workshop, an outdoor courtyard surrounded by the exhibition hall, production channels and packaging space, which carries the original memory of the site and blends into the new architectural space.

Next to it is a staircase that connects the production area and the leisure area, and at the end side of the building is the last space of the whole experience and leisure area, the tea room area. By following the height difference of the river bank, the staircase makes people experience the production more deeply and at the same time feel surrounded by the natural environment, as if walking in the garden, one step at a time, enjoying the natural atmosphere of the countryside and the tempting aroma of the food. The layout of the whole space forms a layer of penetration from rural settlement and natural landscape to leisure life and consumption and production space. And the mutual perception of production space and leisure space makes the production activities no longer closed and mysterious, and also adds a touch of curiosity and interest to the daily leisure excursions.

At first, the roof of the whole building was considered to form a clean and pure single-slope roof in accordance with the site's elevation difference, looking at it quietly lying by the stream from afar, and a few towering trees peeking out from the patio on the roof, so that the image of the whole building would be reflected more strongly into everyone's first impression. However, considering the height demand of the open space along the lowland side of the stream and the requirement of the roof slope for the drainage of rainfall in the southwest, the single-slope roof will cause the production space in the upland position along the road side of the street scale to be too towering and huge, and the other side of the road is adjacent to a 7 or 8 meters high retaining wall, so this sense of oppression will be more intense. Therefore, the final result is a double-slope roof, which not only preserves the space under the eaves facing the river bank, but also reduces the scale of the road side. The ridge of the roof is chosen to fall exactly at the center of the production area access, giving a different sense of scale to the walkway space that usually serves only as a subsidiary traffic program, and through the staggered intersection of the roof scissors on both sides, two skylights are formed to bring natural light into the room.

Later, the village proposed to add a drying space under the eaves, but there was no room for further expansion within the red line of the entire site, so the scissor roof design was used to extend the roof of the production space at the end, facing the road towards the river bank, adding a drying space under the eaves above the tofu and noodles production space, facing the river bank on the west side, which is also a viewing platform for the village center from afar. This is the end of the design introduction of the Country Taste Food Workshop. In the subsequent construction process, due to the inability to permanently reside on-site and communication problems with the construction side, one of the five trees originally designed to be preserved died and two were cut down, and only two trees were finally preserved ......

Now-The Creekside Inn: The "New to New" project creates the surprise of space cascade. With the rapid development of Xiao Shi Village, the industrial layout of the village is constantly being adjusted to the actual situation. Shortly after the main building was completed, we received a commission to transform the tofu workshop into the Creekside Inn. After the renovation, we initially proposed to have 12 rooms, but after a quick review of the original space, we found that if we wanted to have 12 rooms, there would be no public space for the entire B&B, so we proposed a maximum of 10 rooms to ensure that the public space is good enough to enhance the quality of the B&B. In the final layout, all the guest rooms and the restaurant are arranged in the original space near the stream, so that you can fully experience the natural ecological beauty of the countryside and the gurgling stream, and taste the countryside food. The logistics space of the whole public area follows the original production space, close to the highland road side, to isolate the busy road, to ensure the quietness of the guest rooms, and to facilitate the logistics management.

As it faces the previous tree yard, the original sliding door design was eliminated and the entire glass wall was moved to the outside of the aisle, combining the pancake workshop and the aisle as a public lobby water bar and parent-child experience area for the B&B. The additional water bar is the original freezer space, and the original material storage room has been transformed into a logistics and linen space. Through several 4-meter-high floor-to-ceiling glass, the view of the original tree yard is incorporated into the lobby space, where guests can enjoy their vacation time by looking out the window and having coffee and tea.

Through the lobby area, the stairs on the right hand side lead to the dining room, which continues the space design of the original parent-child experience area, only expanding the original kitchen area to ensure the complete dining service needs of the B&B. While the original entrance showroom area, packaging area, tofu production space, tea room and drying platform were transformed into 10 guest room areas. Except for the outer porch of the original showroom area, which was transformed into a private balcony for the guest rooms, the rest of the outer porch space along the river was retained.

The bamboo that was cut down before because of the construction is growing more and more lushly from the dike, the two trees poking out of the tree yard are still standing tall, and the small green tiles that are neatly arranged on the roof are already covered with moss. It's only been a short year but the plants are already growing like crazy here. Walking in, the structural pillars exposed because of the demolition of the wall stood upright in the space, looking extraordinarily powerful, as if there was a little echo with the two trees in the courtyard. Standing under the ridge of the roof, one can see through the entire walkway at a glance, under the towering space surrounded by the pure white wall structure space and the exposed black and gray roof. The walkway is still a walkway, the stairs are still stairs, and the tree in the courtyard is still the same tree that has survived and become more and more lush. The feeling that this space brings to people is still the same as what we thought when we first designed the Country Taste Food Workshop, and it has not disappeared.

As an architect, perhaps we should not be obsessed with whether people use the building in the way we envision but should pursue the creation of spaces full of life, where the users arrange and modify the programs he needs according to their wishes and needs, which used to be a village bazaar, now is a streamside B&B hotel, in the future may be a restaurant, office, etc. Even though the programs change a lot, the essence of the space does not change, it can be salt or sweet, it is still him. 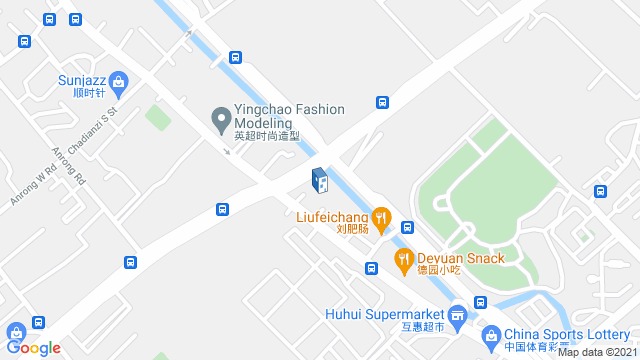 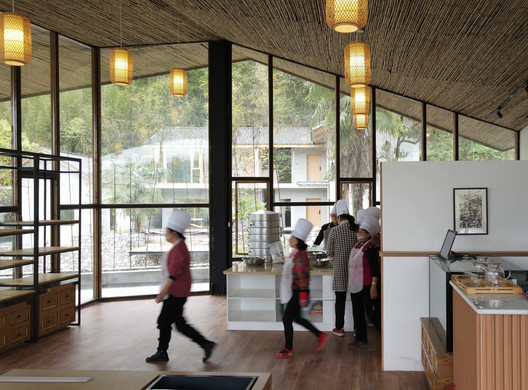 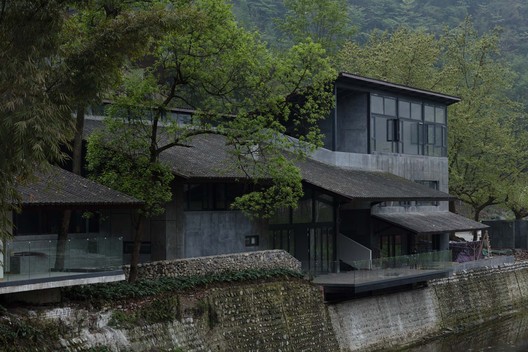