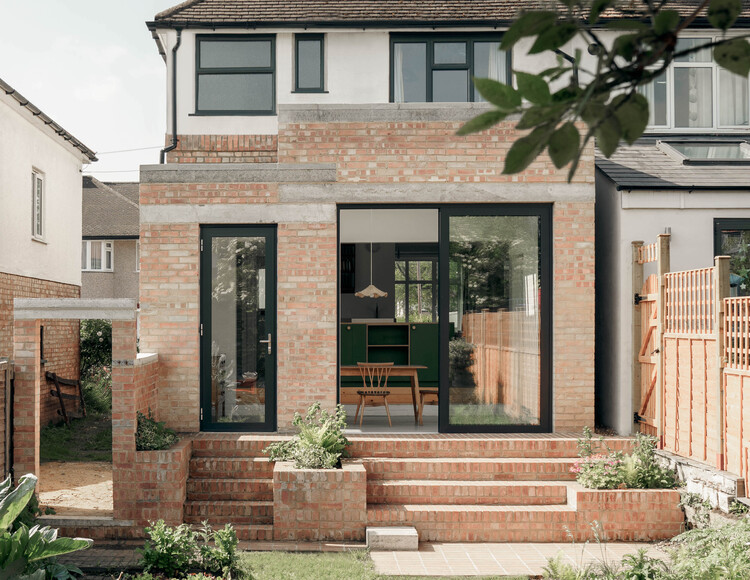 Background. The project’s clients were a couple with two young children looking to rework the congested cellular rooms of their home, in order to create generous living spaces where cooking and play might coexist. Located in Isleworth in the London Borough of Hounslow, the family had occupied their end-of-terrace, interwar home for a number of years before appointing architects James Alder and Thom Brisco of Alder Brisco in September 2018. The project was completed by Alder Brisco in March of 2020.

Like much of the housing in the surrounding neighbourhood, and of the period, the house is constructed in a common Fletton brick, where lintels are also openly expressed within the masonry. Render is typically applied only to the upper levels of these homes. Each end of terrace property is finished in a hipped, tiled roof where the terrace meets a shared side alleyway.

Central to the success of the scheme would be the navigation of an existing 1.3 metre drop from the internal ground floor level to the lawn and beds of the lower rear garden.

The Scheme.  The home’s original ground floor plan was arranged with a clear zoning strategy that positions the larger living spaces along the western party wall; while secondary, ancillary, and circulatory spaces sit to the east. This relationship then determines the size of both the front and the rear façade’s openings, where entrance doors enter narrower secondary zones, whilst a bay window and wide patio doors serve the larger living spaces. In recognition of this established pattern, the scheme unifies a reworked ground floor plan within the extension’s massing and fenestration hierarchy, as well as providing a heavily reworked garden landscape design.

The extension’s massing is lifted to the west to create a volumetrically generous dining space with a tall sliding glazed door and roof light. Beyond this threshold, a brick terrace forms broad steps, flanked by planters, where family and guests can rest, enjoy the garden, and eat at the lower patio’s freestanding table area. With an unbroken route running from the front of the house through to the garden beyond, the western party wall remains host to the home’s principal living activities.

The extension drops in height to the east, much as the hip does at roof level, and responds to the neighbouring properties. The change in height is expressed internally where lintels span from the front to the back of the extension in alignment with the ground floor’s remaining partitions and the home’s traditional spatial pattern. A new glazed door provides regular swift access to the garden, with steeper stairs dropping down to this level. A brick and lintel-built garden gateway and wall form the third mass in this stacking of masonry forms toward the garden.

Given the financial constraints of the project, an economy of means was developed using standardised building components throughout. These were purposely utilised, with the broadest off-the-shelf lintel spans selected to maximise both the volume of the extension and the scale of the rear opening to the garden. Fletton bricks are used to build both internal and external walls, while flush, stacked concrete lintels and copings are left exposed throughout. Notched timber joists and a plywood deck complete the stepped soffit of the scheme internally.

The line of the original rear façade now marks a soft threshold between the kitchen and the new dining area, with a drop of two steps that begin a gentle fall towards the garden. The kitchen’s principal work surfaces are arranged to address both the front living space and a new rear dining room, ensuring the engagement of family members preparing food with the surrounding activity of the home. The full width brick terrace completes the route to the garden with its integrated planters sandwiching the dining space between the green of the simple panelled kitchen and the growing garden below.