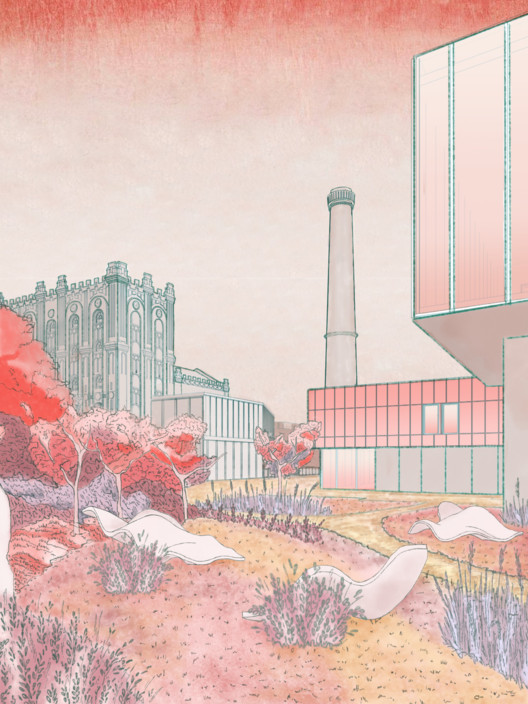 The CANactions youth competition was launched in 2009 by the Dessau Institute of Architecture (DIA / Germany) and CANactions School. The competition has become a professional "path to Europe" for Ukrainian students and young professionals. Since its launch, more than 1,200 projects have been received, among which 129 finalist projects have been selected by members of the international jury. This year's winner was Dmytro Yahodin with a reconstruction proposal for the Rikhert brewery in Kyiv.

Rikhert brewery is located in the capital of Ukraine in Kyiv, in a historical district called Podil. There are many establishments and institutions with different functions. Podil is functionally divided into two parts. The first is full of features and balanced. The second is less developed with a predominantly industrial zone.

The building has a great history. The brewery in Podil was founded in 1860. The colonist of the Volyn province, German Wilhelm Richert, received permission to build a brewery on his site. The new Art Nouveau building was designed by the architect Nikolai Kazansky in 1908. The building is tiled with very spectacular and beautiful lace brickwork. Unfortunately, today the building is abandoned, most of it is destroyed.

The project proposes the restoration of the historical and architecturally valuable part, adapting for new function and also the construction of a new building. This approach assists to save historical heritage and architectural identity. The task of revitalizing Rikhert brewery is to create an art cluster. This typology of the building combines the two main functions of business and culture.

The idea of an art cluster implies the creation of a multifunctional space for public use. The first zone assumes such activities as meetings, communication, breaks, and also the possibility of exposing exhibitions. This is realized in the square in front of the historic building and the restaurant terrace. The second zone includes such functions as holding festivals, fairs, concerts. For this, a square between two buildings has been designed. Lectures and presentations take place at a small amphitheater with a platform in the third zone.

The old building is planned to be converted into offices. In total, there can be located six offices for rent. In the high inner space of the first floor, it is planned to place a lobby with a mezzanine in it. An extension is made behind the old building. There is a restaurant for lunch.

The new building is located at the back of the site. the method of disguise and submission is used in the design. The new building hides behind the old one. The composition of the building is simple and the volumes are proportional to the historical part. The facades are in harmony with the old building. Similar surface segmentation is used to achieve this. Steel panels with rusty texture are used as cladding material.

The functional diagram of the new building is simple. It has a main atrium core that is vertically pierced through all four floors. It is spatially connected to the exhibition halls that are located on each floor. They can be used for various exhibitions. There are also workshops and art studios. In addition to cultural activities, there is a big coworking on the ground floor. The main room in the building is a large hall for 130 people. This hall is multifunctional. It can host conferences, presentations, lectures, and also theatrical art, film screenings and performances. This hall is seven meters high and the volume is sheathed with polycarbonate panels.