Conceived during the tumultuous years preceding the Spanish Civil War, the Zarzuela Hippodrome came about through a public contest sponsored by Madrid's Office of Suburban Access, who hoped that the winning design would replace the dilapidated Hippodrome located in Paseo de la Castellana.

In order to expand the Castellana-Recoletos, one of Madrid's main thoroughfares and the cornerstone of its growth in the 1930s, it became imperative to demolish the old hippodrome in order to make space for the Nuevos Ministerios government complex. For the new hippodrome, the planners sought out a more remote and suitable location, eventually deciding on a 115 hectare plot of land close to Monte El Pardo, on the northern outskirts of Madrid, where it would have the necessary space but also be connected to the city center via public transportation.

Nine projects were entered in the contest, with the winning team consisting of architects Carlos Arniches and Martín Domínguez along with engineer Eduardo Torroja. 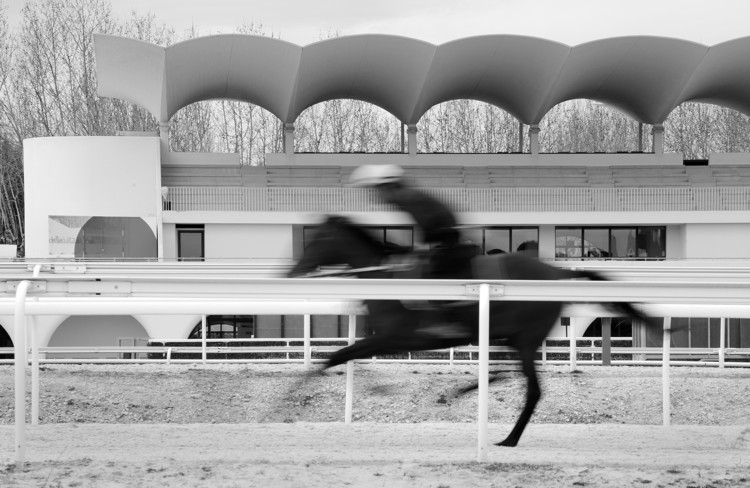 The winning entry was praised for its novel and refreshing approach to the complex project, an approach that emphasized functionality as well as rationality and struck the perfect balance between the neo-regionalism and rationalism movements. A focal point for the designers was the relationship between the spectators and the horses, that they should always have visual contact (to promote betting, the end-all, be-all of the race) but not interfere in each other's spaces. The proposed design was a metallic structure that meshed well with the topography of the land it was situated on and mixed modern abstraction with the forefront trends of the time.

Work on the project soon got underway. By the end of 1935, all that was left to do was to close off the perimeter of the complex and the galleries. In 1936, with the outbreak of the Spanish Civil War, the project was put on hold, but eventually completed under the direction of military personnel. During the war, however, the hippodrome suffered damage from a nearby battlefront and was later repaired by Eduardo Torroja. The Nationalist government then revoked the architectural licenses of Martín Domínguez, who went into exile in Cuba and also worked in the United States, and Carlos Arniches, who remained in Spain under official ostracism by the government, which would not be lifted until the end of his life. In 1941, two years after the civil war came to an end, the official inauguration of the Hippodrome took place.

In the end, the complex was built using enforced concrete rather than the metallic materials listed in the proposal. In general, it keeps to the typology of the original plan, but alterations were made to the spaces between the spectators and the horses. The singularity of the marquees that cover the three galleries are known worldwide and became the most recognizable facet of the building.

Torroja took the project to the limits of feasibility with his calculations and measurements but his knowledge of concrete and its structural properties resulted in a bold eye-catching gallery that hit the perfect balance between aesthetics and safety. The asymmetry of the section balanced out the weight of the marquee and the vault while a guyed facet supported the covering over the betting booths and upper gallery without obstructing the view of the paddock. The result was simple and straightforward, with a great deal of plasticity.

After years of deterioration and neglect, during which the building suffered a multitude of interventions that tarnished its singularity, a contest was announced in a bid to rehabilitate the Hippodrome in 2004, a contest won by architect Jerónimo Junquera

Junquera's main goal was to revive Arniches, Domínguez, and Torroja's original ideas for the project, by reestablishing the image of the building by doing away with the alterations that took away its original look. This included separating the racetrack and the spectators' spaces without letting one outshine the other. The objective of the project was ultimately to ensure the Hippodrome's profitability in the 21st century which required new functional requirements with new installations, including patios and green areas. This also meant revamping the marquees and galleries, cleaning up and revitalizing the structure so as to allow free movement that wouldn't interfere with the architectural elements. All of this was done with the materials originally used to build the Hippodrome, in keeping with the original spirit of the project.

The result of this revitalization can be seen and appreciated with the images accompanying this article, taken by photographer and arquitect Ana Amado, in which black and white photographs take the modern-day Hippodrome back to its inception. This is done in homage to the project and its authors, the forgotten architects who birthed it, giving them the recognition they so richly deserve.

Ana Amado (Ferrol, A Coruña, Spain) is an architect, photographer, and visual artist. Her personal photographic projects focus on architecture as the backdrop for addressing social issues such as the economic crisis. Her work has received both national and international exposure. Her collective project “Spanish Dream” formed part of the Spanish Pavilion at the 15th Venice Architectural Biennale 2016.

Andrés Patiño Eirín (A Coruña, España) is an architect and one of the founders of aj Architects. With an interest in construction, research, and professional work related with industrial architecture, rehabilitation, and housing. He consciously denies the idea of an architect as a specialist. 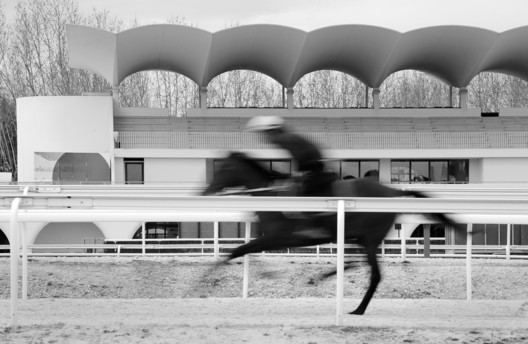 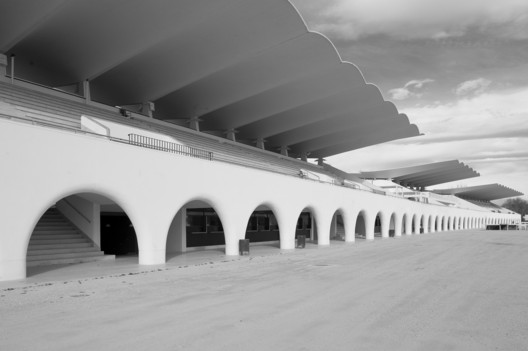