Save
Mirrors in Architecture: Possibilities of Reflected Space
Share
Or
Copy 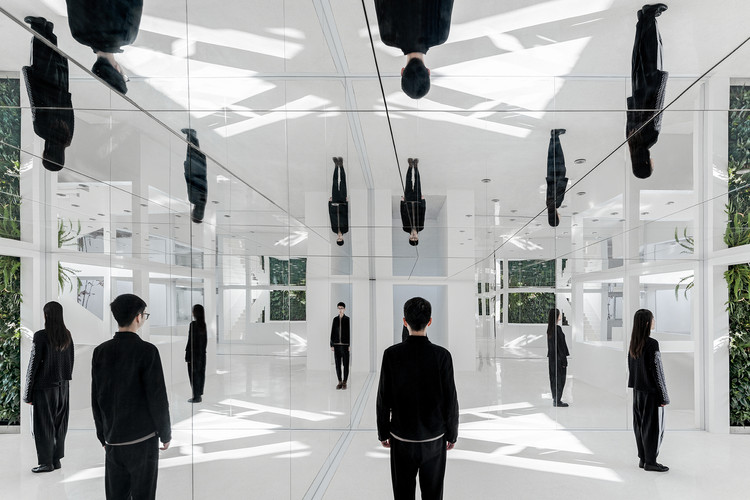 How Are Mirrors Made?

In the fashion of the Venetian manufacturers of the early 13th century, the typical mirror today is made by attaching a sheet of glass to a thin layer of metallic backing. While Venetian workmen at the time tended to use tin, however, most manufacturers today apply either silver or aluminum. In 1835, Justus Von Leibig discovered the modern process of silvering, which involved spraying a thin layer of silver or aluminum onto the back of a sheet of glass. This procedure allowed for the mass production of mirrors and rendered the product far more affordable to the general public. The contemporary method of mirror-making is yet another offspring of this process, and involves heating aluminum or silver into a molten state before sputtering it onto a plate of glass.

During this process, the glass sheets are polished to perfection to ensure that there are no dips or impurities, which would cause distortions in the reflected image. Similarly, the back surface of the mirror is usually painted to prevent damage to the metal coating. For typical household use, architects must consider the thickness of the mirror, which increases proportionately to the strength of the mirror. For more heavy-duty applications, the mirror must be designed in a particular way depending on the use. Usually, a coating is applied to improve durability and reflectivity.

In ancient times, most mirrors were maximum eight inches in diameter, and used primarily for decoration. However, a notable exception was Pharos, the lighthouse of Alexandria, which boasted a large metal mirror to reflect sunlight during the day. This would remain one of the most prominent global examples of mirrors in architecture for centuries.

Much later, in the late 17th century, Louis Le Vau would design the famous Hall of Mirrors at Versailles, which housed 357 mirrors and challenged the former economic monopoly of the Venetians on mirror manufacturing. As mirrors were still rare and expensive, this incorporation constituted an immense show of wealth by the French monarchy in addition to its aesthetic function of reflecting the expansive gardens outside.

Following these out-standing examples of mirrors in monumental architecture, these versatile elements were increasingly incorporated into comparatively vernacular architecture, and in Western countries a tradition was established of incorporating mirrors over the home mantelpiece. Enclosed in elaborate frames decorated with floral patterns or classical ornaments, these pieces were primarily decorative, although the later invention of the cheval glass, a freestanding full-length mirror, saw it used in a more functional fashion. At this time, the French circular mirror, typically enclosed in a neoclassical gilt frame, was also extremely popular.

Following this proliferation of mirrors in neoclassical interior design, we finally reach the modern era, which has seen even more innovation in the way mirrors interact with architecture. Paired with LED lights and minimalist surroundings, functional bathroom mirrors and decorative sets now feel clean and modern in comparison to their elaborate neoclassical predecessors. Designers have the means to experiment with unconventional shapes, and the strength and durability of mirrors have improved so much that they may cover large furniture surfaces or even the façades of buildings. With the development of new technology that allows for such flexibility, contemporary architects should consider certain recommendations for how to incorporate mirrors into their work.

Tips for Designing With Mirrors

Depending on the size, shape, placement, and ornamentation of a mirror, it can serve a variety of different aesthetic and functional purposes in an architectural setting. While architects should consider the specifics of their own project as the foremost design motivator, and should not be afraid to experiment or innovate, we have compiled several recommendations applicable to several situations for how to design with mirrors.

One of the most commonly cited uses of designing with mirrors is to open up the space. A large mirror can make a small room feel much larger than it is, particularly if the mirror encompasses an entire wall, is placed in a central location, or even if it is shaped like a window to create the illusion of openness. To apply this trick with the most success, however, architects must also consider the lighting. Mirrors should be placed in areas where they can best reflect natural light coming in from windows, making the space feel both more open and brighter. In the shot below of a mirror in the Lyceum University Building Conversion, a large circular mirror placed in a darker corridor reflects areas of the space with more natural light to both widen the narrow hallway and make it appear brighter. Paired with white walls, the design is minimalist and soothing.

Mirrors don’t only have to reflect bright areas or windows, however – they can also be used to accentuate the architecture by reflecting interesting angles or spaces. This effect can be difficult to achieve, but when done well, can truly elevate a contemporary space to appear even more well thought out. In the following bathroom from Casa Edgar St., the mirrors reflect the convergence of three different colors and materials from the walls and ceiling of the room, accentuating the angularity and materiality of the design.

For a more artistic effect, architects can use lights and shapes to create statement mirrors that dominate and beautify a space. The following circular mirror in the PandaDoc Office, through its illumination with a colored light, plays a similarly decorative or eye-catching role as hanging an expensive artwork in the same spot would have done. Likewise, the unusually shaped mirror below, from MoDusArchitects’ House on the Hill, transforms an otherwise standard bathroom into an especially edgy and contemporary space.

Architects can also design with mirrors by combining aesthetics and functionality. A common example would be to add statement LED lighting to bathroom mirrors: these lights are not only eye-catching, but they also have the practical function of illuminating users’ faces and allowing them to do their makeup, fix their hair, or apply skincare with more precision. Likewise, large mirrors on wardrobes and closets can help open a space and reflect light as stated above, but they serve additionally as full-length mirrors for users to check their appearance and pick outfits.

Of course, these examples only pertain to interior uses of mirrors. For architects wishing to experiment with mirrored facades, the possibilities are equally endless. Just as interior mirrors placed opposite windows can help bring the outdoors inside, so do mirrored facades project the outdoors over private interiors. This choice is often most effective for isolated structures in expansive natural spaces such as forests or grassy plains. Rather than interrupting the beauty of the natural environment with artificial designs, architects in these cases simply allow nature to speak for itself. However, not all structures with mirrored facades have to be in entirely natural spaces.

Bandesign’s famous coffeeshop in Gifu, Japan is surrounded by other buildings, but uses its mirrors deliberately to reflect artificially planted cherry blossoms, amplifying the effect of these beautiful native trees.

The possibilities for designing with mirrors are endless, and contemporary architects have the opportunity to experiment more as new developments in technology continue to develop. Whether they serve simply to accentuate an existing structure or to dominate a new design, mirrors are versatile and potentially eye-grabbing elements that can elevate architecture to new levels. 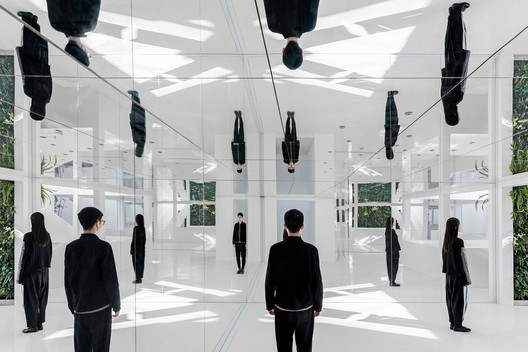