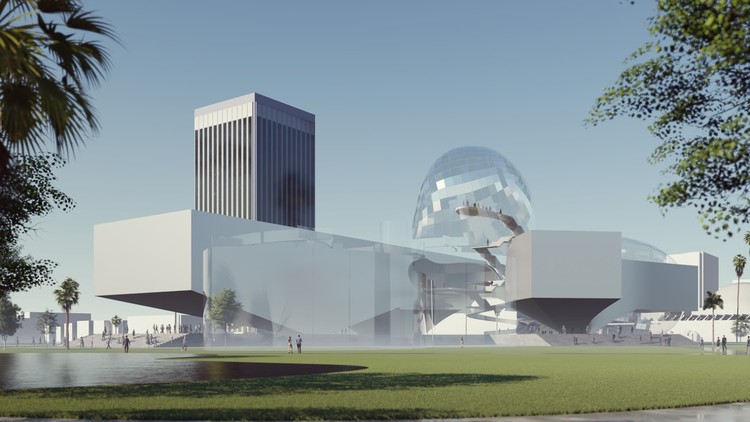 While three of the selected projects propose to build from the ground up, the three others recommend working with the existing architectural fabric. Nevertheless, all of the designs, according to the jury, “correct problems that are inherent in LACMA’s current scheme designed by Atelier Peter Zumthor”. Some of these common approaches include enlarging the exhibition square footage, building only on the current site, creating flexible gallery interiors, embracing the surroundings, using conventional construction methods, and cost-efficient design.

Open for public review and vote, the competition aims to “open a constructive dialogue about LACMA’s future by offering creative new workable alternatives that will invite the public into a process that better serves the taxpayers of Los Angeles County and the many people around the world who have loved LACMA’s collections for the past 55 years”, according to the organization co-chair, writer, and designer Joseph Giovannini. In fact, he also states that the proposals are not meant to be built as-is, but to be viewed as inspirations and to be considered as alternatives.

Read on to discover more about the six selected designs.

Emphasizing “an architecture that combines functionality with aspiration,” Coop Himmelb(l)au designed three main elements: landscape plinth and two, three-level “floating” gallery wings. Public circulation on ramps connecting the volumes would be encased by expressive amorphous forms whose openness to the outside refreshes the museum's visiting experience. These public spaces are accessible without a ticket to the museum, but windows into the galleries are meant to entice people inside. The jury appreciated the curatorial flexibility of generous gallery spaces, with 22-foot floor-to-ceiling heights, the possibility of mezzanines and intimate galleries, and open floor plates.

To create greater institutional cohesion, Paul Murdoch Architects took a holistic approach to the entire LACMA campus and its relationship to the cultural institutions flanking it. The design, according to the architects, is “expressive of LA in its openness, multiplicity of urban, natural, and cultural connections, and abundant use of controlled natural light.” The jury noted how this horizontal skyscraper—an on-axis version of the neighboring tower across Wilshire—corresponds to the urbanism of the area. The east glass façade offers a strong, complementary visual connection to Hancock Park and the La Brea Tar Pits, and the west façade forms a long public plaza bordered by BCAM and the Resnick Pavilion, uniting the two campuses.

TheeAe (The Evolved Architectural Eclectic) considers Los Angeles’ diversity when proposing the museum as “a new cultural platform that connects people from different walks of life,” by simultaneously offering enclosed cultural spaces and an open, sculpted, outdoor landscape. The tall building (five levels plus garden roof) combines an undulating façade along Wilshire Boulevard to the south with a “hill” element sloping into the park on the property’s north side. The jury remarked that the dramatic hybrid design would make it a “destination building” cleverly designed to sustain the urbanity of Wilshire on one side while extending the bucolic nature of the park on the other.

Reiser + Umemoto’s aim was “to create a coherent, retroactive masterplan that builds off the campus’ prior successes and seeks to engage and reinvigorate the full breadth of LACMA’s collection.” The three-pronged approach includes adding new elements in and around the original 1965 buildings, binding them into a new whole. The Cone sits within and atop the Ahmanson; The Bar, an elevated gallery building, transects the campus from north to south, offering an appropriately scaled Wilshire entrance and new gallery space; The Cluster replaces the 1986 building with a series of interior pod-shaped galleries, as well as exterior exhibition space on a reimagined plaza level.

This “reconstitution” is an unusual hybrid of old and new, as it maintains the scale and context of the original LACMA buildings by reconstructing them with modern, sustainable materials, then interconnecting them with a new plinth form punctured by courtyards. Barkow Leibinger stresses this would “provide spaces for art, delight, and public encounter.” The jury thought this flexible, spacious design addressed the changing role of museums by including a good amount of shopping, cafés, and event venues that urbanize the spaces and engender a lively environment.

Replacing the 1986 building, Kaya Design proposes “to preserve the best elements of the past while creating a more contemporary, multi-use alternative space.” An elevated volume that respects the scale of the existing structures has solid walls on three sides for curatorial flexibility, then opens to the north with an all-glass façade. Circulation into the entrance is through a gentle ramp/walkway leading into the lobby that directs visitors to the other buildings on other floors—the ramps equalizing the importance of all adjacent floors. The new structure is reserved for exhibition space on six above-grade levels, including the interior of the spiral element. 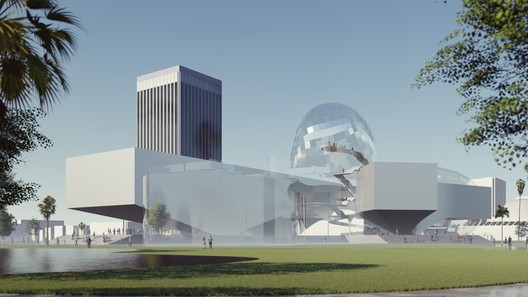