The Rubén Darío National Theate of Nicaragua is both a landmark of modern architecture in Central America and a model for architects the world over.

The Rubén Darío National Theatre was designed in 1963 by José Francisco Terán Callejas, who had been a fixture on the design team of Minoru Yamasaki in Detroit, Michigan between 1958 and 1959. To paint an accurate portrait of the theater's history, it's worth noting that Terán was an associate of the architect Eduardo Chamorro Coronel, a relationship that lay the groundwork for the project and saw to the selection the team that would see to its planning and construction. It was in  1966, during the final phases of the design stage, when Terán became the theater's principal architect and the overseer of its construction.

In 1964, plans for the theater were shown to President René Schick (1963-1966), who immediately threw his support behind the development of the project, including deciding its location and arranging for the preliminary studies to be done before construction could begin.

According to the project report presented in 1964, proposals for the theater's location all focused on how best to revitalize the city's center and centered around the impressive views of Managua Lake as well as the backdrop of mountains and volcanoes. Proximity to Dario Park was also a deciding factor, as it seemed only natural that the theater should be close to its namesake's most important monument. Another location considered is where the Managua Metropolitan Cathedral, designed by Ricardo Legorreta in 1993, stands today.

In its first proposals, the theater was designed to seat 1,500 people and its interior design was centered around a versatile stage that could accommodate everything from opera and musicals to presentations and plays. The building also included spaces for filming, transmission, and projecting while its outside featured plazas and bridges as a way to "connect" the building with the city surrounding it.

However, by 1966 the project's budget was decreased to only 2 million dollars and the theater's design went from a modern, foreign concept to one modeled after the local aesthetic. In this sense, the theater was designed from the inside out, a detail given away by the austerity of the building's exterior and the project's aesthetic transformation.

The interior has three main spaces: the Crystal Room, the Main Hall, and an Experimental Theater. The Crystal Room, along with a view of Lake Managua, contains three Imperial style crystal chandeliers donated by Spain. The Main Hall contains exactly 1,200 seats distributed between 3 balconies and a main floor designed in the continental style. The Experimental Theater, located beneath the Main Hall and planned as a space for local artists to develop their talents, can seat 230 people. News of the theater's inauguration in 1969 made it into the New York Times and it was hailed as the "Best Center for the Performing Arts in Latin America.”

Consultants for the project include Vilhelm Lassen Jordan, as acoustics consultant, and US architect Ben Schlanger as general consultant. Both were involved in the construction of the Lincoln Center in New York, and afterwards the Rubén Darío National Theater as well as the Sydney Opera House. Other consultants include Donald Swinney, who had an administrative role on the project and the Peter Albrecht Corporation which was in charge of the sound systems, lighting, stages, and the theater's acoustic shell.

After a long reconstruction following the 1931 earthquake that devastated Managua, a second earthquake hit in 1972. The RDNT suffered minimal damage to its structure and was one of the few buildings that survived the quake. It's for this reason that the Ruben Dario National Theater is an icon, not only for its social and architectural value, but also as a building being renovated to withstand time and to tell its own story.

This year, 2020, there will be a publication commemorating the 50th anniversary of the theater's construction. 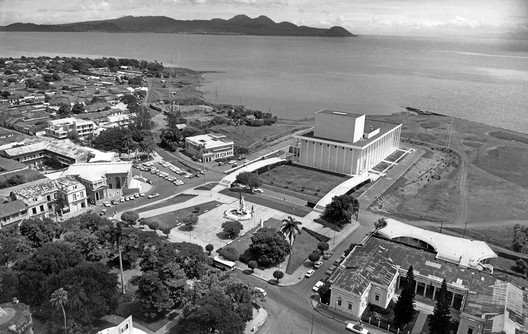