Save
How Will Autonomous Vehicles Impact Cities?
Share
Or
Copy

It is only a matter of time until algorithms take the wheel. While the first autopilot system for vehicles was developed 3000 years ago by sailors attaching weather vanes to tillers, the last 10 years have seen unprecedented growth in interest and effort towards AV (autonomous vehicles). Today, autonomous vehicle tests are underway in 36 US states, while it is estimated that the technology could replace 90% of vehicles in cities such as Lisbon, Portugal and Austin, Texas.

But how will autonomous vehicles change cities? That is one of many questions posed by the MIT Senseable City Lab. Over recent years, the Lab, directed by Carlo Ratti, has conducted a series of experiments and studies which speculate on future scenarios for urban life. Below, we have outlined some of their findings on how advanced vehicle technology will change how we live, and where we live.

Car parking spaces could reduce by 70%

Car parks are a ubiquitous typology in urban centers. However, in a future of autonomous vehicles, cars may no longer need to sit idle, waiting for their owner to return from work or socializing. Using data from Singapore, the Lab’s “Unparking” study found that autonomous shared cars, which pick up and drop off multiple owners per day before finding a free parking spot, would cut the need for cars In Singapore from the existing 676,000 to 200,000. This would reduce the need for car parking spaces in the city from 1,370,000 spaces today to a potential 410,000, marking a 70% reduction. In other words, the existing 15.8 sqkm of parking space in the city today would reduce to 4.7 sqkm. As autonomous vehicle technologies improve, so too will the potential vacant land for development increase.

Traffic lights will change or disappear

Traffic lights have existed for 150 years, with little design development or evolution. However, autonomous vehicles may change this. The Senseable City Lab worked with ETHZ and the Italian National Research Council to develop a slot-based intersection system to replace the traffic light. Under the system, sensor-rich, self-driving vehicles pass through intersections by communicating with and remaining at a safe distance from other vehicles, echoing the slot-based system used by air traffic controllers. Results show the system could double the volume of vehicles that could flow through intersections at a given time, compared to the existing traffic light system.

Taxi fleets could reduce by 40%

What is the minimum number of vehicles needed to serve all the taxi trips in New York? This was the question addressed by the Senseable City Lab’s “Minimum Fleet Network” model. While existing taxis waste 40% of their time circling cities looking for fares, the Lab proposes a future where algorithms identify passengers and trends, optimizing the taxi fleet. In a separate experiment, Hubcab, the Lab analyzed over 170 million taxi trips in New York City in 2011, finding that ride-sharing could reduce the number of trips made by taxis by a further 40%.

Cars will teach us about human behavior

Today, cars function thanks to over 4,000 sensors collecting internal and external data. To further exploit this information, the Senseable City Lab collaborated with Volkswagen on “Sensing Vehicle.” In the experiment, the team instead repurposed this data to analyze driver behavior and the urban environment. If implemented, the system could reduce car accidents, lessen driver stress, and offer a window into how drivers react with vehicles and each other.

Cars will teach us about the world around them

The data that cars collect about drivers may also offer information about the wider urban environment. In “Driving DNA,” the Lab measured 53 drivers performing 2000 trips, in a wide variety of road types and traffic conditions. The Lab believes that in the future, temperature sensors and wiper activity can inform city operators about weather conditions at a finer level than traditional weather stations. Meanwhile, a car’s accelerometer and brake sensors can measure road quality to not only offer real-time alerts, but gradually identify dangerous areas of the road network. 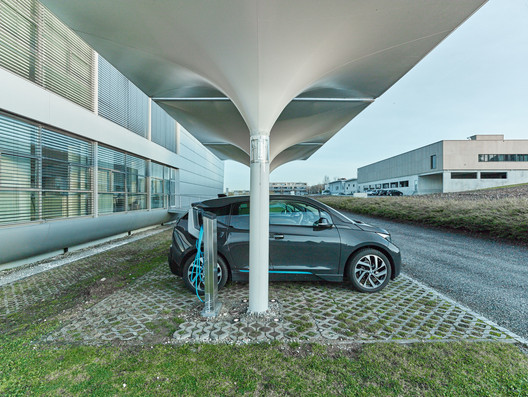